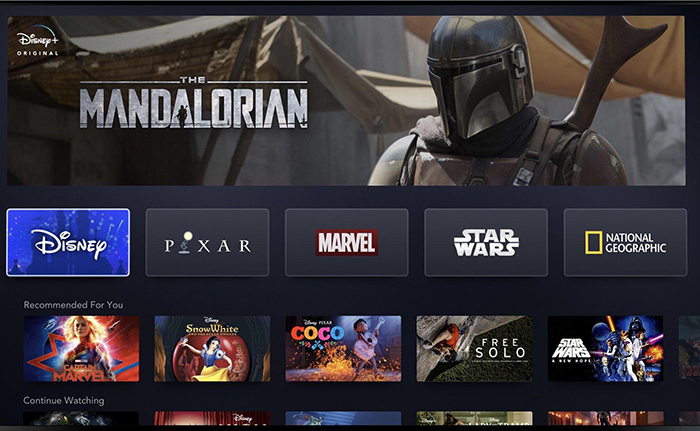 The Walt Disney Company’s CEO Bob Iger held a comprehensive shareholders and investors meeting last night, which dutifully showed off every aspect of the studio’s forthcoming streaming service Disney+, and answered plenty of questions about the venture.

What Exactly Will Disney Be Putting On There?
Well, that’s where the surprises start. At launch, Disney+ will include 7,500 episodes of current and off-air TV shows, 25 original series and 10 original movies and specials, as well as 400 library movie titles, and 100 recent theatrical film releases. The exact specifications of just what those are to be is being held back slightly, but screenshots released to the press of the app showed off newer Disney flicks such as Frozen, Moana, and Coco, whilst Iger spoke at length about including every animated classic from the Disney vaults (Snow White and the Seven Dwarfs can be spotted on the new images, and Iger specifically mentioned 1950’s Cinderella). One of those original series is also announced to be a soft-reboot of the High School Musical franchise, and a live-action Lady and the Tramp remake will be exclusive to the app.

What Kind Of Presence Will Marvel Have On The App?
To but it mildly, a big one. The app organises its offerings into five categories; Disney, Pixar, Marvel, Star Wars, and National Geographic. The platform will eventually become the streaming home for the Marvel Cinematic Universe, both with feature films and new original series. Of those series, we had confirmation of the titles for the live-action shows Falcon & Winter Soldier (the show centred around Anthony Mackie and Sebastian Stan’s characters) and WandaVision (the series following Elizabeth Olsen’s Scarlet Witch, and Paul Bettany’s synthetic android).

“These will be both new and continuing stories,” Marvel Studios Chief Creative Officer Kevin Feige said at the meeting, “These will be major storylines set in the MCU with ramifications that will be felt both through the other Disney+ series we’ll be producing and the future on the big screen.”

The platform will also debut What If, an animated series that will feature voice talent from Marvel’s big-screen projects, and ask hypothetical questions about how things could have been different in the movies. The first episode will ask what if Peggy Carter had taken the super soldier serum, leaving Steve Rogers (our Captain America) as a scrawny asthmatic who joins the war in a metal suit created by Howard Stark.

Falcon & Winter Soldier will release during the first year of the app, with WandaVision, What If, and a live-action Loki show launching in the second year (a Hawkeye series has also been announced, but wasn’t touched on at the presentation, leading many to believe it may be a year three project). At launch, the streaming service will only have three MCU films, but that number is promised to grow to the full library across the initial two years of launch.

What Can We Expect From The Star Wars Side Of Things?
In a similar fashion to how The House of Mouse want Disney+ to be the home for the MCU, they also want it to be consumers’ one-stop for all things set in a galaxy far, far away. Not only will the service have every Star Wars movie, every season of the animated Star Wars: Rebels and Star Wars: Clone Wars (including an exclusive seventh season of the latter), but it will also have brand-new live-action shows such as The Mandalorian, and the presently-untitled Rogue One-spinoff show centred upon Diego Luna’s Cassian Andor. The latter “will be a thrilling spy series set in the Star Wars universe,” according to Lucasfilm boss Kathleen Kennedy, and will also see the return of Alan Tudyk’s fan-favourite droid K-2SO.

Iron Man director Jon Favreau was also on hand, to talk about The Mandalorian (on which he acts as showrunner), saying that: “We’re pretty deep into the heavy lifting of turning all of that wonderful photography and all of those stories into one continuous season of eight episodes,” both confirming the episode count, and that the series would be ready for the app’s launch. The series is expected to explore the lawless transitionary period between the fall of the Empire (from 1983’s Return of the Jedi), to the security of the New Republic (2015’s The Force Awakens), through the eyes of a Mandalorian bounty hunter (Pedro Pascal). Favreau showed off footage to investors, that is expected to be revealed to the public tomorrow, at Star Wars Celebration Chicago.

What About The Simpsons?
In a baller move, Disney+ will host all 30 seasons of their most famous, recent new acquisition, available at launch.

National Geographic?
Documentaries and limited series, both original and archived, are expected to be available at launch – including the sure-to-be-popular series The World According to Jeff Goldblum; a nature show where the delightful thespian is paid to walk around and be astounded at the world we live in. Expect to see this one gif’d to hell within the first hours of the service’s launch.

Okay, Sure, This All Sounds Great, But How Much Is It Gonna Cost?
And this is where Disney has thrown down the gauntlet. $6.99 a month. Considering Netflix’s standard single-screen packages start from $12.99, and HBO Go is $14.99, $6.99 is a veritable middle-finger to the competition, and a sure-fire selling point for millions of consumers. In the UK, that number is expected to stay the same, merely exchanging a dollar sign for a pound.

Alright, Neat, When’s It Release?
Slightly more complicated to answer. If you’re in the US, there’s a solid release date of November 12th, 2019. However, for the rest of the world, the answer is slightly more nebulous. Within two years, Disney is aiming to have Disney+ rolled out internationally, but they’re being a tad cagey on the specifics.

As for why they aren’t just releasing Disney+ globally at the same time? Different regions have different expiry months for streaming rights, which Disney has to wait out to regain all of its titles to fill the service.

Regardless, after the initial North American launch, the service will roll out to Western Europe and Asia-Pacific regions starting at the end of 2019 and into early 2020, with Eastern Europe and Latin America rolling out before the end of 2020. Now, chances are, the UK counts as part of ‘Western Europe’, but it’s unlikely Disney will want to hold back the service for too long in English-speaking countries (the longer the service is retained, the more likely it is that those all-important launch projects that are supposed to entice new customers will be pirated by those desperate to see them). However, there’s still no solid date for these things as of right now. Expect more answers in the coming months.