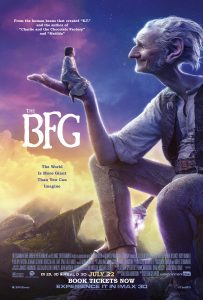 Roald Dahl would have had a ball with texting.  At a time when OMG, WTF and FYI have been elevated from text speak to part of the language, one of his best-loved stories comes to the big screen, complete with a title in the same vein.  ‘The BFG’.

Not that the setting is contemporary.  It starts off sometime in the 50s, if the clues are to be believed, and somewhere along the line finds itself in the 80s.  How?  We’ll never know.  But this is a film that wants you to just suspend your disbelief, follow the story and let your inner child take over.  In other words, a Spielberg movie.

Sophie (Ruby Barnhill) lives in an orphanage.  But that all changes one night when she encounters a giant (Mark Rylance), who scoops her up and takes her to Giant Land.  He’s not as intimidating as he looks, but gentle, kind hearted and even timid at times. More worrying are the other giants.  Led by the graphically named Fleshlumpeater (Jemaine Clement), they bully him, wrecking his home, and refer to him as Runty, because he’s actually a lot smaller than them.  So Ruby comes up with a plan to put them in their place forever.

This is very much a film of two halves.  Part one takes us to the world of Giant Land, where we get to know The BFG and see at first hand his problems with the other giants.  There’s other important details as well, such as his dream collecting job, which produces the prettiest scenes in the film.  And the crucial fact that the other giants love eating children and come equipped with the uncanny ability to sniff them out.  The BFG, on the other hand, has a different attitude to children and is vegetarian, living mainly on snozzcumber, which looks disgusting.

Surprisingly, it’s as if the first half is a pre-amble for part two, which is when Sophie puts her plan into action.  It involves no less than Her Majesty The Queen (Penelope Wilton) and it’s where the film really picks up the pace and gets some magical sparkle into the bargain.  Until now the story’s been little more than standard fairy story stuff, but now we’re really in the realms of fantasy: Her Maj meets The BFG and invites him to breakfast, which is served to him in the most resourceful and imaginative of ways.  At this point, the movie has a real twinkle in its eye, with Wilton as a kind and understanding Queen who isn’t afraid to pull a few royal strings.  Although, as the setting is now the 80s, the Boris she chats to on the phone isn’t the new Foreign Secretary.

‘The BFG’ comes complete with some typically Spielberg touches – the neglected child with no parents, the bullying, the youngster who sorts things out – so the marriage between author and director is a natural one.  And it has a perfectly chosen cast, with the CGI’d Rylance eminently loveable in the title role as the big eared giant with a Suffolk accent (there’s a reason for that) and extraordinary vocabulary.  Ruby Barnhill is an intelligent Sophie, but never so knowing that she becomes irritating, while Wilton has just the right regal touch.

But there are times when the CGI lets the film down.  In close up, the bullying giants look artificial, but the moment when it really clunks is when the Queen’s corgis have slurped some frobscottle (a fizzy drink with bubbles that go down instead of up and much loved by giants for its after effects) and they feel the inevitable results coming on.  They look straight at the camera and, while it’s still one of the funniest moments in the film, it’s also glaringly obvious that they’re not for real.  It nearly spoils the whole scene.

‘The BFG’ may not be Spielberg at his absolute best, but he’s not too far off, transporting us into a whole new world and inviting us to be big kids for an hour and a half.  It’s also his second film on the trot with the Oscar winning Rylance and came about on ‘The Bridge Of Spies’ set, as the director revealed at the film’s press conference over the weekend. Rylance thought he was being shown the script just for his opinion ……..