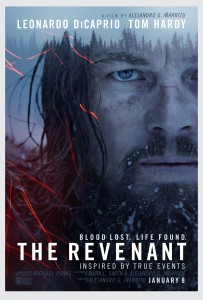 The idea for The Revenant is more satisfying than its realization. It’s a fact many of us who have been looking forward to the film likely realized before even watching it, but nonetheless the reaction to this realization is still one that feels it witnessed something unique, or special at the very least. Throughout the course of the film I couldn’t help but to keep coming back to the thought that the huge amount of effort that was so clearly put into the making of this film deserved to be seen multiple times, countless times even, but in trying to come up with a time in which I might actually want to sit down and experience this again I came up with little desire. That this was also director Alejandro González Iñárritu’s follow-up to his Oscar-winning Birdman factors into the mystique of the idea of how great this film might be, never mind the fact he was collaborating with the likes of Leonardo DiCaprio and Tom Hardy. And so, the “what if” thought came to mind in the form of, “what if this were made by a no-name director?” Would it be met with the same expectation? Would reactions be as critical to the leanness of the story or would the beauty of the cinematography allow that to be forgiven? Obviously, this is not the case and thus the film will be viewed and criticized for how it stacks up against Iñárritu’s past works as well as the fellow awards fodder that is being released this year, but despite all of these factors that inform the here and now, the initial reactions to the film, The Revenant feels like a movie that will be around for a long time. It is a movie that will be discussed not for its large themes or the depth with which it conveys this rather simple and straight-forward story, but more for what it was able to accomplish in bringing beauty out through such brutality. That, in its own way, it was able to deliver as visceral an experience as one could have with a motion picture. This is a movie not meant to elicit a lot of intellectual pondering, but more an experience of the emotions that you drink in, let settle, and then decide if it’s for you or not. My palate seems to have come to the decision it appreciates the taste more than it necessarily enjoys it.

Based in part on the novel by Michael Punke, The Revenant is set in 1823 as a group of fur trappers, led by explorer and navigator Hugh Glass (DiCaprio), are set to make their way home, but are attacked by a group of Native Americans while still working. In the wake of this attack, the group’s leader, Andrew Henry (Domhnall Gleeson), turns to Glass and his tracking skills in order to navigate the survivor’s home. It is on this winter-drenched trek that Glass’s decisions begin to upset fellow trapper Fitzgerald (Hardy) as well as give way to a brutal bear attack that leaves Glass left for dead. It is in this basic set-up that the film thrives and moves forward. At two and a half hours the film is more or less broken down into three sections and at this pace Iñárritu really allows for the film to breathe and find itself among the journey it is taking the audience on. In this way, the film is much like the writing process. Most of the time, whether it be with a paper, a work of fiction or especially in a review or editorial-the author discovers thoughts and ideas they didn’t realize their brain was thinking as they continue to put words on the screen (or pen to paper). New revelations are made, new ideas are developed and sometimes such self-discovery even leads to a clearer picture of what the goal of the piece is; this is how The Revenant feels in terms of its own themes. As the film progresses and DiCaprio’s Glass comes to experience different events in navigating his way to a place that might give him something close to the revenge and redemption he so desires he comes across his own set of realizations. There are multiple allusions to God and sacrifice while only mentioning as much once in a repeated line that goes, “revenge is in the creator’s hand.” It’s unclear what exactly Glass believes in or if he believes in anything at all, but in these moments of near clarity in the midst of personal chaos we glimpse the weightier ideas of what the point of life might be if what we have to do in order to survive doesn’t make it worth doing so.

Restrained by an injury during the bear attack DiCaprio’s Glass is left unable to speak for the majority of the film. Of course, this leaves DiCaprio, the actor, with only a certain amount of tools to convey the necessary emotions. This is the kind of challenge we have come to expect DiCaprio to take on though, and he parlays this already challenging task into what are essentially the only substantially emotional moments in a film that is always beautiful, but rarely as emotionally engaging or fulfilling. Were Iñárritu able to bring the weight of the story or it’s themes up to the same level of his visual grandeur he might have had a master work on his hands, but as it is DiCaprio is the only other element that is able to match the beauty of the look of the film. As the second hour of the film more or less documents the turn of events that allow Glass to remain alive in the relentless winter landscape we watch as DiCaprio communicates a surplus of emotions that allow us to cling to the hope something good might actually come from all this depravity. Speaking of depravity, while the Native Americans are made to be the initial antagonist’s of the picture the real evil here is that of Hardy’s Fitzgerald. In a role that plays to the actor’s strengths Fitzgerald is an unrelentingly foul being. We are only given slight insight into who this man is, what he’s come from, and what he’s been through to form the person he is at this point in his life, but from the get-go it’s clear he is the one that will be the downfall of not only those closest to him, but himself. Given there is no redeeming quality about this guy the character could have been more complex so as to make the final half hour carry more force, but as it is, the film seems so intent to focus on Glass’s state of mind that it short changes the most interesting of its supporting characters. Not to short-change them myself, Will Poulter (of We’re the Millers fame) is quite good as the consciously conflicted Jim Bridger and Gleeson does what he can to create a fully realized human from his limited screen time. This is DiCaprio’s show though, and he indisputably owns every moment he is on screen.

With the idea behind Birdman being to capture everything in one continuous shot the idea behind The Revenant is to take things a step further and shoot the entire film in all natural light in the inhospitable Canadian wilderness. Through these ideas and decisions Iñárritu has developed a film with cinematographer Emmanuel Lubezki that is worth the price of admission for the opening sequence and last half hour alone. The opening scene in which our camp of fur trappers falls prey to a tribe of Native Americans on horseback who fire arrows with unbelievable intensity is nothing short of breathtaking. Lubezki’s camera scours the terrain searching for the most brutal and disturbing images it might relay to the viewer. Much of this is again captured in one continuous shot as Iñárritu clearly wants us to fully immerse ourselves in this world and this time period, becoming familiar with the kind of landscape and hostile situations that are possible at any turn before giving us any indication of what the narrative might be. Much like the opening sequence there are others, especially one featuring DiCaprio fleeing on horseback while shooting at his pursuers before going over a cliff, which make one wonder how such intricate and potentially dangerous shots were conceived much less accomplished. Like these particular sequences the film overall works in fits and starts bringing in high tension, unimaginable grief, and moments where the ideas of honor and betrayal are given genuine heft while other times, and for long stretches, it can tend to feel aimless. I say that with the realization that this could be intentional as that is likely how Glass felt many times during his journey, but the story itself could have certainly been told with just as much weight as it carries in present form in a leaner fashion. Still, it’s difficult to be critical given the amount of effort and care that has gone into crafting the film. If nothing else, should the film continue to live on, it will, at the very least, display how beautiful our home once was while depicting the brutality of it in the same breath. And as long as this film can grab a breath it will undoubtedly continue to fight to win you over. Huh, maybe I will watch it again soon.