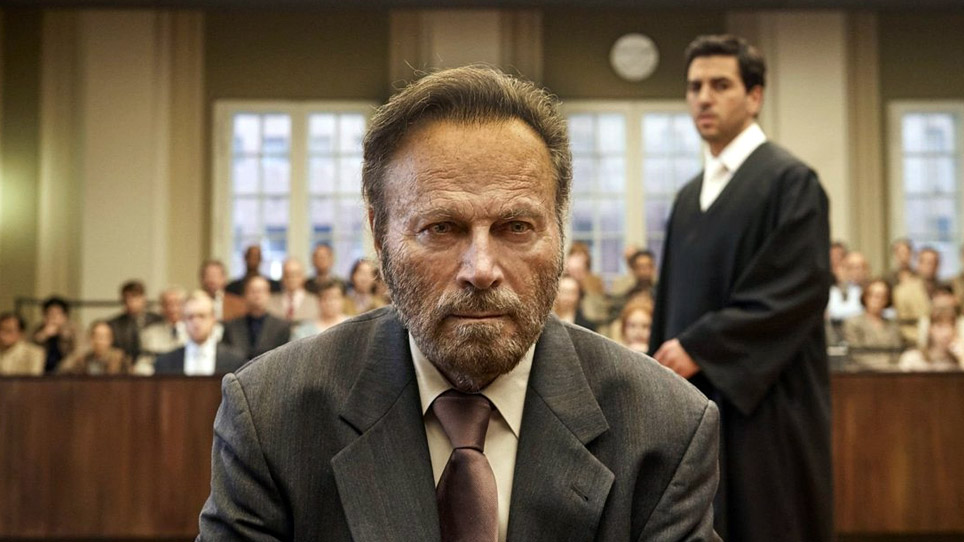 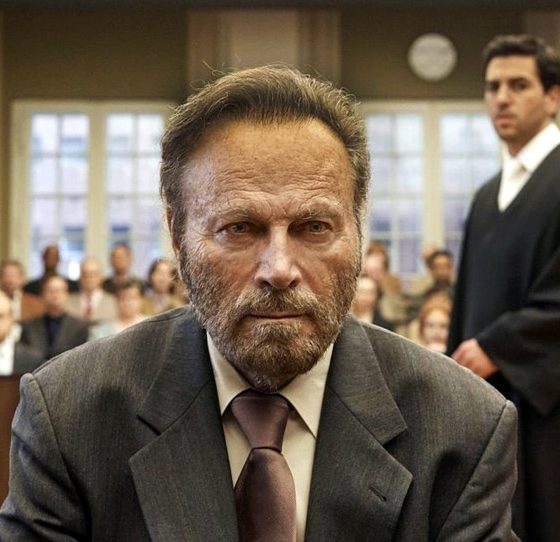 The Collini Case is a sleek, glossy film adaptation of a short novel by German lawyer turned best selling author Ferdinand von Schirach. As elegant and precise as the writer’s prose, this lean, beautifully lit film combines courtroom drama with Germany’s troubled wartime history in a story about personal and national legacy. While the themes are huge and international, there’s an intimacy to the film that works more effectively than a broader canvas might have done.

Opening shots of young Turkish/German lawyer, Caspar Leinen (Elyas M’Barek) keeping fit in a boxing ring are intercut with the steady shuffle of a man of late middle age, Fabrizio Collini (Franco Nero) walking through a luxury hotel in Berlin, making his way to the presidential suite. He is posing as a journalist to interview the occupant of the suite, an industrialist called Hans Meyer (Manfred Zapatka), a Federal Cross Merit holder and the head of Meyer Machine Fabrik, in short, a nationally recognised bigwig.

But there is no interview. We hear the click of a gun and then see the bloody footprints of Collini. He leaves across the hotel’s marble floors as he walks heavily towards a couch and slumps down. He does not attempt to hide his crime and even directs the hotel staff to the suite.

It seems like an open and shut case of a premeditated killing, i.e. a murder.

Leinen qualified just three months, ended up with his first trial as a public defender, the equivalent of an English duty solicitor. That Collini, an Italian immigrant, who has hitherto led a blameless life, committed the crime is not in doubt. His fingerprints are on the weapon, the victim’s blood is on his clothes, brain matter on his shoes, so ferocious was the attack, and there is the testimony of witnesses in the hotel. The question is, what was his motive? Leinen is determined to find out, even if his client doesn’t seem too concerned about his fate.

The situation becomes even more complicated when Leinen discovers that the man his client killed was the benefactor who effectively raised Leinen and put him through college, which allowed him to become a lawyer instead of a kebab vendor, as Meyer’s granddaughter, Johanna (Alexandra Maria Lara) with whom he once had a love affair cruelly reminds him. When she demands to know how he could possibly defend the killer of the man who had so loved him, Leinen replies that if he had been a doctor, he would be obligated to try and save the life of even a serial killer.

To add further to his problems, his opponent in the trial is his former professor, Richard Mattinger (Heiner Lauterbach), a man rumoured to have once cross-examined a witness for 57 days, finally getting the admission he wanted on the 58th day. Leinen seems to be in above his head with the case.

There is genuine mystery at the start of the film. What is behind the killing? Why is Collini so silent and unwilling to help himself? The set-up for dramatic courtroom fireworks could not be better. However, they never fully arrive. Even when we discover the horrors behind Collin’s brutal act and why he committed it, there is a sense of cool detachment in the film, as if analysing the morality of unspeakable acts through an impenetrable barrier which does not allow us to become fully involved.

Leinen is a diligent rather than sympathetic conduit through whom we learn that the revered Meyer may not always have been the benevolent, fairy godfather helping people out. That his connection to Collini ties them to wartime atrocities. That Collini’s act of killing was a desperate attempt to get justice because the legal system itself had betrayed him and his family.

Nevertheless, despite a lack of genuine courtroom drama, this is an absorbing tale that throws up moral and legal conundrums and shines a light on the shameful legacy of hastily passed legislation in Germany that allowed many war criminals to escape justice.

Visually the film is certainly easy on the eye, and it’s beautifully shot throughout. When some heart is added to the closing scenes, the beauty also becomes genuinely moving.

The Collini Case opens in cinemas on 10 September and On Demand October 11 https://www.thecollinicasefilm.co.uk