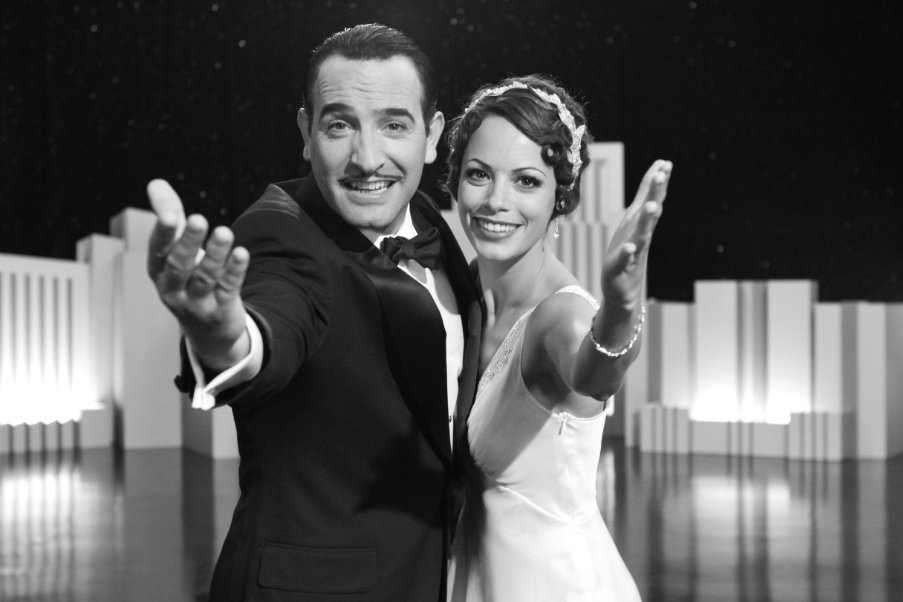 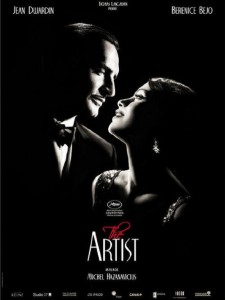 The world of cinema in recent times.. has largely shifted its focus more to pushing and harnessing the technological boundaries of its projects, with story and real substance seemingly playing second fiddle. But we may have just found a saviour or two in the form of French director Michel Hazanavicius and Harvey Weinstein, with this undeniably risky but glorious throwback to the glamorous silent era of 1920’s Hollywood. It’s colourful counterparts released during 2012, get ready to be beaten ‘black and white’.. by ‘The Artist’.

The star at the centre of the captivating story is one George Valentin, played by Jean Dujardin. With his Cheshire cat grin and slick looks, he is the cream of the crop in Tinseltown with his on screen persona significantly made up of old school adventure films. A chance meeting at his latest premiere, with the beautiful Peppy Miller (Berenice Bojo) ultimately triggers a domino effect, of things going against him. Whilst trying to help her lay the foundations for a successful career and strike up a budding romance between them in the process, his career takes an unexpected nosedive.

The year 1929 signals the dawn of the ‘talkies’. Sanctioned straight away by his Kinograph Studios hotshot boss Al Zimmer (John Goodman), Valentin categorically rejects the new format and in an act of serious misjudgement, self finances a cinematic flop. This, coupled with the sad separation from his wife (Penelope Ann Miller) he is left to deal with subject of his pride being badly damaged and now has garnered the ‘washed up’ feeling, At the other end of the spectrum.. Miss Miller’s star is on the rise, but is oblivious to the mental trauma Valentin is going through.

‘The Artist’ has truly captured the visual aesthetics of a bygone era to a tee, with the genius being its simplicity. For example the playful nods to the camera, the inspired ‘on sight’ gags and the remarkably polished and photographic look to proceedings really help to make the experience of seeing such a commodity in a modern day setting, truly unique.

It’s certainly not without some killer performances either. The chemistry that Dujardin and Bojo exude is infectious and the American representation doesn’t let the side down, with Goodman and James Cromwell as Valentin’s chauffeur on terrific form. But the real star of the show, is THAT performing dog.

A film that absolutely charmed my socks off and stole my heart.. A surprisingly poignant, often hilarious, thoroughly joyous treat.