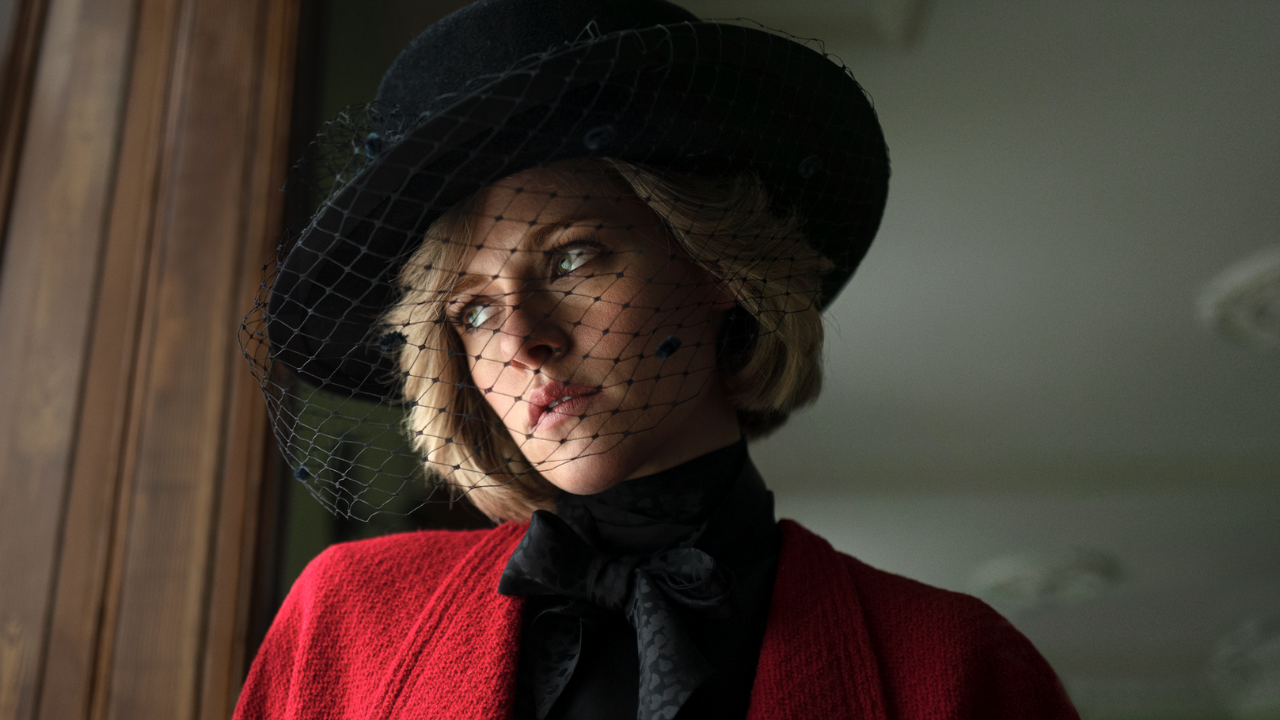 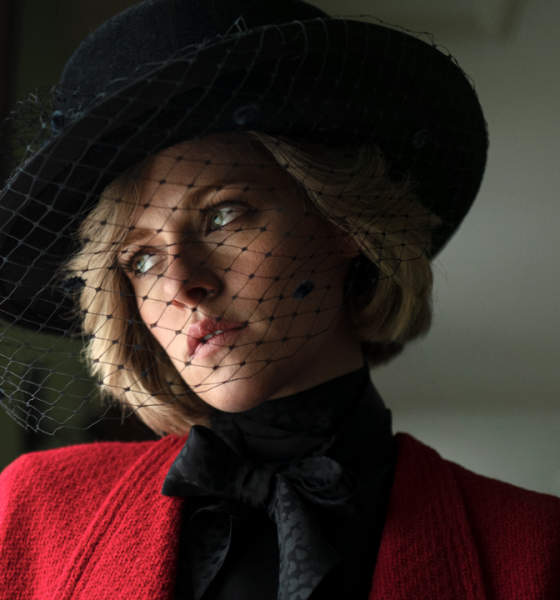 Kristen Stewart stands tall as Diana, Princess of Wales, in an attractive but light soufflé of a film.

This portrayal of the former Lady Diana Spencer, now Diana Princess of Wales, future queen, as a vulnerable, lost, emotionally fragile woman, psychologically disintegrating within the protocol laden institution of monarchy, is unapologetic in its intent. It is billed as a ‘fable based on a true tragedy’, Spencer, like its subject, is stylish, aesthetically pleasing, compelling, sadly brittle, and likely to be loved by the public. The film doesn’t just want to tug at your heartstrings; it wants to wrench them out of your body, swing them around your head ten times and use them to hang the men in grey suits that form part of ‘they’, the shadowy powers that be.

This is a The Crown style, republican script on steroids. Spencer is Diana’s one-woman show of despair, and the supporting cast of silent royals are little more than props for it. Not only do the actors playing members of the royal family look nothing like the real Royals, but they mostly also don’t get any lines or the dignity of individual personalities. They are largely presented as a monolithic regal wall of rules and disapproval for the flaky star princess in their midst.

There is a half-hearted attempt towards the end to humanise Prince Charles (Jack Farthing) a tiny bit, but it’s too late and feels like an afterthought. He is pretty much cast in stone in filmland as the aloof and unsympathetic husband who betrayed his young bride. The Queen (Stella Gonet) gets a couple of lines, tersely observing that having your likeness on a £10 note is about as good as it gets, ‘You’re currency, nothing more’. But overall, there is no attempt to present Diana’s situation as a complex, multi-layered story within which many people suffered.

Spencer is, therefore, very much the Cliff notes version of the troubled marriage of the heir to the throne, Prince Charles and the aristocratic Diana Spencer.

The roles are simply cast; Diana – victim, the monarchy via the shadowy men in grey suits -oppressors. It is the black and white version of Princess Diana’s story’s failed fairytale as told in supermarket tabloids and even slyly in Oprah’s back garden. One lone woman versus ‘the system’. It’s not even them and us in this film. It’s ‘her’ and ‘they’.

The Queen? Prince Charles? The Royal family as a group? The courtiers? Unseen forces behind the scenes? The corgis?

We don’t know, and nor does Diana. And this vagueness is a failing in the film. Kristen Stewart has no adversary to bounce off. Her one scene with Charles has real emotional charge, but it’s brief. Most of the time, she is fighting herself, screaming into the thin, suffocating, dark air that envelopes her. It makes her unravelling curiously unaffecting at times. Her desire to escape back to her boarded-up childhood home is also less moving if you know Diana’s true story; that many of her adult problems may have had their roots in her childhood life. But Spencer is not a biopic and has no interest in historical accuracy. It’s the idea of Diana as the character at the centre of a grim fairytale.

The film takes place at Sandringham estate in Norfolk over three days at Christmas 1991. The opening scenes signpost the way the rest of the film will go. Diana, already nervy, is lost and alone in an open-top car. She has no security with her and is late to the festivities. She will break protocol by arriving after the Queen. She stops at a café to ask for directions. “I’m looking for somewhere”, she announces to no one in particular, “I have absolutely no idea where I am”.

The owner and customers are openmouthed. This is the most famous and photographed woman in the world in their modest establishment.

While Diana flounders around narrow country lanes in her small car,  at Sandringham, everything is running precisely and flawlessly, like a military operation. Meticulous preparations for Christmas are underway ‘downstairs’ in the kitchens where Sean Harris presides over his staff like a sergeant major. Steel trunks of seafood and vegetables on layers of ice are delivered. Outside, the ice on the perfect lawns give a clue to how life might be like on the estate. There is little subtlety in the imagery throughout the film. It repetitively conveys the message that Diana, the free spirit, is trapped in all this cold rigidity.

We learn about the peculiar rules of a royal Christmas from Diana as she goes about being exasperated by them. She spends much time explaining to those around her what Royal life is like. She adds history to the lesson from time to time as well, notably the fate of Anne Boleyn, the second wife of Henry VIII. He had her beheaded when he needed to get her out of the way to make way for wife number three of six. A book about her life and death has been left, purposefully, on Diana’s bedside table. Perhaps the two royal wives have something in common?

Taking care of Diana’s outfits is a criminally underused Sally Hawkins as Maggie. Her job as dresser is to ensure that Diana wears each carefully labelled outfit for the right occasion over the three days. Save for one unexpected scene towards the end; she is largely reduced to spouting platitudes to Diana to gee her up. Diana, of course, rebels.

Diana likes Maggie and confides in her that the string of pearls Charles has bought her are the same as the ones he has bought his mistress. The latter is studiously not named in the film and referred to only as her. The pearls represent the stifling stranglehold royal life has on Diana, the betrayal of Charles, the figurative noose around her neck of the press and the world wanting a piece of her.

They feature heavily in several pivotal and exquisite scenes, notably one with soup which is especially gorgeously and brutally done.

Food, generally, plays a big part in the film as it links to Diana’s eating disorders, notably bulimia. Clothes too are plentiful, befitting Diana’s global status as a fashion icon. Some of her best-known fashion styles are used in a heady balletic montage showcasing the different Dianas that existed over the years. It’s one of the many scenes on which Larrain plants his aesthetic flair.

Unfortunately, the narrow window of the film’s time period means that Stewart is not able to explore these different sides of the princess. The three days covered are a crisis point for Diana. So, she is constantly jumpy, emotionally flailing like a drowning butterfly or plain petulant. Again, some balance of emotions would have been a welcome respite.

And so to Kristen Stewart’s performance. She was a controversial choice for the role. Small and waif-like, would she be able to play the tall, statuesque Diana? Her most famous role, to date, Bella in the Twilight series, was famously clumsy. Would she be able to manage the Regal poise of a princess? Would she get the accent right?

The answer is yes, yes, yes and yes.

She acquits herself extremely well in all departments. She’s harnessed the accent and posh, Sloane Ranger inflexion, stands tall in the outfits and even offers up the peaches and cream glow of Diana’s complexion. Her delicate features capture the fragility of Diana beneath the public persona, and she embodies the slow internal breakdown to the point where you forget you’re watching Kristen Stewart playing Diana.

But the power of her performance doesn’t lie in these outward traits. At the start of the film, she doesn’t immediately look the part, but that doesn’t matter by the end of it. She has created a Diana who breathes real air. She is not Kristen Stewart trying to impersonate a real-life figure, and she is an actress building a real woman from the millions of snippets of information she has been given. It’s a creation reminiscent of Michael Fassbender as Steve Jobs. Fassbender looked nothing like the Microsoft founder but was so compelling in his creation of the man that it was hard to imagine anyone else playing him by the time the film finished. Stewart captivates the attention in a similar way, her awkward, fidgety mannerisms an outward sign of the conflicts and frailties raging within.

One wonders what she might have been able to do with a full-blown biopic. Would it have gained her an Oscar to go with her Caesar? Will this film be enough to get her it?

I foresee numerous nominations for her. The film is likely to be pushed hard during awards season. Lead actress and director, of course, but also production design, a resplendent effort by Guy Hendrix Dyas, to recreate Sandringham with its paintings and rich upholstery, long, cold corridors and manicured gardens. Jonny Greenwood’s score, which deftly accompanies Diana’s emotions on their torturous journey, is also a likely favourite for nominations.

Spencer works well as a fable loosely based on a story we think we know. But a fable has a moral. It’s not clear what the moral of this story ultimately is. Be careful what you wish for because you just might get it? As this film suggests, Princess Diana was not just a middle-class girl more at home at KFC who was forced into a marriage and role that went sour. She was a true aristocrat from an old established bloodline. Her older sister dated Prince Charles before her. So she knew something of this life before she entered it. Diana chose, however misguidedly, to be a princess. The world wanted her to be a happy one, and she ultimately wasn’t for many reasons. According to the Queen (the real one) in her tribute to Diana, after her death, “In good times and bad, she (Diana) never lost her capacity to smile and laugh, nor to inspire others with her warmth and kindness.”

It would have been nice to see something of this Diana too.