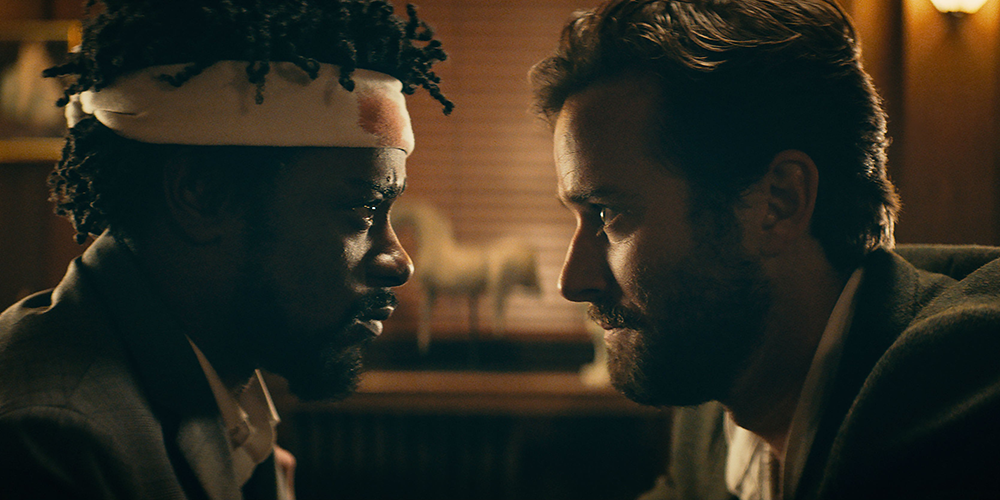 Every now and again we’re treated to a movie that strives to say something genuinely profound about ourselves as a culture, a biting and razor-sharp comedic statement that prods at our societal bubble and dares to laugh hysterically in our faces. Think back to last year’s tremendous Get Out, or, if you want to go back even further, something like Fincher’s adaptation of Fight Club nearly two decades ago now. Now finally getting its long-overdue UK release, Sorry to Bother You is one such entry in this canon, and, boy, does it lay its hammer down hard.

The feature directorial debut of rapper and activist Boots Riley, Sorry to Bother You presents itself as equal parts Spike – part Spike Jonze, part Spike Lee, part Spike TV – and follows Get Out’s Lakeith Stanfield as a struggling everyman telemarketing worked whose career blasts off into the stratosphere following the discovery of his own “white voice”, provided in hilariously OTT dubbed-form by comedian David Cross. Everything goes a bit bonkers from there, but to say even a touch more after that much of the concept would be to ruin the fun – suffice to say, it’s one of the year’s bonafide must-sees, and it’s a tremendous rallying cry for Riley.

Stanfield seizes the opportunity with absolute gusto, his pairing with Tessa Thompson here feeling like the coming together of two of the most interesting talents in the game today. Like everyone else to be found in this startlingly well-stacked cast, their performances are laser-engraved with the recipe to sell Riley’s distinct tone and wonderfully skewed sense of comedic activism. Armie Hammer continues his out-of-left-field assault on his own stuffy image, Danny Glover surprises by embracing his inner badass, and there are a veritable whos who of impressive names not even granted an on-screen presence, but, again, spoilers.

As absurdist comedies of the twenty-first century go, meanwhile, Sorry to Bother You is impressively and broadly accessible. It offers intriguing statements on class structure and – though not as harshly as you’d expect – the racial component therein, it teases – though doesn’t overtly indulge – a treatise on Trump’s America, and it takes more than a few very precise shots at the manner in which we, as a culture, will misinterpret what is and isn’t progress as we allow ourselves to become more and more satiated by our own darker nature. All of which is folded into a dark comedy and never once ceases to be anything less than shatteringly funny.

Riley, unflinchingly true to his own vision, manages to be both a grower and a shower behind the camera too. His script certainly contains the goods, but his uniquely stylised direction and sense of visual whimsy absolutely deliver them. Replete with a one-of-a-kind musical throughline, courtesy of The Coup and tUnE-yArDs, Sorry to Bother You makes good on offering up both surface and subtextual delights for anyone looking for a new and impressive cinematic voice. There’s an element of acclimation for those who like their comedies a little more straight-forward – Sorry to Bother You can, at times, remind you of the otherwise forgotten Bruce Willis adaptation of Vonnegut’s Breakfast of Champions – but those who give themselves to Boots’ vision here will find the rewards immeasurably worth it.