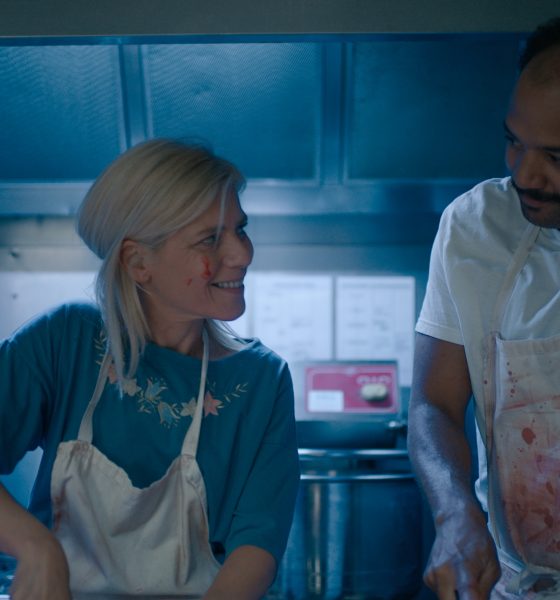 French cuisine is often heralded as some of the best in the world. Their culinary minds are able to turn the humblest of ingredients into gastronomic delights. Recently French filmmakers have found audiences appetites receptive to a sub-genre of horror. Cannibalism. Julie Ducournau’s Raw used it as a coming-of-age parable where a vegetarian went through an awakening and developed a taste for human flesh. However, in the dark comedy, Some Like It Rare, vegetarians and vegans are the ones on the menu!

Sophie and Vincent’s small butcher shop is on the brink of bankruptcy, and their marriage is falling apart. Their lives are turned upside down when Vincent accidentally kills a vegan activist who vandalised their shop. Overwhelmed and terrified of being accused of murder, their only solution is to get rid of the body. However, when Sophie accidentally sells part of their victim to a customer, the tender meat is a sensation. Realising that this could be the solution to their troubles, the hunt begins for fresh supplies!

Vegans are often the butt of the joke; however, the comedy here is far from offal. The tongue is firmly in cheek (before being removed and sold), as evidenced by a fun montage where the killings are juxtaposed against nature documentaries with the butchers as the predators and vegans the prey. In fact, being targeted for their lifestyle choices could be seen as a compliment. Due to the fact they do not ingest meat, ironically, they taste better when turned into it. As black as black pudding, it has the same twisted sense of humour as The League Of Gentlemen’s similar subplot about “the special stuff” on sale at Hillary Briss’s butcher shop.

Audiences will be laughing one minute and gasping in shock the next. Like the perfect sausage recipe, writer, director and star Fabrice Éboué blends comedy, violence and horror seasoned with a bittersweet romance at the film’s heart.

People do crazy things for love. That would include committing murder. Whilst the success of the business and the thrill of the hunt reignite the spark between the married couple, it is not long before their ambitions begin to diverge.

At first, the two seem to be following a path similar to that of Walter White in Breaking Bad. They become involved in illegal acts in order to secure their family’s financial survival. Yet the further down the rabbit hole they go, the further from redemption they get. Sophie, a fan of true crime documentaries and serial killers, embraces the role and goes full Heisenberg, whereas Vincent doesn’t have quite the same appetite for it. Éboué instils in him enough charm that, in a twisted way, one almost wants him to get away with it.

The film offers food for thought with views on veganism, activism, food sustainability, and supporting local businesses. Lots to chew on, but it works best when it leans into the Sweeney Todd narrative.

This black comedy won’t be to everyone’s taste. The juxtaposition between belly laughs and human pork belly will be hard for some to stomach but for those willing to challenge their taste buds, Some Like It Rare is far from chopped liver.