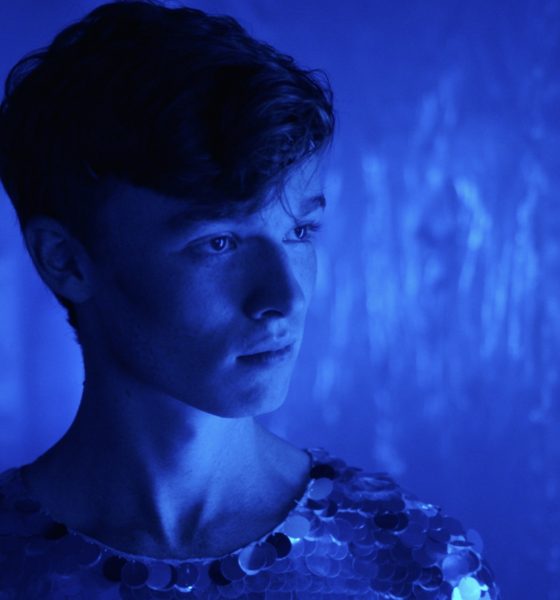 Samuel Van Grinsven must have been awfully tired of the cutesy pop powerhouse soundtracks and cheddar cheese dialogue that are peppered throughout a whole host of heteronormative coming-of-age genre offerings.

For us who identify as LGBTQIA+, the journey to discovering ourselves sexually and romantically isn’t always as clear-cut as it is for the straights. Our roadmap can be treacherous in a sophisticated climate well built for immediacy and anonymity, potentially dropping us in uncompromising scenarios. Rocking a shimmering garment that makes you think of Olly Alexander in Years and Years music video for Meteorite. Time to delve headfirst into this lustful world through the eyes of Conor Leach’s titular character…

Beginning with a seductive recital of a striking overtly queer comic to a blank screen, Sequin is actively carving out his own education away from the tedium of an English class. Visually presented like a ‘choose your character’ page on a Playstation beat ’em up, he furiously scrolls daily through the taut torsos on display on Anon, seeking out his next fix in spite of the curiosity found in fellow classmate Tommy (Simon Croker).

He’s consumed by the thrill of one-time deals with attractive men whose profiles are blocked once he’s had his fun, arriving home at ungodly hours to the deep concern of his dad (Jeremy Lindsay Taylor). In the clearest sign yet of his naive youth, such daring escapades land him an invite to the neon-lit confines of ‘The Blue Room’, populated with an array of male eye candy that operate within a no names, no conversation policy. Infatuated with a handsome stranger (Samuel Barrie) that he crosses paths and locks lips with, the excitement is short-lived as Sequin’s eyes are diverted alarmingly by a familiar face also in attendance. Only known as B (Ed Wightman), the icy blue aesthetic is a fitting companion for the cold closeted menace that he exudes, threatening to derail the best of Sequin’s intentions.

Undoubtedly a cautionary tale of the danger that is inevitably attached to gay hook-up culture, especially for a younger demographic. Yet director Grinsven here seems keen to dismantle the dominance of toxic masculinity that has far from evaded the queer community, with Sequin’s increasingly assured femme energy, further aided by the company of fierce drag queens pushing back against such unwelcome predatory behaviour. The throbbing electronica and Jay Grant’s alluring cinematography in its disarmingly dreamy sex party centrepiece serve to complement its leading man’s energy. Grinsven’s voyeuristic tendencies through the tight framing of peering through windows and doors heightening the explicit peril on display, slowly transitioning into a superior race-against-time erotic thriller, a subgenre that was raging back in the ’90s.

A first-timer, just like his director. Conor Leach is fearless in the role of Sequin, with the subtle shifts channelled predominantly through his body language, perfectly conveying how much emotional growth he still needs to have. The steely gaze and swagger of the opening frames in a library. His hands over his eyebrows peering into buildings, almost like half of a heart resembling his reluctance to commit to a man beyond a fleeting encounter. Ultimately paralysed into a panic-stricken frenzy as his focus becomes more erratic. It results in an awe-inspiring performance that will instantly resonate with a modern queer audience that is perhaps becoming allergic to such apps.

An intoxicating firecracker of a directorial debut. Sequin In A Blue Room is well worth ‘tapping’.

Related Topics:LGBTQIA+ReviewReviewsSamuel Van GrinsvenSequin In A Blue Room
Up Next