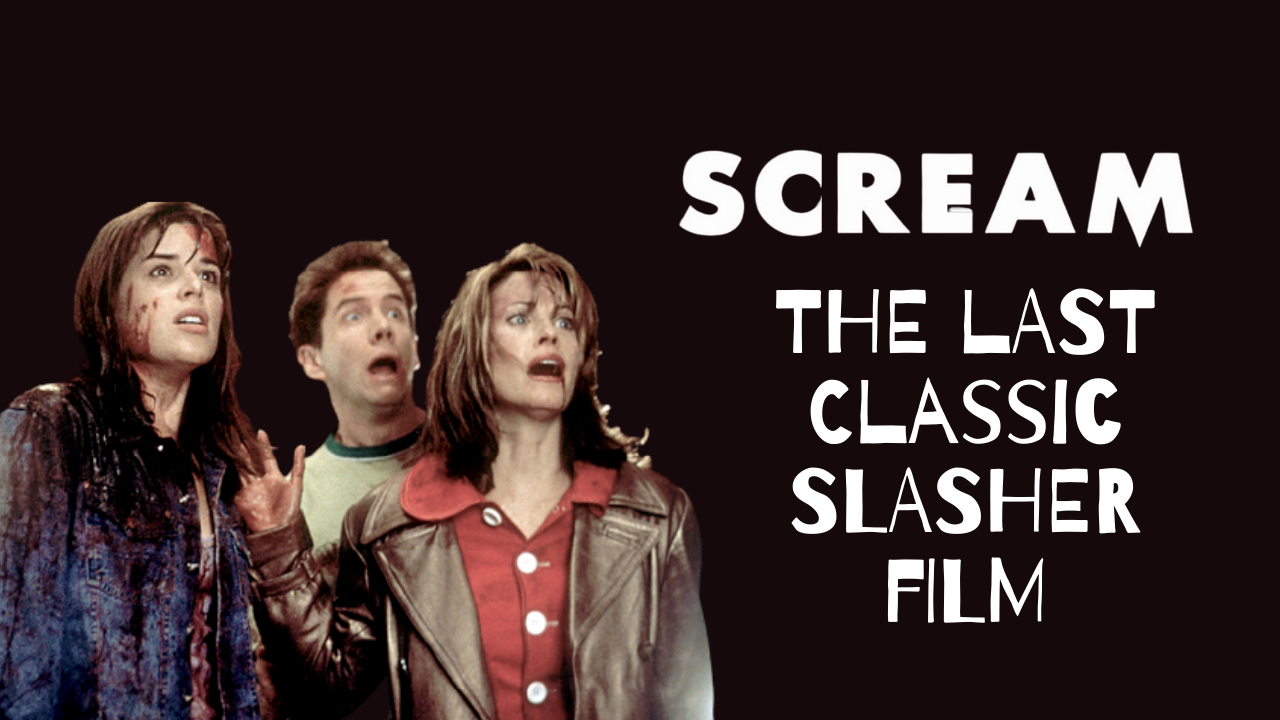 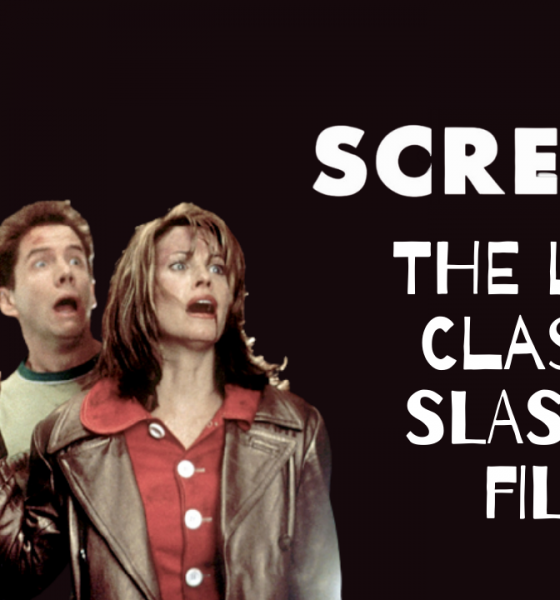 In 1996 the horror genre was on its knees with nowhere else to go. Slasher films had reached the bottom of the barrel, and all new ideas were dry and everything was rehashed. Enter a young screenwriter Kevin Williamson who would change all of that. Horror master Wes Craven was on the search for a new hit after Vampire in Brooklyn had flopped at the box-office. Once these two paths met movie magic was about to happen. The screenplay was rejected by many studios and producers had little faith, but Scream became a box-office smash. The success of Scream began an endless amount of new slasher films including I Know What You Did Last Summer, Urban Legend, Cherry Falls, heck even the Wayans Brothers Scary Movie. It all comes down to imitation becoming a form of flattery, but the question remains what makes Scream the last classic slasher film?

First of all, what is Scream all about? A peaceful town in California turns into a bloodbath when a masked killer haunts the town. Sidney Prescott (Neve Campbell), a young teenage girl, whose mother was killed a year before, becomes the target of the masked killer! Her boyfriend, Billy Loomis (Skeet Ulrich) becomes the main suspect along with Sidney’s father. Local Tabloid News Reporter Gail Weathers (Courtney Cox) and Woodsboro Deputy Dwight “Dewey” Riley (David Arquette) investigate and try to figure out who the killer is and if it’s the same person who killed Sid’s mom the year before!

Scream’s success lays in its open acknowledgement of horror films and pays homage while also satirising it. It lends the movie a level of self-awareness that had never been seen before in horror. We always see reference to classic horror in cinema such as the shower scenes (Hitchcock’s Psycho), long steady-cam shots through corridors (Kubrick’s The Shining) and maniacal dancing with the sunshine blistering in the background (Hooper’s The Texas Chainsaw Massacre). Scream’s very own director Wes Craven satirises this dressing up as his most iconic creation Freddie Kruger in the film, mopping the halls of Woodsboro High School as a janitor. Even our very own Billy Loomis is named after the famous Doctor from Halloween. Also, I might add how much he looked like Johnny Depp when he featured in Nightmare on Elm Street. It all interlinks and makes the audience aware of the rich history of horror and engages audiences to find these Easter eggs.

The over-riding sense of self-knowing and its sense of humour, Scream is the pinnacle of edge-of-your-seat entertainment. It’s a ludicrous premise that in theory, should not work. The film is still pretty damn scary in addition to being gruesomely bloody and gory. Even though all the characters are keenly aware of the facts of surviving horror movies, yet they still knowingly break the rules, that is established by the three godfathers of the genre – Nightmare on Elm Street, Halloween, and Friday the 13th. Scream once and for all establish the rules for surviving horror movies as famously told by Jamie Kennedy in the film:

The longevity of Scream is further encapsulated as a slasher classic by bringing back its core-trio every time. Let’s face it we all care about Sidney, Dewey and Gale. The prospect of them returning for each movie, just makes the franchise even more unique. We never really get to know the survivors that well, minus Jamie Lee Curtis’s Laurie Strode the original Final Girl from Halloween. Neve Campbell seemed to take over the mantel from Curtis in 1996 and brought her own take on the Final Girl. Interestingly David Arquette’s Dewey was meant to die in the original, but Craven decided he would survive the fatal stabbing. Dewey’s relationship with Gale Weathers is a significant element to franchise longevity. Audiences are always keen to know what stage of the relationship they are in each instalment. Every chapter of this story brings our trio closer and even more so when we revisit their pasts. There is a compelling charm and familiarity that makes our trio ever so memorable.

In the horror franchise, it is rare to see so many up and coming stars playing the lead roles. We always seem to get unknowns, but this famous trio were all at the brink of greatness during this period. Without Drew Barrymore’s inclusion, we would not have had Campbell, Cox, Arquette, Kennedy or McGowan. But Barrymore’s change from the lead to the first girl twisted the plot. The first 15 minutes is nothing but iconic, we all know the line “what’s your favourite scary movie?”. It’s pure adrenaline-pumping; we are set in the world immediately. Did I expect Barrymore to die straight away? Errmmm no! Just like Marion Crane (Janet Leigh) in Psycho, this broke the narrative of the tale. Paying homage to the genre Craven and Williamson created an iconic opening scene.

Finally, what makes Scream the last classic slasher, is Ghostface. This whole franchise has consisted of a different killer or killers in each film. The motives are all slightly different, but Sidney’s backstory drives everyone into madness.  The real twist comes from the first film with Billy and Stuart; narratively you never expect two killers, we are so used to having only one. Slashers always hide their true face; Jason has his hockey mask, Michael Myers has his William Shatner pimped out mask, and Freddy Kruger’s severely burnt face.

In Scream we see our killers living their day to day lives and are part of Sidney’s inner-circle. Billy is the boyfriend and one of our original suspects, but once he is stabbed, our opinions change. Little did we know Stuart, his best friend is the wingman behind these crimes. It’s a great mystery, and the motive of home wrecking is a pure surprise. The mask is so haunting and purely unforgettable. The Ghostface voice is disturbing and iconic, the simplicity of a knife and a basic Halloween costume intensifies the horror. Once the words “hello Sidney” hit, we all know things are about to get sinister. Even when I am home alone, I get scared of answering my phone.

Kevin Williamson and Wes Craven had a vision; they created a world where the slasher genre came alive again. A hybrid of satire, compelling character arcs and memorable slasher staples makes Scream as one of the finest horrors of all time. The iconography of the franchise is un-matchable and is an incredible piece of Americana. The formula sticks to the originals aesthetic but also rejuvenates the lore especially in Scream 4. More importantly, nobody has hit the high notes of the 1996 hit and thus makes it the last classic slasher film. In 2022 we will finally see the gang reunited for Scream 5. Wes Craven sadly passed away in 2015, but his legacy lives on with these characters, and the franchise is in the safe hands of Ready Or Not directors Matt Bettinelli-Olpin and Tyler Gillett.

This Halloween, why not drop down the lights, get some popcorn on and watch the last classic slasher film.