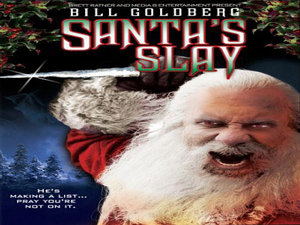 That jaunty old festive song has you all fooled, doesn’t it? The truth is, ‘Santa Claus coming to town’ may not be something you should be hoping for. I mean, what if it turned out that Santa was actually the son of Satan who, after losing a bet with an Angel, is forced to spread joy and happiness for a thousand agonizing years? And say all that was true, what would he do once those thousand years were up?

Well, that’s the kind of situation Santa’s Slay pontificates, bringing along Pro-wrestler and part-time giant Bill Goldberg to explain why a red suit and a white beard don’t necessarily mean ‘jolly’. With the help of a rocket powered sleigh and his bloodthirsty reindeer/bison hybrid, Goldberg delivers the gift of death to anybody in his way with a series of festively themed murders.

As Santa’s rampage continues through houses, strip clubs and police stations, itfalls to an old paranoid recluse (Robert Culp), and a pair of love struck teenagers(Douglas Smith and Emilie de Ravin – you know, the pregnant one from ‘Lost’),to save the day and kill Santa once and for all.

Let’s clear something up right away. Santa’s Slay won’t win any Oscars. It also isn’t necessarily the most polished film experience you’ll ever have. What it is, is exactly what it sets out to be – a daft, hilarious and raucous Christmas story for anybody who finds the whole festive season ‘a bit much’. Have you ever wanted to strangle someone with that wreath on their door? Then you need to watch this film.

I often get reprimanded for my enjoyment of awful films -After all, there’s nothing I like more than settling into Zombie Flesh Eaters 2 for an evening of light entertainment- but I also have no trouble identifying a genuinely entertaining film when I see one.

Whether it’s through the juxtaposition of Christmas tradition into a variety of sinister purposes (the survivors and non-survivors are listed as ‘naughty’ or ’nice’ in the credits roll, for example), or Goldberg hamming it up as a kill-happy, wisecracking St. Nick, Santa’s Slay never fails to provoke a smile.

I absolutely adore this film for it’s camp, overt silliness, and I absolutely recommend it for every one of you this holiday season. You might say, it’s the perfect stocking ‘killer’… … I’m so sorry.