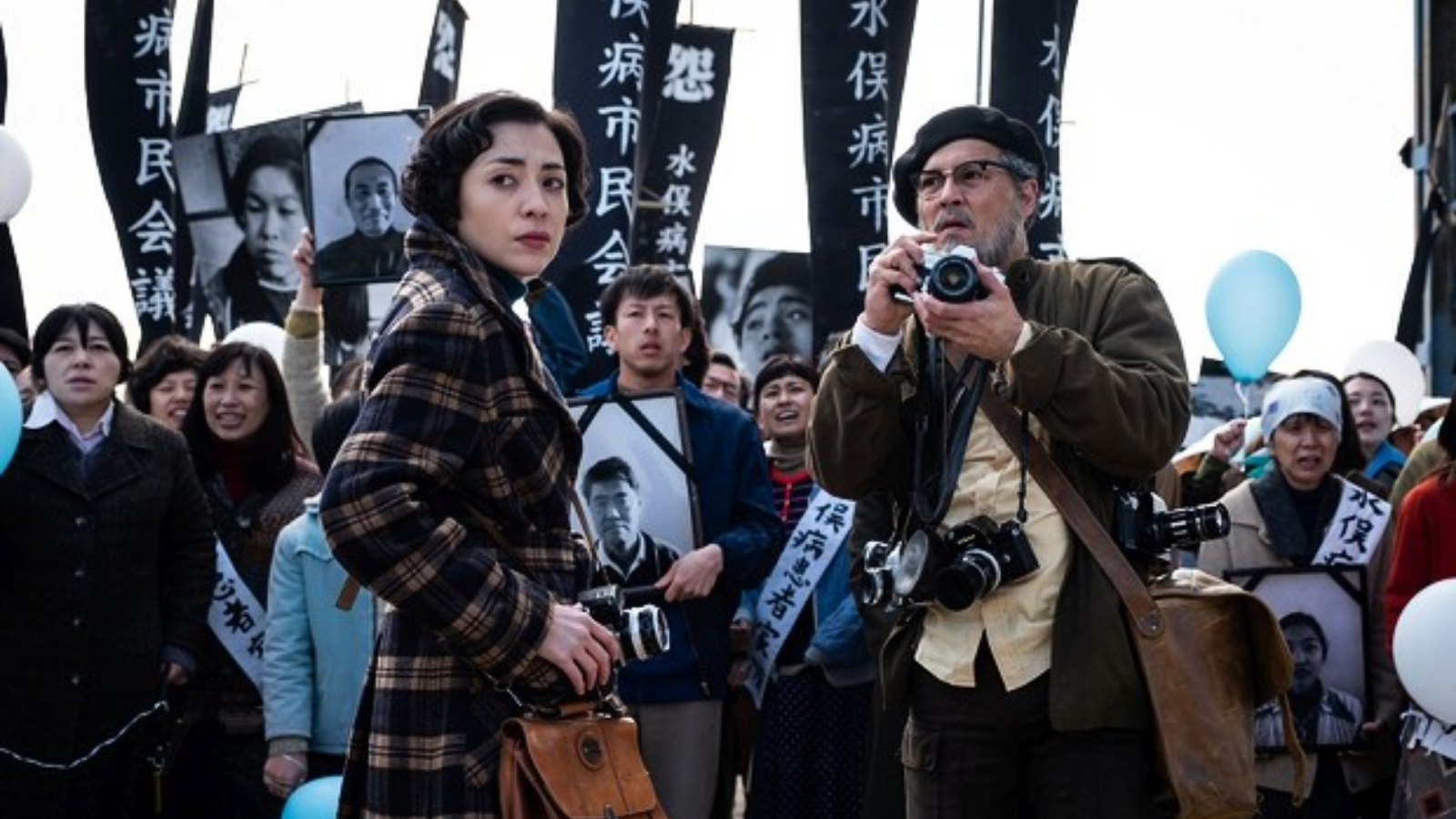 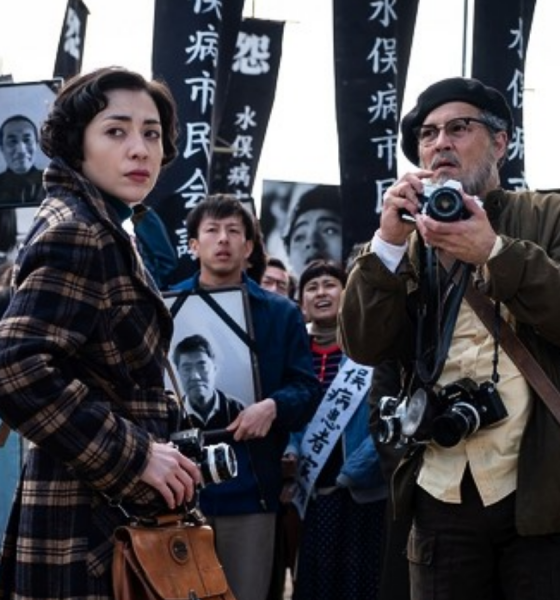 W. Eugene Smith, known to most as Gene and known by most for his fearless photojournalistic exploits, is widely regarded as one of the most – if not in fact the most – important photographers to have ever lived. American documentarian Ben Maddow suggested that Smith had produced ‘at least fifty images so powerful that they altered our perception of history’, and his Tomoko Uemura in Her Bath, taken in the disease-stricken Japanese city of Minamata in 1971, is inarguably one of the most haunting pieces of visual art and historic documentation we have. The photo, which depicts a mother cradling her extremely deformed daughter in a traditional Japanese bathhouse, is striking not only for its technical composition – the light casts mother and child in a ghostly pallor whilst the shadows encroach on them in a way that could be taken as Death grabbing at them or offering them reprieve from suffering – but also its empathy and humanity. It is not an inherently political photograph, but rather a shatteringly human one, and it is only due to Smith’s integrity and commitment to his duty that he can capture something so emotionally raw whilst, in a broader context, indicting the gross corporate negligence of the Chisso Corporation whose chemical plant caused the disease that would take Tomoko’s and 1,783 others’ lives.

In many ways, much of what makes Smith’s photograph of Tomoko Uemura and her mother so impactful is what works against director Andrew Levitas’ Minamata, a traditionally stylised issue picture that tries to function simultaneously as a character study of W. Eugene Smith in his late career, as an indictment of corporations who value profit over human life, and as a tribute to the power of photojournalism in exposing corruption and exacting justice. Smith’s photo endures for its combination of emotional sincerity and artistic presentation, its rawness devoid of any exploitative or manipulative subtext. Levitas’ film on the other hand, though competently formed, fails to thread the needle between artistry and empathy anywhere near as successfully.

In Minamata, Johnny Depp takes on the role of Gene Smith. When we meet him during an opening title sequence that pseudo-psychedelically plays out to Ten Years After’s ‘I’d Love to Change the World’, Gene cuts a dishevelled, almost decadent figure. In early scenes with his LIFE editor Bob Hayes (Bill Nighy), you can sense the photojournalist’s former greatness and his – as well as his boss’ – disappointment with how far from grace he has fallen. Bob acknowledges that Gene is the most important photographer LIFE magazine has ever had, and Depp – hidden behind a beard and moustache that can only semi-obscure his inherent star power – affects a demeanour that shows he knows it. When Hayes adds that Gene is also ‘the most impossible photographer LIFE magazine has ever had’… well, the truth of that lingers like alcohol on the breath of a man pleading sobriety.

What Gene needs at this point in his life is a cause, because the ghosts of what he saw as a wartime photographer during WWII haunt his dreams and seem to be what he drinks and anaesthetises himself against during his days. It’s worth noting that the glazed look in Depp’s eyes as Gene Smith rings with the kind of truth that occasionally pierces the characterisation of actors whose lives have become as publicly pored over as their work, and though it’s risky business to blur lines between art and artist, there’s a commendable self-effacement to Depp’s performance here that strips back the Captain Jack Sparrow bravado and Burtonian kookiness and reminds us why and how the one-time teen idol broke the teen idol mould. As I was saying though, Gene needs a cause, and that comes when Japanese-American Aileen (an excellent Minami Hinase) comes into his life and alerts him to a humanitarian crisis in her homeland that nobody seems interested in covering or challenging. Before we know it, Gene is barging in on one of Bob Hayes’ meetings demanding to be sent to Minamata – “There’s your Pulitzer” he nonchalantly declares, and even Hayes’ stubbornness relents in the face of a revitalised Smith. At the point Gene arrives in Minamata, which is captured alternatingly in haunting wide shots and lethargic tracking movements by the more-than-capable DP Benoît Delhomme, the film sets out its stall compellingly. And then, bit by bit, it starts to come undone. Delhomme’s camerawork betrays the urgency and harrowing authenticity of Smith’s own, so as Depp meets the locals and realises the devastating scale of the almost moustache-twirlingly villainously portrayed Chisso Corporation, shots which recreate Smith’s own incendiary work are aligned with Levitas’ own vision which pales in comparison. The usually dependable composing maestro Ryuichi Sakamoto (The Revenant, Proxima) offers orchestral swells and lamentive strings that feel disingenuous and – I hate to use the phrase – overly worthy. And, though the film hits some high points dramatically as Gene rallies the local community and calls them to arms in peaceful, purposeful protest against Chisso Corporation’s lies and gross negligence, too often we are tasked with scenes that play into unsavoury saviour tropes and outstay their narrative and experiential welcome. Case in point is a scene which sees Gene – in a display that uncomfortably calls to mind that viral video of celebrities singing Imagine from their mansion homes at the start of Lockdown – droningly sing Bob Dylan’s ‘Forever Young’ as he cradles a deformed villager. It’s exactly as uncomfortable to watch as that sounds.

Issue films like this can be gripping viewing experiences, as we saw with Todd Haynes’ eminently comparable Dark Waters, which made ingenious use of horror tropes and an almost jaundiced colour grading to tell the story of the DuPont chemical poisoning scandal. However, in the absence of an innovative approach or unique angle on the story being told, the fact that the closest Minamata comes to the kind of powerful experience Levitas aims for is when it essentially gives us W. Eugene Smith’s actual work suggests that this is a subject which may have been best covered as a documentarian visual essay.

Ultimately, even as Johnny Depp’s beguiling lead performance captivates and Levitas relates to us an incredibly important landmark in photojournalistic and activistic history, Minamata serves its subject best in ways it probably didn’t intend to – it reminds us just how unique Smith’s talent for balancing the pursuit of his art and his duty to the truth was by misjudging that balance almost completely. If nothing else though, hopefully this film will at least bring a modern audience awareness of Minamata disease, the effects of which are still keenly felt today, and will introduce a new generation to W. Eugene Smith’s brilliance.