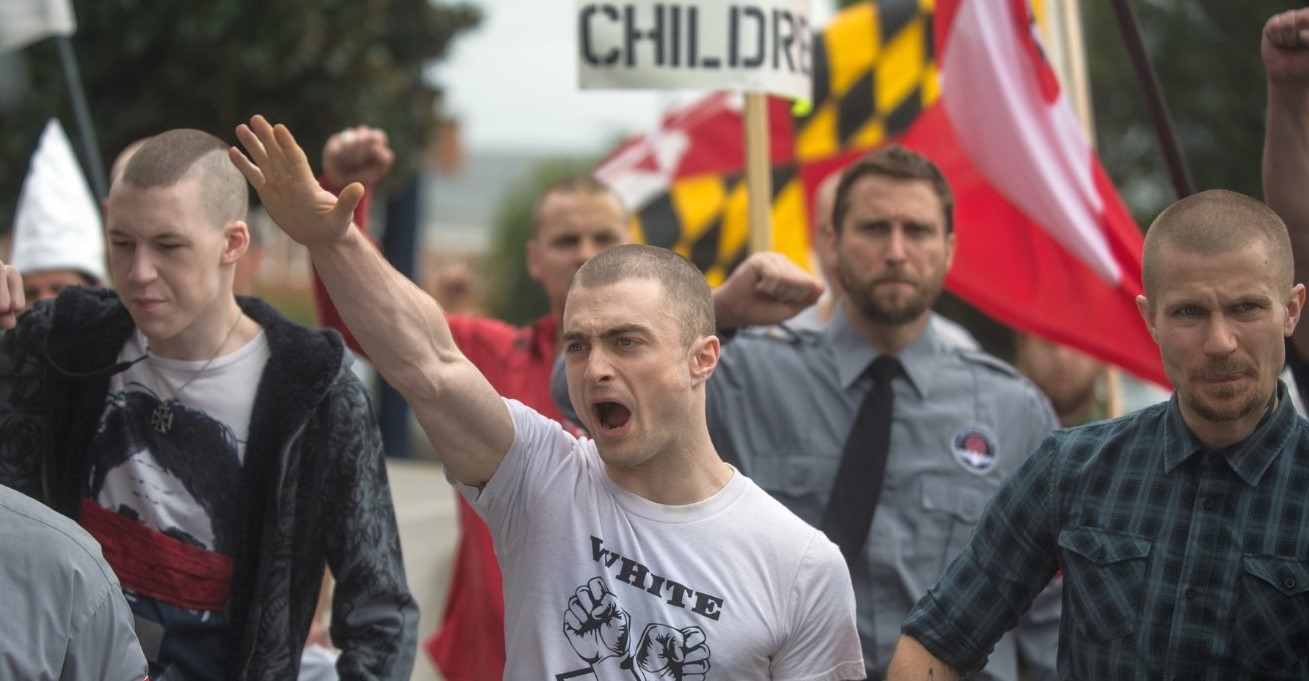 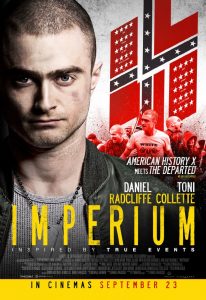 As he continues to pick roles miles away from a certain boy wizard, we can look forward to seeing Daniel Radcliffe as a farting corpse next week in Dan Kwan and Daniel Scheinert’s ‘Swiss Army Man’.  For now, though, he sports a buzz cut as an FBI agent infiltrating a nest of white supremacists in ‘Imperium’.

After a previous mission goes disappointingly wrong, idealistic FBI operative Nate Thomas (Radcliffe) is persuaded by senior agent Zamporo (Toni Collette) to go under cover.  The target is a network of white supremacists suspected of being behind a plot to build a dirty bomb.  But that’s not his only challenge: preserving his own personality and beliefs becomes increasingly difficult as he gets deeper within the neo-Nazi underworld and its insidious culture.

It’s a powerful subject for a first feature, so director Daniel Ragussius deserves respect for taking it on.  And it appears he’s in luck with the film’s release dates, in the light of the US presidential election and much-discussed shifts in attitudes in post-referendum UK. It makes the film look like it has its finger on the pulse.  So it’s all the more disappointing that the result is so routine.

Under cover work is a big ask for any agent, but for somebody who’s rather damp behind the ears and completely aware of his limitations, it’s terrifying.  All of which gives Ragussius even more to play with, putting the most unlikely of infiltrators right into the heart of the hornet’s nest.  Radcliffe’s physical appearance in the film has been well-publicised, a radical departure from his usual image, but he’s still dwarfed by the hulks around him, all braces, boots, bald heads and, frequently, bushy beards.  Yet, despite that and the observation that he’s “pretty mature for a skinhead”, he still manages to convince them he’s for real.

His cover is tested, of course, and there are chinks in his armour, some of them strangely overlooked by the group.  Like being called Nathan.  But his knack for quick thinking means he can talk himself out of sticky situations and make the supremacists look stupid into the bargain.  Family man Gerry (Sam Trammell), on the other hand, is a completely different proposition, a quietly spoken professional with the mandatory wife and two children.  Not at all the usual image of a white supremacist.

There times when it looks like his cover’s going to be blown so we’re geared up for something sweatily tense.  It doesn’t happen.  Somewhere along the line, the script was doused in freezing cold water, because any suspense is strangely absent.  It’s not the fault of Radcliffe or, indeed, any of the cast, who do what they can with what they’re given.  It’s all to do with the direction and the screenplay, which gives us something slack and disappointing.  You feel uncomfortable at the attitudes and language on display, but that’s all you feel.

Radcliffe, although not at his best, is still credible in the role.  Toni Collette, who is a terrific actress, isn’t given much of a chance to be other than tough and gum chewing.  The supporting characters are more rewarding: Chris Sullivan as an intimidating skinhead and Tracy Letts as the man with all the plausible words but whose face betrays pure hate.  Most impressive of all is Trammell, the personification of the banality of evil and ironically the most educated of them all.

‘Imperium’ promises much in terms of suspense, but delivers very little on that front.  The overall feeling you have at the end is decidedly flat.

Bring on the farting corpse.

The Lovers And The Despot

The Girl With All The Gifts