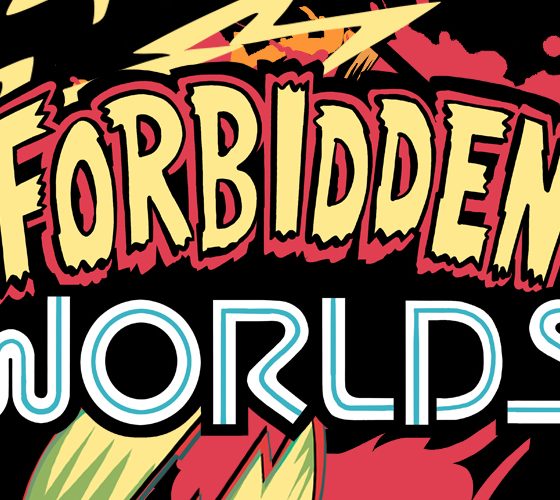 CHECK OUT THE FESTIVAL SCHEDULE

In 1982, Bristol’s beloved video shop, 20th Century Flicks, opened its doors for the first time. Over the past forty years, it has survived the transitions from VHS to DVD to streaming, and remained a key fixture in the city’s cultural landscape. To this day, you can still rent out discs and tapes, or hire one of its two private cinemas.

Also in 1982, film fans were treated to a huge number of genre classics on the big screen – and so we hit upon an idea…

To celebrate 20th Century Flicks turning 40, a new film festival will come to Bristol in May. Forbidden Worlds will be a three-day event, dedicated to genre cinema with a particular focus on some of the classics and curios that emerged in 1982.

Hosting the event is the former Bristol IMAX, situated in Bristol Aquarium. Originally opened in 2000, this venue has tiered seating for 340 persons and is site to an impressive 19m x 15m screen – truly a big screen experience!

While the full festival line-up will be revealed at a later date, we can already confirm screenings of Ridley Scott’s science-fiction classic Blade Runner; Australian post-apocalyptic masterpiece Mad Max 2 (the perfect opportunity to watch on the big screen and see how it compares to Fury Road); Steven Spielberg and Tobe Hooper’s supernatural chiller Poltergeist; Basket Case, the film that may have influenced Malignant; Roger Corman’s gleefully gory Alien rip-off Forbidden World; John Frankenheimer’s criminally underseen martial arts movie The Challenge, starring Scott Glenn and Japanese acting titan Toshiro Mifune; bizarre Taiwanese fantasy adventure Thrilling Bloody Sword that plays out like the weird love child of Snow White and the Seven Dwarfs and Masters of the Universe; plus two children’s faves from 1982, The Dark Crystal and The Secret of NIMH.

Additionally, we will also be showing Hammer’s Dracula A.D. 1972 to mark the 100th anniversary of Christopher Lee’s birth.

All films will be projected from DCPs (Digital Cinema Packages) on a professionally installed Christie digital cinema projector. Please note these screenings will not fill the full size of the former Bristol IMAX screen. However, viewers are advised that the projected image size will still be very big!

David Taylor, co-owner of 20th Century Flicks says: “To celebrate the unlikely event of our 40th birthday we wanted to do something special, so we are hosting a film festival for the whole city as a way to say thanks! Bristol has such a vibrant film-loving community and it’s hard to imagine a shop like ours surviving this long anywhere else.

“Forbidden Worlds will complement the many film festivals that already operate in this city such as Slapstick and Cinema Rediscovered, tapping into the more disreputable type of cinema that video shops made such fertile territory of back in the early days. If the festival is successful, we hope to make this an annual event with a different theme and line-up each year. It’d be quite something if a video shop’s birthday party could bring the largest cinema in the south-west back into use for the city!”

Marketing manager Tessa Williams said, “For years, I’ve wanted a genre film festival to be held in the South West, but with this celebration of 20th Century Flicks, the stars have finally aligned and we can’t wait to unleash some classic and crazy genre films on the biggest screen in the city!”

For the full line-up and more information, visit www.forbiddenworldsfilmfestival.co.uk for festival and day passes or tickets for individual screenings.

Winners Announced at the 2022 BAFTAs