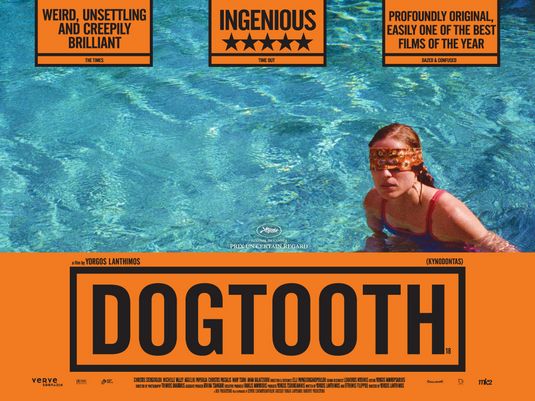 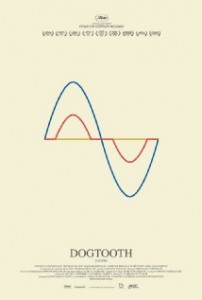 “Soon your mother will give birth to two children and a dog.”

If Austrian auteur Michael Haneke went to Greece to make a film, it could have looked and felt like Dogtooth. This is high praise indeed for director Giorgos Lanthimos, who also co-wrote this shocking piece of family drama.

Winning the Un Certain Regard award at Cannes and securing a rare Oscar nomination for Best Foreign Film for Greece, Dogtooth takes the social-capitalist satire to the extreme, and as a result, becomes one of the boldest and most controversial films to emerge from Europe in recent years.

Lanthimos has been accused of plagiarizing Castle of Purity (1973), an unheard of Mexican film with a similar plot outline, of which he strongly denies. Look past their seeming similarities, and you get a fascinating film that will challenge your conception of cinema as an art for, and of, expression.

The story revolves around a family who lives in a big house on an isolated land. The children, two girls and a boy in their early twenties, have never left their home. They are nurtured by their parents to think, speak and act differently from other human beings.

By staging most of the drama in the house, except for a few occasions when the father drives out to work at a factory, get groceries, or brings back a woman to satisfy his son’s sexual urges, we feel the claustrophobia of being stuck in a place and being dictated by a violent and perverted parent.

The girls are forced to commit incest on their brother; they are all made to bark like dogs, supposedly to ward off cats; yet they all seem to lead a normal life, or what they have been led to believe is normal. Dogtooth is an intellectually perverse film at some level, and will repulse viewers who are not ready to be psychologically challenged.

As far as Lathimos is concerned, Dogtooth should be seen as a satire – a somewhat deviant case of choosing nurture over nature. Protection through intimidation is a central theme, as evident in a scene where the father describes to his children the unspeakable horrors a cat, a man-eating creature of the outside world, could inflict on a human being.

In a strange way, the film is like a thematic marriage between Shyamalan’s The Village (2004) and Haneke’s Funny Games (1997), alluding to the idea that the oppressor can wield control over the narratives of the oppressed.

Dogtooth can be frustrating to watch. It follows a clean, clinical visual style that can prove alienating. Characters are sometimes framed out of the picture (we don’t see their heads), even in scenes of dialogue. The shots are also very methodically edited, without much emphasis on emotions.

As a result, the entire film gives us a cold, calculating view of human behavior, and by extension, the vulnerability of the human condition. It also functions as one of the most horrifying arthouse films in years, best described by Michelle Orange of Movieline as “a brightly lit nightmare of patriarchy run amok”.

Verdict: This Greek film is frustrating yet fascinating to watch, masquerading as a dark satirical drama that cranks up the horrifying factor to a solid ten.