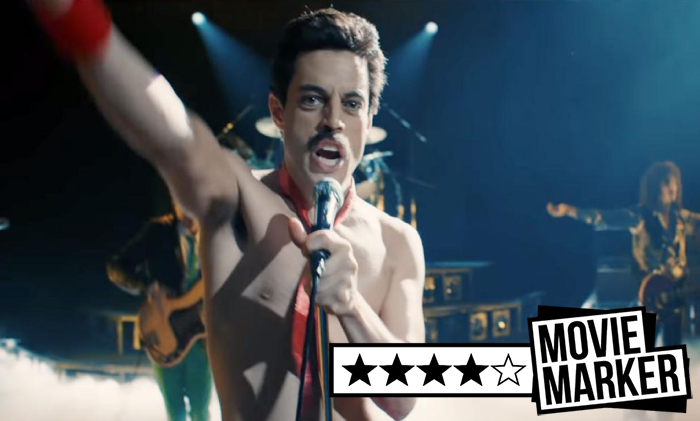 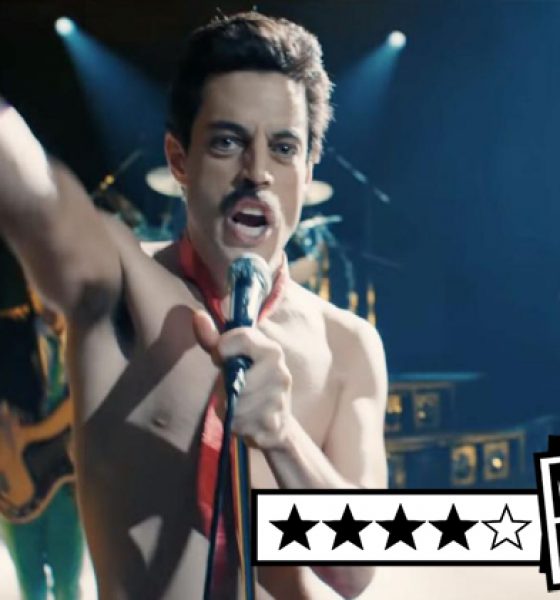 A band with a willingness to incorporate unlikely genre influences into their stadium-sized anthems. Anchored by a front man, whose phenomenal stage presence and distinctive voice laid waste to the cliches, setting him on the path to become both gay icon and rock legend.

Such assurance on stage and yet bringing the story of Queen to the big screen, has been a protracted case of ‘Another One Bites The Dust’. Neither Sacha Baron Cohen who is renowned for grand transformations, along with the main man at Q Branch Ben Whishaw quite hit the right notes. Even in the final product, controversy struck as Dexter Fletcher who seems to be on a one-man mission to direct every musical biopic going (Sunshine On Leith/the upcoming Rocketman), replaced Bryan Singer at the business end of production.

However. Within seconds of becoming acquainted with Rami Malek’s portrayal of Freddie in this rousing biopic, any pre-release fears mostly dissipate with the opening frames plunging us deep into the band’s modest 1970’s beginnings, Mercury’s vigour and verve soon winning over the talented trio of Brian May (Gwilym Lee), Roger Taylor (Ben Hardy) and John Deacon (Joseph Mazzello).

Despite much ridicule and opposition from record executives, lamenting their refusal to conform to a ‘three-minute’ song structure complete with catchy hooks. Their success is swift and their admirers many, particularly for Freddie with the unwavering support of Lucy Boynton’s Mary Austin clashing with growing influence and manager Paul Prenter (Allen Leech), as Mercury looks to openly embrace his sexuality whilst widening the band’s creative vision.

The handling of Freddie’s bisexuality and his AIDS diagnosis was a fierce talking point beforehand, with fellow fans fearing a complete erasure of his proud outrageous lifestyle and intense relationships. Inevitably with the 12A rating and the band’s mass appeal, it isn’t outwardly explicit in its representation with a striking leather bar sequence and Freddie cruising another man at a gas station toilet prime examples, merely hinting at the debauchery he was comfortable with.

Yet it doesn’t completely shy away from addressing it. The sensitive handling of Freddie’s ‘coming out’ to Mary and depicting Freddie as a figure who refused great sympathy in the wake of such tragic news, far from lacking in their poignancy. For those wanting a more no-holds barred insight into the singer. You can’t help but wonder if he was still alive whether the film, whilst effective would have pushed that boundary further.

One thing’s for certain, the sheer power of their music punches through the screen more forcefully than a late 3-D blockbuster conversion. Each dynamic musical number thrillingly executed through its impeccable costume and sound design, none more so than the triumphant Live Aid segment at Wembley Stadium which reinvigorated the four-piece, an immersive and show-stopping finale that may just leave you giddy with delight.

The banter between the band may be workmanlike but it’s hard to deny the cameraderie between Gwilym Lee, Ben Hardy, Joseph Mazzello and Rami Malek, doing their utmost to be as authentic as possible in their portrayals, largely succeeding in the process. Inevitably it is Malek’s Mercury though, that runs this show. Emotionally engaging in his quieter moments as he looks to stave off loneliness and negative influences. Truly riveting as he struts around and commands his audience, proving to be a true lip-sync assassin. It is a mesmeric performance from the Mr Robot star.

You can keep your gunpowder, gelatine and dynamite with a laser beam at home. ‘Bohemian Rhapsody’ is indeed. Killer Queen.