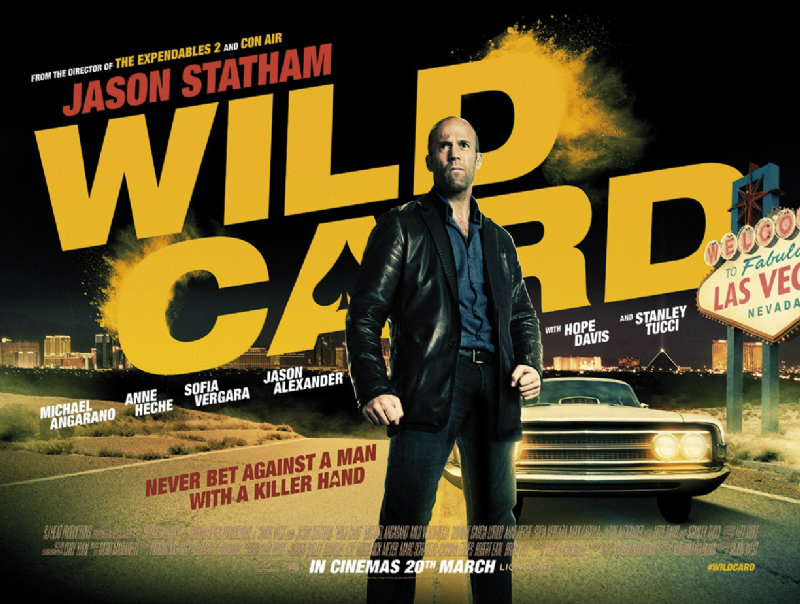 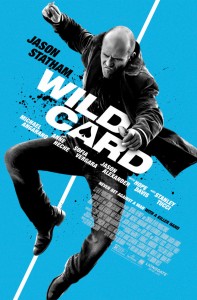 Wild Card starts off by quickly setting up two intriguing predicaments. One is to show what our main character, Nick Wild (Jason Statham), does for a living while the other is an unspecified woman being dropped off, beaten and battered, at the emergency room. There is no need to understand how the two scenarios might connect as the movie isn’t intent on making a major mystery of anything, but rather Wild Cardis more intent on simply hooking you in hopes that you might stick around to see what scenario the next Statham caricature might be forced to use his martial arts skills to take care of. Giving credit where credit is due, the hook is nicely placed and I’m a fan of Statham so I was willing to go along with what could of course never rise to become more than a mediocre action flick. That is simply what we expect from Statham in his solo outings, but somehow he always manages to bring something more to the table than we ever expect. Whether it be the tone and setting of Homefront, the large amount of sympathy and goodwill contained in his character from Safe, the twists of War, the time period and fellow actors in Killer Elite or even the gritty, grimy style of something like The Mechanic-there is always an aspect of these Statham films that allow them become more than what we bargained for which was a direct to video movie so trashy and standard it is instantly forgettable. Instead, Statham operates on the principles of intriguing character pieces despite him being pegged as playing the same guy over and over again. This is partially true as each of the characters the action star portrays resembles one another in some form or fashion, but their circumstances always paint a different picture and it is this information that informs the state of mind of the character that allows Statham leniency from his British accent and bad boy facade. In Wild Card he is again a kind of bodyguard, but he is a man with an addiction and one that doesn’t derive from drugs or alcohol, but that of one he could make a clean break from if he so chose. It’s the choices that make Statham’s characters different and if anything new comes to light in this otherwise generic film it is why Statham is equally as heralded as he is crapped upon.

In short, Statham’s Wild is a Las Vegas bodyguard with lethal professional skills and a personal gambling problem. The long form of the story though includes Holly (Dominik García-Lorido) the aforementioned beaten and battered woman who comes to Nick seeking his help to exact revenge on the guys who left her for dead outside of the emergency room. There is also Cyrus Kinnick (Michael Angarano) a self-made millionaire who arrives at Nick’s office that he shares with Pinky (Jason Alexander) looking specifically for Nick to show him around Vegas and provide him protection while he gambles. The meat of the story centers on Holly’s task of finding out who the guys are that raped and beat her while getting Nick to commit to helping her. He is hesitant, but unable to resist the urge to set things right. Nick discovers the man responsible for raping Holly is a local gangster known as Danny DeMarco (Milo Ventimiglia). Naturally, Nick pays DeMarco and his two lackies a visit, but after trying to speak with DeMarco peacefully the spoiled gangster resorts to calling for his men to treat Nick the same way they did Holly. Things get crazy and it’s officially time to see Statham kick some ass. Nick quickly dismantles the two witless henchman and DeMarco himself, restraining them and inviting Holly into the room to do as she pleases. If you’ve seen the trailer you know where things could possibly go from here, but I don’t care to spoil anything. It is beside the fact that despite what comes of Holly’s visit to DeMarco that Nick is paid handsomely for his services and so he decides to take Cyrus to a casino and gamble his money away.

What’s interesting about the film is that it doesn’t break any kind of mold and in fact settles comfortably into the generalities of what we expect yet it has an edge to it that stems from the seedy underbelly of its atmosphere. As mentioned in reference to Statham’s The Mechanic earlier, Wild Card also has that dirty, grimy texture about it that tells us it’s probably something we shouldn’t see-a side of society that doesn’t care to be exposed, but one that is all the more interesting for those reasons. As directed by Simon West (The Mechanic, The Expendables 2, Con Air) this is something we expect, but what is unexpected is the way in which it layers in its characters on top of the narrative that isn’t as important for its plot points as it is for the mentalities of those we become invested in. Why is Nick Wild both so giving and yet so greedy? Why does there seem to be a history between he and Holly that has yet to be explored, but still decides to go no further than a business relationship? Why is Cyrus not all he initially seems to be and what are his motives for specifically seeking Nick out? What makes both of them so special to one another? The questions become layered and build up a nice amount of intrigue as we watch the physical actions of these characters, sans any metaphors or bigger meanings, go through with not what they seem to want to do, but with what they feel is expected of them. This may all be digging too deep into a movie that simply wants to hit an action beat every half hour so as to give the audience their money’s worth, but as it comes from a novel by William Goldman (Butch Cassidy and the Sundance Kid, Princess Bride) and is a re-make of the 1986 Burt Reynolds film, Heat, there is no reason to think there shouldn’t be more depth to the typical-seeming going-ons. Having not read or seen either of these source materials I simply assume there is some weight to them that has been passed on in this latest incarnation for despite Wild Card being another in a line of standard Statham actioners he and all involved are at least clearly putting forth some effort.

What is most disappointing about the film though is the way it under utilizes its rather exceptional supporting cast. Remember when I mentioned that Jason Alexander in the second paragraph? Yea, well that one scene near the beginning of the film is the only time you’ll spot him despite his character being the leads business partner. The same is true of Max Casella (who you may remember from Blue Jasmine) and Sofia Vergara who appear in the opening scene and that, because it is Vergara, you assume will tie back into the bigger plot of the story, but don’t expect to see her returning to the thick of things as most of the faces you’ll recognize here outside of Statham, Angarano and Hope Davis are all but cameo appearances. Why Anne Heche felt the need to show up to play a waitress for less than a handful of scenes speaks more to her current status than anything else as it could have honestly been played by anyone. Stanley Tucci also shows up for a rather terrific scene near the end of the film and the audience is led to assume their is a history between Statham’s character and Tucci’s hotel and casino owner simply referred to as “Baby” but there is no proof of such. This all leads to the bigger issue with the film in that it is too short. I often complain about how if only films knew where to trim the fat we might be blessed with more lean and focused narratives that turn solid films into great ones, but here we come to the conclusion so quickly we wonder how we’ve already arrived at such a point. If there were only a few more scenes sprinkled throughout to fill out some of these underdeveloped supporting characters with great actors playing them we might feel more substance within the arc as I was clearly already invested in the core characters. In that regard, I guess you can say Wild Card leaves one wanting more, but in fact it is simply another one of these Statham films that could have easily been so much more, but will instead be quickly forgotten.

Castles in the Sky