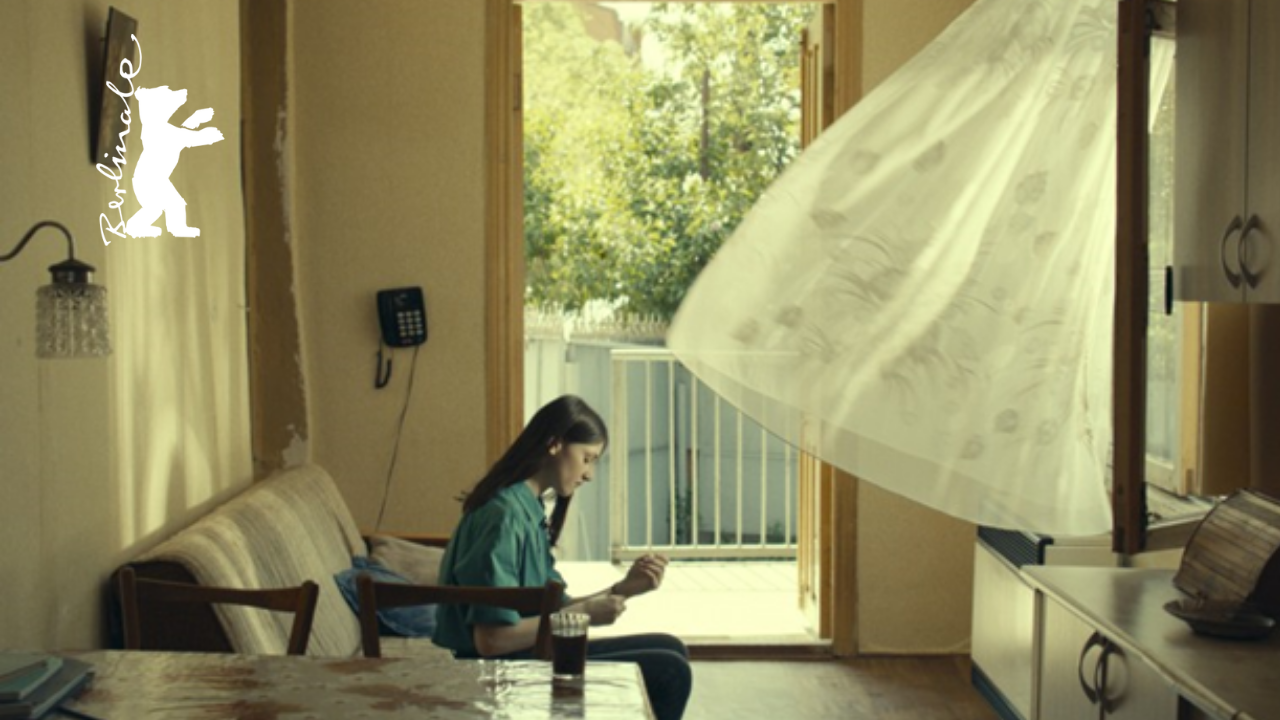 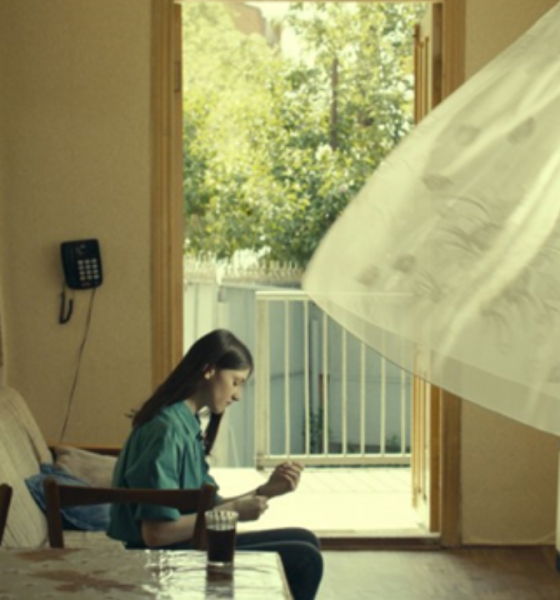 Alexandre Koberidze is such an evident cinephile and lover of life that you cannot help but want to talk and talk and talk about the hundreds of flourishes and features in his work.

Georgian director Alexandre Koberidze’s What do we see when we look at the sky? is a fairytale film. A man and a woman meet, falling in love, only for an evil eye’s curse to pull them apart. It is also a football film. Not only does the film’s ambitious 150 minutes dedicate a fair share of its length to shining a light on the Georgian populace’s obsession with the beautiful game, but its most gorgeous sequence is a four-minute slow-motion scene dedicated to a group of kids having a kickabout as 1990 World Cup anthem Notti Magiche plays out in all its glory – the scene described is the greatest contribution to football’s presence on the big screen since Santi curled a free-kick in against Liverpool at the death to win Newcastle the Champions League and make his nan proud in Criterion Collection candidate GOAL! It is also a film made as a paean to Georgia itself, a beautiful, richly cultured country whose spoken language is as beautiful as its curled alphabet, which in turn is as beautiful as the land itself – a place where the sun kisses the city streets as affectionately as it streaks through the gaps in the trees, promising magic untold unfolding below. And that’s just at a surface level, as layer upon layer has lovingly been added in by the writer-director, culminating in a film that has grown on me profoundly in the time that has passed since it first screened at this year’s Berlinale

Koberidze’s film begins with a meet-cute. Filmed from the knees down, we see a young woman – pharmacist Lisa (Oliko Barbakadze) – in red slacks and sandals and a brown-trousered, black-shoed man – footballer Giorgi (Giorgi Ambroladze) – walk towards each other. They collide, and they both will have lost their ability to do the thing they are most passionate about. And with that, as well as a playful intertitle and narration (Koberidze’s narratorial interjections are a joyous, Hugo-esque thing), beckoning us as an audience to LOOK AWAY ON THE FIRST SOUND, LOOK BACK ONLY ON THE SECOND so that a classic switcheroo can take place, our story proper begins.

Played by newcomer and absolute natural Ani Karseladze, she wakes up and, as was prophesied, has become entirely unfamiliar to herself. At the same time, Giorgi – Georgian superstar Giorgi Bochorishvili – does the same. With Lisa unable to remember any of her med school education, and with Giorgi hilariously incapable of controlling a football or even getting on the pitch as his curmudgeonly manager has no idea who he is, the pair are forced to throw away their past lives for pastures new. Lisa takes a job working at a café tucked beneath trees whose arms act as if they’re hiding a present, whilst Giorgi takes to running a strongman challenge on the bridge directly opposite.

Time passes, and as the narrator observes, ‘Giorgi and Lisa saw each other every day, and they waited for each other.’ These softly spoken, poetic lines nurture the fairytale held in the film’s heart, and it is our privilege and pleasure to watch these two lovers exist in one another’s orbit as fate or good fortune work tirelessly to gravitate them towards one another. By the time they eventually do meet, sharing a Georgian sweetbread delicacy whilst surrounded by ethereal fairy lights, Koberidze’s toying with magic, realism, and magical realism convalesces and converges upon one of the most unaware yet romantic scenes I can remember in recent years. The director’s brother, another Giorgi, scores this scene – as he does the whole film – superbly; to listen to Giorgi Koberidze’s myriad enchanting, inquisitive musical movements is to be book drops between them which the man retrieves in gentlemanly fashion, and within a few moments this serendipitous encounter is seemingly forgotten.

Even in these early moments, Koberidze’s quirky sensibility as a filmmaker and DoP Faraz Fesharaki’s keen eye for evocative framing has seen the duo imagistically literalise the idea of dancing around an allusion to romance – feet found in such close proximity are reserved almost exclusively for lovers and for people stuck uncomfortably close together on public transport. As Lisa and Giorgi then go about their day, we see them working in semi-symmetrical sequences before shedding their second skins – a lab coat for Lisa, a football kit for Giorgi – and returning to themselves as they really are once more. This notion of true selves and the myriad ways in which we obscure and find obscured who we are is a thread that runs through Koberidze’s film – What do we see when we look at the sky? may be the philosophic question that forms the title, but what do we see when we look at one another is the more pressing question that the Georgian filmmaker puts to us.

When our two protagonists bump into each other again then that night, this time framed from afar to invoke the minuscule chances of their second meeting on the same day, they find themselves with their defences down and agreeing to meet for coffee the following morning. Lisa and Giorgi’s fledgeling romance is interrupted at this point as the film’s fairytale element comes into play. As Lisa walks home, a traffic light, a drainpipe, and the wind, amongst other ordinarily unspeaking things, intervene to warn Lisa that the Evil Eye is upon her. Though Lisa is told enough to know that she will wake the following morning entirely unrecognisable to even herself – which really sucks as she and Giorgi have forgotten to tell each other their names – the wind is remiss to mention the fact that Giorgi is going to wake up equally unrecognisable. Oh, reminded of how intrinsic and essential a score can be in communicating the otherwise incommunicable and in elevating a great work into the realms of the masters.

Parallel to this great traditional romance that slowly burns throughout Koberidze’s film, we get the aforementioned football film, the love letter to Georgia and, more specifically, the beautiful old city of Kutaisi, and other quirky, captivating sub-plots involving stray dogs and documentary makers that flirt with out-and-out vérité documentarian cinema whilst being unbound by the laws of reality. As Koberidze’s overfilled cup of conceits and creative ideas runneth over, initially, the sheer scope of the director’s work can become overwhelming. The trick is to drink it all in without worrying about what’s spilt on the floor – everything we are given and give ourselves to is pure escapist bliss, and everything that we miss now may become apparent later.

I’ve written so much and seemingly said so little, but such is the inspirational quality of What do we see when we look at the sky? Alexandre Koberidze is such an evident cinephile and lover of life that you cannot help but want to talk and talk and talk about the hundreds of flourishes and features in his work. Suffice it to say, however, the more time that passes between my time in Kutaisi with this film and where I am now, the more I yearn to return to a place where we have been given a touching reminder that magic surrounds us if only we keep our eyes open to it. I thought this was a great film – I know now that it is a masterwork.

Related Topics:Alexandre KoberidzeBerlinale 71ReviewReviewsWhat Do We See When We Look At The Sky?
Up Next