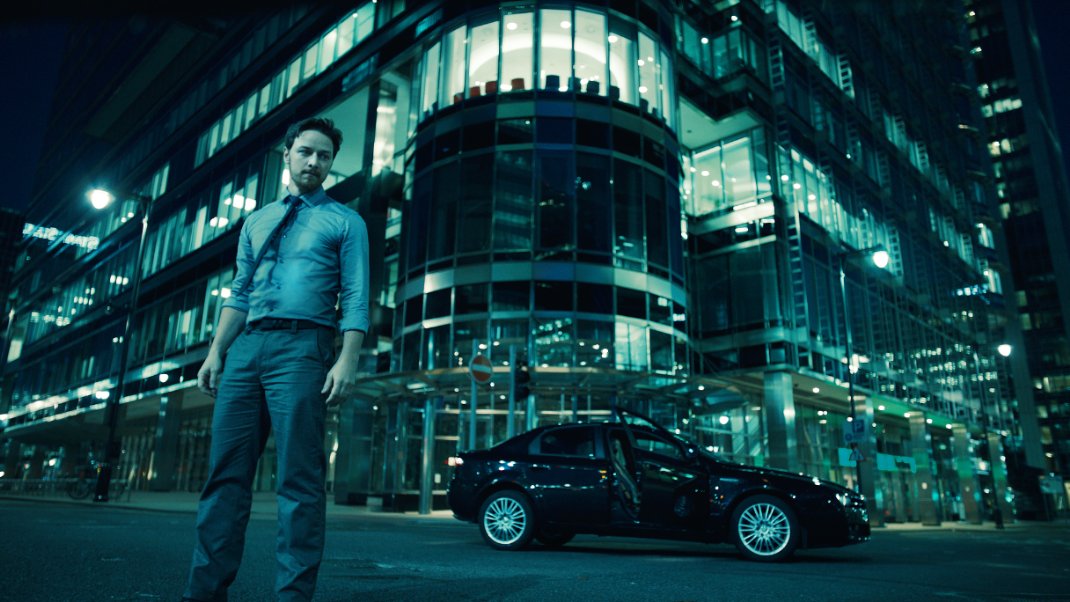 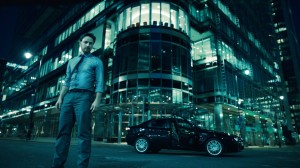 Confidently bursting onto the scene with the criminally unseen ‘Shifty’ in 2008, Eran Creevy effectively painted a gritty portrait of urban Britain. Now with the help of Ridley Scott (Executive Producer here) for his latest project ‘Welcome To The Punch’, he attempts to apply such a visual sheen and depict the glossy ‘heart’ of London in a manner we’ve rarely seen on the big screen. Seemingly eager to pay homage to the slick modern day thrillers crafted by the Michael Manns of this world within the confines of its modest budget.. Does ‘Punch’ deliver the necessary bang for your buck?

Predominantly set three years later after a thrilling and near fatal veichular pursuit, James Mcavoy continues to carve out a solid reputation as an ‘alpha male’ here as detective Max Lewinsky. Crippled by the mental torment of failing to capture an infamous criminal in the form of Jacob Sternwood (Mark Strong) as well as sporting an unpleasent knee injury, Lewinsky is almost relentless to right the Sternwood ‘wrong’.

Partnered up with the tough talking Sarah Hawks (Andrea Riseborough) whom to David Morrissey’s police Chief possesses ‘the same fire’ as Lewinsky, the opportunity soon arises. Fleeing to an isolated part of Iceland, Sternwood is reluctantly forced back to London after his wounded son Ruan (Elyes Gabel) contacts him after a planned heist doesn’t go according to plan. Whilst on the surface the case seems straight forward, it soon becomes apparent Max is knee deep in a wider conspiracy.

With the muscle of Hollywood and the flicks and tricks of Asian cinema, Creevy’s ambition is clear from the outset. Prove that us Brits are capable of delivering a stylish and sophisticated actioner. In its early infancy, the film does occasionally get bogged down and revel in the clunky nature of its dialogue and familiar settings veering dangerously close to a televised episode of Law and Order. To much relief however, ‘Punch’s intricate and well thought out plot soon subverts expectations allowing the film to garner much needed momentum. Peppered with the controlled bullet flying frenzy of its action sequences, Creevy’s suitably inventive direction aids his cause whilst delivering a striking and desaturated vision of the capital.

Boasting an impressive homegrown ensemble, ‘Punch’ is anchored efficiently by Mcavoy’s gruff intensity and the magnetism of the underrated Strong as Lewinsky and Sternwood. With the built in backstory of their characters’ fierce history, their sporadic verbal/physical exchanges are all the more satisfying. Whilst arguably under-utilized as they succumb to the narrative demands, the talents of Andrea Riseborough, Johnny Harris and David Morrissey all make a lasting mark in their respective roles.

Whilst not quite in the league of the genre classics it attempts to emulate here, Creevy’s film is far from a pale imitator. ‘Welcome To The Punch’? You’ll be glad to take the hit. A slick and taut Brit thriller, solidifying its director as an emerging talent worth keeping your eye on.