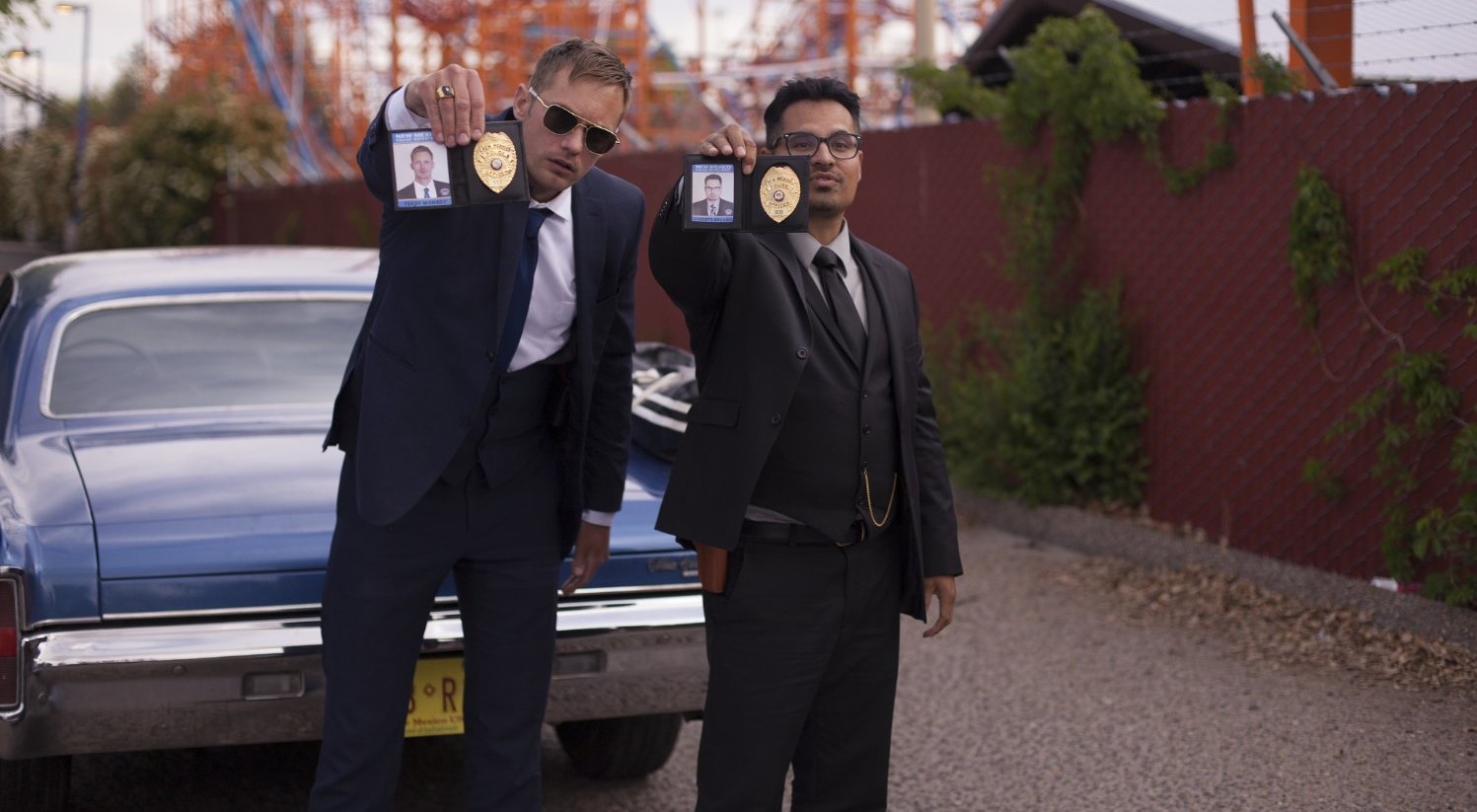 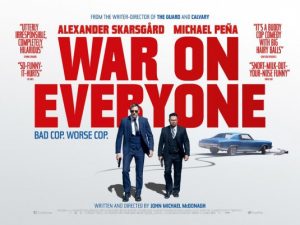 Take a look at that poster.  If you loved ‘Calvary’ or generally like the work of John Michael McDonagh, you won’t be able to resist the idea of his latest film.  But hold on a second.  This is no ‘Calvary’ or, indeed, ‘The Guard’.

McDonagh’s humour has always veered towards the dark and in ‘War On Everyone’ he’s gone all out on the comedy front.  And gone to Hollywood to do it, so it’s a million miles from his other two films.  Alexander Skarsgard and Michael Pena are two disreputable cops: corrupt, heavily into booze (Skarsgard especially), sniffing the white stuff and more than happy to take anybody’s money, however filthy.  When they come across a lucrative robbery, it’s like a gift from the gods: they use an informant on the inside to get their hands on the dosh and the deeper they dig, the dirtier and seedier it gets.

Cue lots of car chases, shoot-outs and bad language.  None of which are unusual in 15 certificate comedies, but the trouble is this is essentially a one gag movie.  The offensive style of humour makes you laugh at the outset, but you feel guilty about it and, even though it has some shock value, it doesn’t last very long and the whole thing becomes transparently thin far too quickly.  The two are just a pair of mucky-mouthed anti-heroes and little more, despite their efforts to generate laughs and Pena’s love for spouting philosophy at top speed.

There’s one solitary running joke that’s the exception and works rather well.  Skarsgard’s taste for the music of Glen Campbell.  Wherever he goes, he checks out the available music to see if his hero is on the playlist.  In fact, Campbell is the mainstay of the soundtrack and his squeaky clean style of country music is the perfect contrast to the foul mouthed action on the screen.  If only the film had more gags like this one.  As it is, it stands head and shoulders above the others simply because it’s just about the only one that works.

The opening scene leads you to believe you’re in for a 2016 version of ‘Starsky And Hutch’.   The car chase is very much in the style of the 70s favourite, all high speed screeching wheels, but in a blue car instead of red and white.  This,  however, is a dead end.  The idea doesn’t go any further and all we get are constant reminders from Skarsgard’s character that he loves the car because it’s indestructible.  And the way he drives, it needs to be!

This kind of comedy, if you can call it that, really isn’t McDonagh’s forte.  He’s lumbered with two central characters who play the same note throughout, so that any interest actually comes from the villains, the best one being the creepy club owner Birdwell (Caleb Landry Jones) who’s a combination of eccentric and downright unnerving.

You may get some guilty laughs from ‘War On Everyone’, but overall the film begs a couple of questions.  What did McDonagh think he was doing?  And why did he bother?  There’s also a line missing from that poster, straight after “Bad cop.  Worse cop.” It’s “Terrible film.”