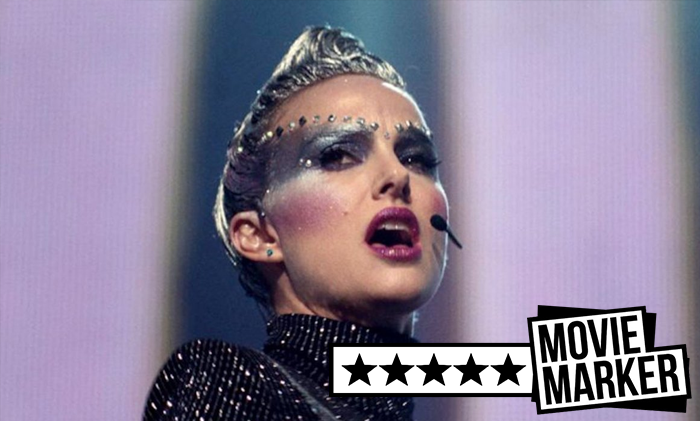 Brady Corbet came to Venice in 2015 with The Childhood of a Leader. He left the Lido with Best Director and Best Debut in the Horizons section. He is a true visionary and a director of the future. Vox Lux should be seen without knowing much. Corbet film follows the life of Celeste (Raffey Cassidy/Natalie Portman); after a harrowing life changing incident in her teens. Celeste captures the nation with her powerful song and her star begins to shine. As her career begins her sister Eleanor (Stacy Martin) chaperones Celeste’s’ career along with her manager (Jude Law). During a period of twenty years we see the change in her life and turn up to a tormented and egotistical Celeste played by Natalie Portman. We journey through the trials and trepidations of her stardom and PTSD.

Vox Lux is far from the feel good melodrama we expected. Brady Corbet takes no prisoners in this haunting and eye opening character study. The prelude’s horrific opening shows you the true scale of Celeste’s pain. Not since Gus Van Sant’s Elephant have I been left so shaken and unnerved. The shooter will be a prominent factor is her life and how she moulds herself. Shot in 35mm by Lol Crawley, whom Corbet had already worked with on his directorial debut. Crawley juxtaposes the pallet of the film from younger to older with bright blues to pastille greys. It impacts the tonal setting of Vox Lux and it is fine work from Crawley. Packed with a punchy and whimsical narration, and divided into a prelude, two acts and a finale. Vox Lux does not follow a three-act plot act but a collection of moments in Celeste’s whirlwind life.

Brady Corbet brings an amalgamation of themes to Vox Lux. Due to it’s short run time he doesn’t always achieve resolving them. This may be considered a flaw; but it’s Corbet’s intent to leave the audience thinking about the implications of the actions of Vox Lux. He distorts the fluidity of the piece by changing lenses, cameras and angles when possible. Corbet gives Vox Lux this painful and disturbing feel through out. During a repetitive tunnel shot (very Lynchian I may add) we are travelling through a re-occurring nightmare Celeste has. She feels helpless and can’t help a person on the side of the road. Clearly the trauma of her ordeal has become unrepairable for her. The flare of the dialogue give bold realisations about the entertainment industry. Celeste will tell her daughter that her aunt lacked a niche! Without a sad story or angle you won’t succeed in the industry. The sad realisation of this is true for most artists.

Natalie Portman brings Celeste to life in more ways than you could imagine. She gives a very bullish performance. The vast complexity of her character is the stuff of dreams for any actor. Portman can be eccentric the one minute and become severely depressed the next. The world took her for granted but she has created more demons for herself. Her choices in life have become extra shackles to the burden she is carrying. Natalie Portman brings Celeste to life like no other actress could. As for Raffey Cassidy her innocence transcends to darkness in a short space of time. You can feel the that her and Portman have embodied Celeste perfectly. Brady Corbet may have brought the best film to the Lido with Vox Lux. The pure shock factor, emotional layers and intelligent artistry make Vox Lux one of 2018’s finest films.