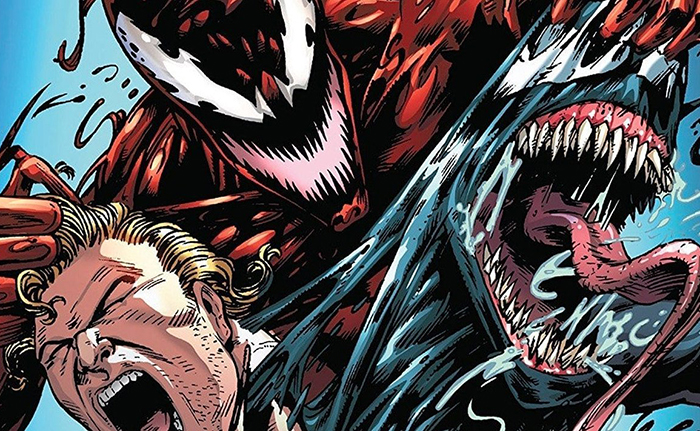 When a Venom movie sans-wallcrawler was first announced, many assumed that the smart move would be pitting the black symbiote against well-known comic antagonist Carnage; a red palette-swap of the film’s titular antihero, inhabited by serial-killer Cletus Kasady.

However, that turned out to not be the case. Sony still went with the age-old classic superhero movie villain formula (exactly like the hero, but, y’know, evil – see also; Iron Man, The Incredible Hulk, Ant-Man, Doctor Strange, Black Panther, etc etc.) but eschewed the better-known Carnage for, of all characters, Riot – a silver-coloured symbiote inhabited by Carlton Drake, head of the LIFE Foundation, and birthed from an oft-forgotten 90s comic book arc.

When asked the reasoning behind the decision to scrape through the bottom of the Marvel barrel and to drudge up a Z-lister like Riot for their initial, flagship Spidey-cinematic-universe-minus-Spidey feature, producer Matt Tolmach gave an almost unbelievably pathetic excuse:

“[If you have Carnage] you have two origins, and it really limits. We thought about it long and hard. It limits what you can do with the origin of Venom. So, what do you do with that? Well, then the movie itself becomes the origin of Venom, and then Carnage enters the equation. That was always the idea, that you would be setting it up, from the very beginning.”

Now, putting aside that the movie gives an origin to Riot as part of its structure, and the fact that the movie’s post-credits scene gives a pretty complete set-up for Cletus Kasady (portrayed by Woody Harrelson, donning an incredibly cheap-looking ginger wig), it’s still a staggeringly weak reason. Complaining that a villain also needs setting up – something that most superhero origin films manage to pull off quite neatly – smacks of an almost impressive level of laziness. Granted, once you’ve done ‘Venom vs. Carnage’, there’s not a tremendous amount of places left to take a webslinger-less Venom franchise, but it’s still going to feel deliriously samey when/if Venom 2 rolls around.

Venom stars Tom Hardy and is in cinemas now, rated 12A.