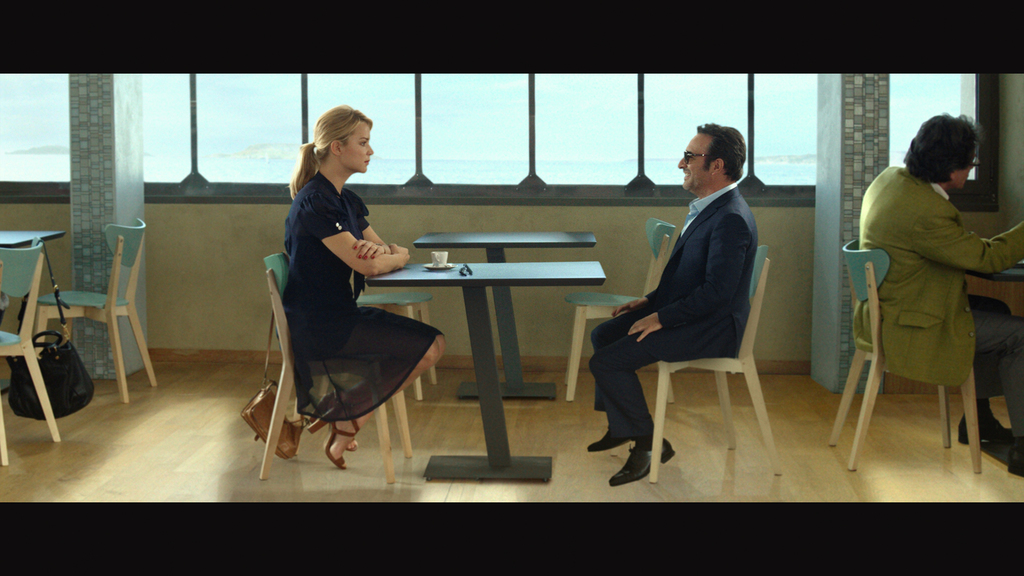 Up for Love is the much-anticipated French-language rom-com by writer/ director Laurent Tirard (Moliere, Nicholas on Holiday). A real gem for cinefiles, the film offers a fresh, joyful sense of humour and is a comedy with real heart. Quirky and romantic, it’s the feel-good film of the summer.

The film opens with Diane (the dazzling Virginie Efira who should really be in more movies), a brilliant and beautiful lawyer. A series of fateful events lead Diane to receive a phone call from the mysterious Alexandre (Jean Dujardin, The Artist), who has found her lost mobile and wishes to meet up to return it. Courteous, funny, and effortlessly charming, he soon wins Diane over… and before she knows it, she’s agreed to a date.

But their first meeting is not quite what either of them expected, as Alexandre, although handsome and the very definition of charismatic, is 4 foot 7 in height.  Will Diane be able to push her superficial first impressions aside in the face of true love? Up for Love takes you on a journey which is both funny and poignant, as we ourselves face up to the question; how superficial have we become in our culture? Would we turn love away?

A remake of Corazón de León, an Argentinean film by Marcos Carnevale, Tirard was able to breathe new life into the subject matter by setting it in the bright, sun-drenched setting of Marseilles, France. Alexandre is a brilliant architect; he is rich, has a beaming smile (straight out of The Artist– remember that Hollywood smile?), and is a real family man, being a single parent to his son, Benji (César Domboy).  They have some really great scenes together, one being a scene in which Jean teaches Benji how to go about realising his dreams. He inspires those around him, and the audience cannot help but become fascinated with his joie de vivre.  Cleverly, the narrative seduces the audience, so even they are bought up short with the sudden reminder of Alexandre’s height in pivotal scenes.

The chemistry between Alexandre and Diane is great; they bring out the best in each other; Diane is a worrier and Alexandre is impulsive and quirky.  The fine line between awkwardness and social embarrassment is tested again and again as the couple begin their courtship.  It’s pursued very sensitively and, in the grand french tradition, with elegance.

The movie is a marvel also due to the effects of making Jean that size.  It could be as simple as filming Jean on his knees (framing him at shoulder level) or forcing perspectives (placing him farther back so that he would look smaller).  It becomes a great asset to the film, as we peer into the frame, trying to guess how Tirard did it.

With similarities to films like Shallow Hall, Up for Love is a tender love story, which invites the audience into the narrative in an effective and engaging way. It’s a real treat for lovers of French Cinema, and recent films like Populaire, which can’t help but put a smile on your face.

Ingrid Bergman In Her Own Words