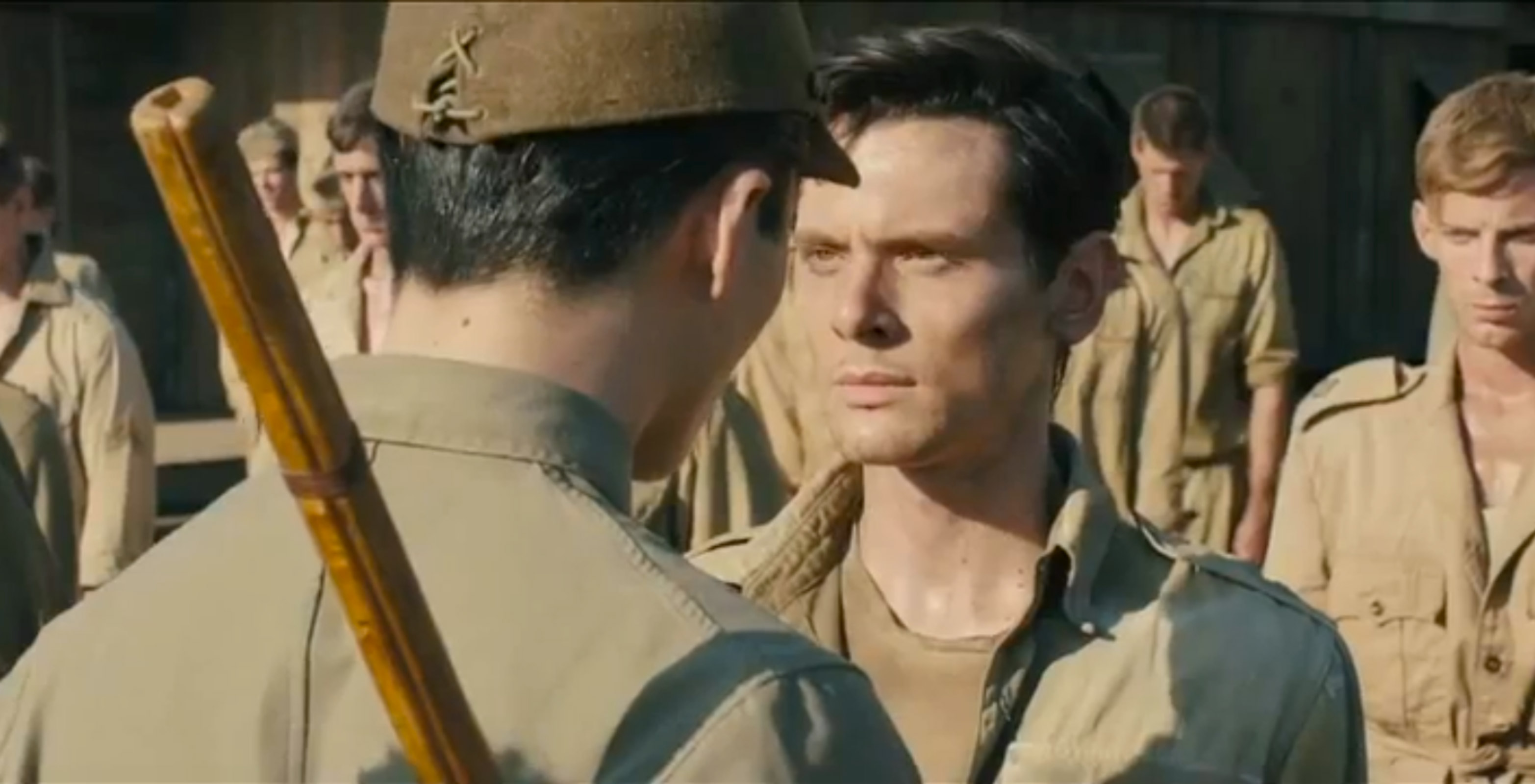 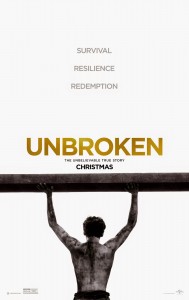 Unbroken is perfectly positioned and has every credential imaginable to become a classic Hollywood drama like those of years gone by. It is the kind of film that wins awards and pleases crowds as it not only serves as a testament to the will and strength of the human spirit, but chronicles a difficult road to overcoming impossibilities that should redeem our faith in ourselves and our race. Based on a New York Times best seller by Laura Hillenbrand, adapted for the screen by Joel and Ethan Coen, shot by Roger Deakins and directed by Angelina Jolie this film truly has everything going for it and while it may be intentionally old school in its structure and execution in this day and age it ends up feeling a little too calculated and at times way too amateurish for the talent it has behind it. That said, this is only Jolie’s second directorial effort and her first of this scale and so it is to be understood if some of the choices here feel safer than necessary. Where Jolie the director and Jolie the storyteller differ though are in their passion for the story and their ability to strongly convey all that it holds. It is obvious this is an inherently amazing story, one any filmmaker would be happy to try their hand at. What Jolie has brought to the project is the aforementioned classical approach that beautifully captures the scope and horror of the situations our hero fell into, but what it lacks is any real insight into the mind of this man who was pushed to his limits. Technically, everything looks great and is cohesive to the point that those watching will understand what is going on and even gather a deeper meaning from it to a certain extent, but only if you’re looking for it. Otherwise, Unbroken is unfortunately little more than surface deep. Again, it’s understandable given this undertaking comes from someone accustomed to solely focusing on one aspect of a production transitioning to a role where they are looked at to be something of an expert in all areas so if there is good news to take away it is that the film ends better than it starts. Almost as if it were shot chronologically and Jolie became a better director as the film went on. That may be something of faint praise, but despite the content of the film not being nearly as engrossing as it has the potential to be it is the good intentions and admirable effort that allow forgiveness for the moderate results of an extraordinary story.

As Jolie is trying to play with multiple strings in the beginning she does so in a way that doesn’t bode well for what I thought the film might turn out to be. She seemed to be trying so incredibly hard in fact that she was forcing Alexandre Desplat’s overwhelming score to overpower the subtle moments of realization in O’Connell’s performance while relying on a priests homily to convey the main ideas of the piece and voice over from announcers at Zamperini’s track meets to tell of his accomplishments that move the backstory forward. It makes the film feel cheesy and melodramatic to the point it seemed the remainder of the film would be a hokey and manipulative drag rather than the sincere, tough watch this story deserved to be. It is when Zamperini and his two fellow survivors are stranded on the ocean for a month and a half that it feels Jolie finally begins to hit her stride. She is given limited things to work with aesthetically and smartly strips the rest of her elements down so as to not become overbearing on this simple human story of survival. While all of this occurs within the first hour of the film it bodes well for where things are heading in that Jolie allows the actors to bring the hardships and struggles of surviving for that long at sea to the forefront of our consciousness. O’Connell is especially compelling in these scenes for, despite the fact we still feel we don’t know the character personally, we begin to at least see a side of him that speaks to his instincts. He is optimistic under the given circumstances even if he doesn’t secretly believe the odds are in their favor. He naturally assumes a leadership role and while he can do little more than the average man to keep he and his comrades alive he almost makes those around him believe he can. It is in this section of the film that, while naturally being something of a tedious exercise as we know what comes next, is also the most compelling as it gives the men nowhere to go and forces them to create the dynamic that hurtles Zamperini through the even tougher challenges that lie ahead.Louis “Louie” Zamperini (Jack O’Connell) is first presented to us as a soldier of World War II in the role of a bombardier on a B-24 Liberator bomber. He rides alongside the likes of pilots Hugh Cuppernell (Jai Courtney) and Russell Phillips (Domhnall Gleeson) as well as fellow bombardier Mac McNamara (Finn Wittrock). As per the old school template of how to make a Hollywood hit Jolie opens her film with an aerial fight as O’Connell as Zamperini divulges his pension for heroics and lighting things up like Christmas. Already, there is an opportunity to delve into the psyche of this character and give the audience a better look at his mentality or state of mind, a place to show where he’s at now and then in the inevitable flashbacks display how far he’s come. Instead, Zamperini drops bombs with no hesitation, not even a highlighted facial expression and thus we have no idea where this character is at in terms of headspace. Maybe he really didn’t have any hesitation in leveling cities, maybe he didn’t consider the lives he would be taking out in the blink of an eye, but the film being about the will to survive, the resilience of the human spirit and the redemption of this life derailed I doubt that was the case. After our initial introduction we are sent back to when Zamperini was a young troublemaker who hid alcohol, gawked at women and got into fights. He was on the fast track to nowhere, but thanks to his older brother Pete (John D’Leo and Alex Russell) he takes up running track and begins to excel in ways Pete didn’t even imagine. Pete pushes Louie, makes him work at what he comes to love and keeps him on the straight and narrow. Louie becomes so good at his craft he would go on to run in the 1936 Olympics before enlisting in the Air Force in 1941. This is all a precursor to the bulk of the story told in Unbroken though as much of what the film focuses on is his survival of a plane crash in the Pacific where he spent forty-seven days drifting on a raft. He, along with Phillips were then rescued (ehh) by the Japanese only to spend more than two and a half years living in prisoner of war camps.

Once Zamperini reaches Tokyo and is forced into the prisoner of war camps Jolie not so much shifts tone, but keeps her stripped down mentality intact while building back up to where she thinks she needs to be. If anything, there is a strong sense that the direction and composition are more than competent, but what is actually being captured is undermined by a lack of confidence. These camps are essentially places where Japanese soldiers force their enemies into slavery and beg them to challenge their authority so they might revel in the pleasure of punishing them. Why the Japanese keep so many men alive in these camps is a question I’m sure could be answered easily, but is not covered in the film and so I began to wonder not only what their motivation was for keeping so many pawns, but why Mutsuhiro Watanabe (Takamasa Ishihara) aka “The Bird” singles Zamperini out as well. The punishment of the camps and the constant picking on of our main character becomes repetitive to a point that we understand the extent of the damage being done, but never do we really see the repercussions. There are only a few select shots where late at night, after the days work is done that we see Zamperini laying in his bed, staring off into the night and no doubt contemplating how much more torture is worth what might be the rest of his life. The problem is, if you’re not looking for that, if you’re not actively searching for the depth to the lead character then you will blink and miss them. There is nothing wrong with subtlety and of course it is appreciated in many films with as obvious a message asUnbroken, but for being concerned wholly with this man and the trials of his life it never feels there is a strong arc to how these events affect him. Throughout the film never does O’Connell’s interpretation of Zamperini sway and so neither does who Zamperini is to us ever change. He is a man with his feet firmly planted in his beliefs (with a religious aspect meant to be significant that we don’t realize until the end credits) and so despite the film most definitely taking us on a journey the surrogate we take it with is just that, never giving us an inclination to his position, but letting us decide what we would do were we in his shoes which doesn’t completely make sense given it is this particular man’s story.