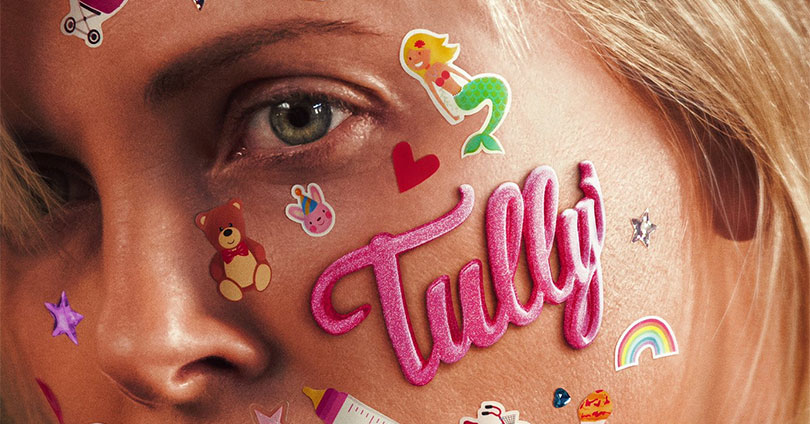 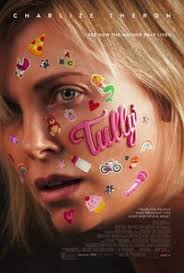 In Tully, the third collaboration between director Jason Reitman and screenwriter Diablo Cody, (Juno, 2007, Young Adult, 2011) Charlize Theron plays Marlo, a suburban mom with two young kids who is about to give birth to her third.

Marlo isn’t just struggling with the imminent birth and demands of another new-born – she has a difficult young son, Jonah (Asher Miles Fallica), whose behavioural issues mean he’s about to be ejected from his classy elementary school by its politically-correct but unfeeling bureaucrats, who label him as ‘quirky’, while his autistic symptoms are never honestly addressed by staff or parents.

Marlo also has a nine-year-old daughter, Sarah (Lia Frankland), to whom she can accord little attention, and Drew, (Ron Livingston), her well-meaning, but domestically ineffectual husband.

After the birth of her new daughter, Mia, Marlo tries to cope with the recovery of her body, the insistent, and sometimes painful, production of breast milk and the challenge of shedding her baby weight (realities which we rarely see mothers in movies having to deal with).

Director Jason Reitman presents an extended montage of the repetitive daily grind of caring for a new-born baby – the wakeful nights, the rota of feeding and changing of nappies, the school runs, teacher meetings and meal preparation undertaken under the constant fog of sleep deprivation.

Meanwhile, husband Drew works hard at his career, comes home, briefly helps the older children with their homework, and then spends the evening upstairs playing video games, or is literally absent, traveling for his business. He is often emotionally oblivious to the increasing pressures building to a crisis in his wife’s daily life.

It’s Marlo’s rich brother Craig (Mark Duplass), whose smug wife (Elaine Tan) and three children have had the luxury of all the childcare money can buy, who comes up with a suggestion: as a gift to his sister, he offers to pay for a ‘night nanny’ – a ‘mothers’-helper’ who arrives after dark to look after the baby throughout the night. This will allow the mother to catch up on sleep and, when required, the night nanny will bring the infant to feed in bed at its mother’s breast.

Marlo resists the idea until her body is exhausted and her wits are at an end, then she calls the number Craig has given her. The young woman who shows up at the door that evening is called Tully (Mackenzie Davis), and is a caring, vivacious, 26-year-old, who seems wise beyond her years. Reluctant at first, Marlo soon finds herself succumbing to the amity, charm and calm her new friend brings to her life, and she forms an unusual bond with the friendly, free-spirited young woman.

Theron gives a powerful performance, emotionally raw, unglamorous, physically intense – the picture of a beautiful woman who has lost control of her body and her life, battling with exhaustion and anger, overcome by the demands of motherhood.

Mackenzie Davis plays a counterpoint to this beautifully. As she has proved in the excellent TV series Halt and Catch Fire, Davis is a fearless actress, attentive and generous to her fellow actors. Theron responds in kind and their relationship becomes an intriguing exercise in a kind of emotional seduction. Although she often finds Tully’s questioning rather personal, Marlo begins to undergo a poignant examination of her past, her unfulfilled dreams and expectations, and her current place in life, and so to settle.

The climax comes when Tully persuades Marlo to sneak off for one night, leaving the sleeping baby in the house with unsuspecting husband Drew. They drive to Marlo’s funky old neighbourhood where she was single, for a girls’ night out. There they drink bourbon in bars, head bang at a black metal gig, and wind up in a grim, graffitied bathroom trying to drain Marlo’s breasts of the milk that is painfully engorging them, (I don’t think anyone else has yet been brave enough to feature a scene with a woman squirting her troublesome breast milk into a toilet bowl in a dingy bar!).

Although writer Diablo Cody portrays Tully’s arrivals under cover of darkness as somewhat akin to the visits of the mysterious and winsome mermaid who regularly appears in Marlo’s dreams, director Reitman cleverly balances this by framing the scenes between the two actresses in entirely mundane, realistic circumstances and then just letting the two excellent leads do their job.

Tully is an unusual film, as Reitman and Cody unflinchingly, yet engagingly and compassionately, portray some of the more difficult realities of motherhood, when, challenged by sleep deprivation, the complications of the post-natal body and the grind of constant physical demands, some mothers might feel that they are close to losing their minds. Perhaps then, like Marlo, they might be forgiven for finding their own individual method to diffuse their struggles, in order to avoid being utterly overcome by them.