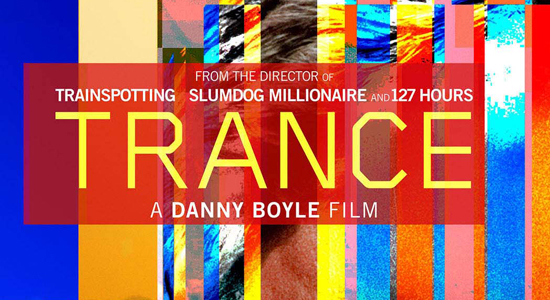 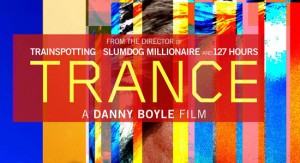 2012 was most certainly Danny Boyle’s year.  Not for directing a film, but he was put in charge of artistic direction of the London Olympic opening ceremony, and to great fanfare it was heralded as a monstrous success. He captured the essence of Britain in a traditional form, and a modern day Mobile phone, Twitter-obsessed Britain. In between doing this Boyle had been deeply involved in his next movie, all filmed on location in London. One would think, could he have too much on his plate?

Art auctioneer Simon (James McAvoy) is an inside man part of a heist of a priceless piece of art, but when everything seems to go to plan, the painting seems to be lost and Simon from a large blow to the head, can’t remember. He seeks a hypnotherapist’s help to help him and his criminal partners find it.

I quite frankly enjoyed this film, it’s quite a mind twister at times, which leaves you thinking, are you in Simon’s dreams or is this reality? But nevertheless it’s a very well thought out story, also when you add Boyle’s direction it can only be a winner. It is all about exploration of the mind and its weaknesses, which is quite an interesting subject. It certainly packs a punch, that includes some quite violent sequences, with the added gore. Don’t let it put you off, because it seems quite minimal.

The three main players James McAvoy, Vincent Cassell and Rosario Dawson all deliver good performances. All gel very well together. But easily Dawson is the standout as Elizabeth, she is such an underrated actress.

The soundtrack which is mostly composed by a Boyle favorite Rick Smith, one half of the Dance duo Underworld, gives it that typical Boyle feel, setting the mood of the film in quite a brilliant way.

It feels like after all the Olympic official stuff, Danny is finally letting his hair down, so to speak. In his way making a nitty gritty heist mystery film, because that is essentially what it is. If you see a case for more money to be invested into British cinema, I would argue with this.