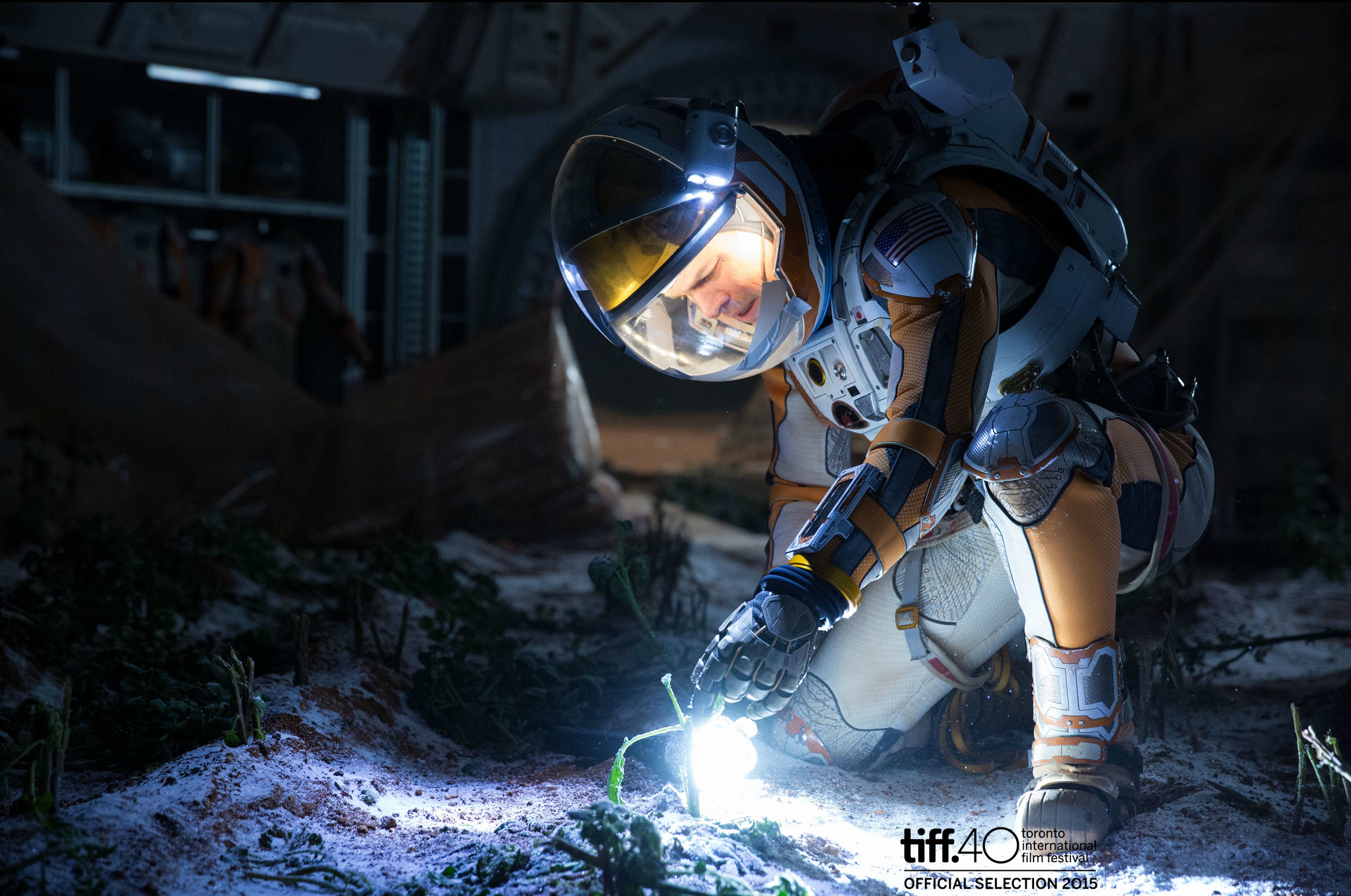 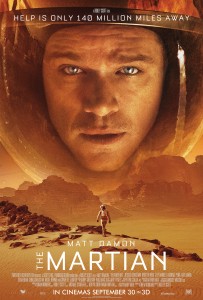 It’s weird. With everything The Martian has going on and going for it you’d think it might be more of a straightforward action film, but rather this is a movie about problem solving. Problem solving in the cheesy sense of never giving up, but legitimate in that our protagonists circumstances have him stranded on Mars. These days, one almost goes into a Ridley Scott (Alien, Blade Runner, Gladiator) picture with the expectation of receiving something handsome without necessarily having any sustenance and that reaction has been warranted over the last few years (Prometheus has it’s lovers and it’s haters, but I’m in the former camp). What makes The Martian different than say Robin Hood, The Counselor or even Exodus though is that it once again sets the director up in what seems to be his most comfortable and inspiring setting: space. In going back to the cosmos, the director does his own problem solving and dives head first into his grand new science fiction film by embracing every aspect that makes up this story. Whether that be in the Mars-based segments with Matt Damon’s astronaut Mark Watney or on Earth at the various NASA headquarters with engaging intellects like Chewitel Ejiofor and Jeff Daniels. Beyond having rounded up a stellar cast Scott has more or less crafted his most entertaining film in years by really seeming passionate about the material. Of course, rather than space, this could be the reason all of his films taking place out of our planet’s orbit tend to generally turn out for the best. Scott is an explorer, a man who likes his scope large and his stories fairly bombastic. What bigger canvas is there to paint on than space?

Before we know anything else in the film we know there is a strong camaraderie between the crew of the Ares III mission. Led by Captain Lewis (Jessica Chastain), the rest of the team includes Rick Martinez (Michael Peña), Beth Johanssen (Kate Mara), Chris Beck (Sebastian Stan) and Alex Vogel (Aksel Hennie). It is when an unexpected storm rolls up on the crew as they walk the surface of mars that they are forced to evacuate their mission. In making their way to the escape pod Watney is impaled by an antenna during the storm destroying his flight suit’s bio-monitor computer, rendering his crewmates unable to detect him and leaving them to believe him dead. In reality, Watney’s injury proves to be relatively minor, but with no way to contact Earth, he is forced to rely on his scientific and technical skills to survive. Given Watney is a botanist and mechanical engineer though, he has a leg up on the typical competition. While the odds still seem insurmountable there is certainly hope. Enter the problem solving skills. Watney begins growing potatoes in the crew’s Martian habitat (or Hab as it is referred to) and burning hydrazine to make water. On the other side of things, millions of miles away, NASA is working tirelessly to bring Watney home. While Ejiofor’s Vincent Kapoor (Head of NASA Mars Missions) and Daniels Teddy Sanders (Director of NASA) feel it best to not allow the information that Watney did indeed survive and is still alive to reach the ears of his crewmates for the sake of their own sanity the world looks on anxiously. And so, with those odds stacked against them NASA and Watney work tirelessly to come up with and conduct a plan that will guarantee his safe return.

If you’ve been living under a rock as of late The Martian is actually based on Any Weir’s best-selling novel that he originally self-published. Having read the book I was curious as to how Scott, but more screenwriter Drew Goddard (Cabin in the Woods) would go about adapting the dialogue heavy narrative. While the NASA segments and much of the third act are told from a third person omniscient point of view a large portion of the first half of the book is strictly Watney’s logs that he creates to keep a record of his activity. These log entries are plagued with massive amounts of scientific verbiage as much of the time I wasn’t exactly sure what I was reading was supposed to add up to, but trusted that by the time Watney made it around to his point I would understand. This of course worked out fine for my brain to process when reading the words on a page, but Goddard wisely streamlined much of this information into clips of Damon talking straight into the camera while at the same time working on whatever he was describing giving audiences a visual feel for what was necessary to continue to survive.

Damon, who at this point kind of seems like the obvious choice, is really terrific as Watney. He fully embodies the laid-back All-American astronaut who has a generous sense of humor while never not being able to convince us that he’s indeed as intelligent as he’s supposed to be. What is refreshing about The Martian is that the majority of the time Scott keeps things rolling by having his editor give the film a breathless pace, but every once and a while he’ll stop to take a breath and let the bigness of the situation sink in not only on the audience, but on Watney. Watney is like the movie in this sense. He is constantly working, figuring things out, planning his next excursion, attempting to fix communications, plotting how to grow things on a planet that doesn’t typically stand for such things, but every once in a while he’ll stop and look around. There is a specific sequence such as this late in the film where Watney discusses the fact that any time he does something on Mars he is the first person to do so. That the planet has existed for billions of years and yet he is the one to accomplish a number of firsts on it’s surface. It is a wonder what that kind of realization does to a man psychologically and if you’re wondering you can guess as much by the ticks and body language that Damon puts into his performance. Moments of simple realizations within confined spaces draw tears from him and send chills down us, but the realization that he might die there is the one that continues to push him to solve problems. Without this kind of can-do mentality that is so present in Damon’s interpretation the film wouldn’t feel nearly as weightless or fun, but Damon is our All-American boy and he hits a sweet stride here that truly makes the film more than entertaining, but affecting.

While all of the credible facets that The Martian has going for it make it seem like it would be a very serious, dramatic picture about saving a man’s life there is plenty of humor here as well. It’s funny. Just like it would seem to be an action film it seems it’s main genre distinction would be drama, but that the film turns these expectations on their head and delivers a frequently humorous film with more focus on the details than the broad missions make it all the better. This is clearly taken from the novel as Weir provided his lead character with a great, relatable sense of humor while making jokes concerning how bad seventies disco is that are both safe enough to guarantee a laugh while being safe from criticism for being too safe because of the dire circumstances. Scott takes advantage of this inclusion in the book to provide a lively and uniquely fitting soundtrack rather than have the typical orchestral swells at the expected turns. That isn’t to say there aren’t moments of tension. There certainly are and enough bad things happening and enough plans failing throughout that we never feel assured throughout the entire runtime that Watney will necessarily end up safe. Even better, these obstacles never feel like a reason to extend the runtime, but rather natural obstacles that a company and a mission as large as the space program would encounter.

This is all to say that Scott seems to have at least returned to ground where he can feel a purpose in his work because there is real weight to the motions that take place here. Sure, there are times when we wonder why Donald Glover or Kristen Wiig were cast for what essentially add up to be cameos or if there wasn’t a better, less overly dramatic and ridiculous (no matter how scientifically accurate) way to stage the final act, but the good outweighs the bad. The film is beautifully shot (no surprise there) and gorgeous to behold on the big screen. The NASA scenes are as modern, but lived in as we could expect from those working around the clock while the Mars scenes are claustrophobic when necessary (in the rover, in the hab) and sweeping when reminding us of just how lost Watney really is. Ejiofor is especially terrific while Sean Bean is more or less rendered moot by the presence of both he and Daniels. It’s also a shame we don’t get to spend more time with the Ares III crew as there is both a lot of talent and chemistry there between the actors. Chastain, as always, is especially effective in her few larger moments. All in all though, The Martian is a thoroughly enjoyable science fiction film that puts the science front and center while allowing the human characters to serve as the most exciting aspects. More exciting than any battle scene could have proved to be. It’s weird. Apparently not all space adventures have to include aliens or extravagant spaceships to be exciting, but sometimes the will to live is enough to create something truly compelling.

A Walk In The Woods