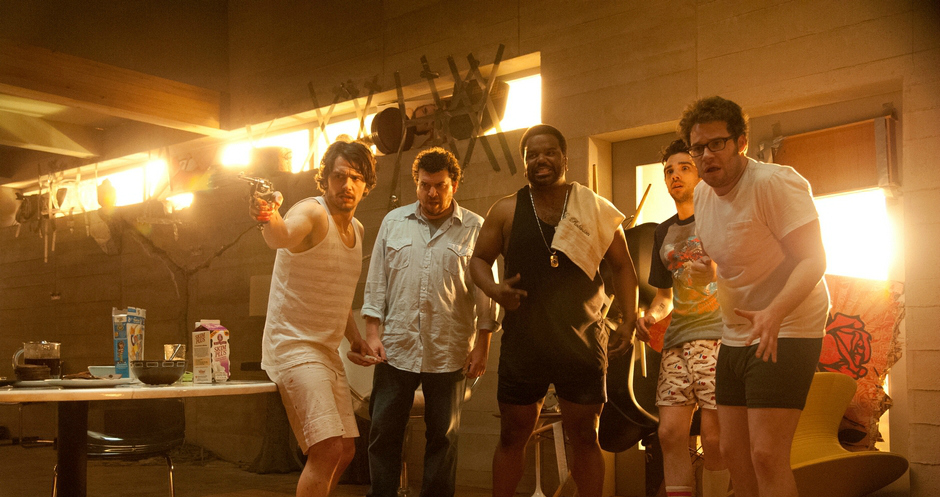 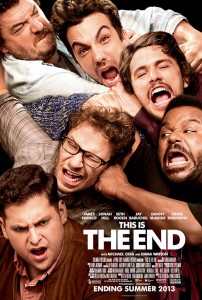 This is the End feels like the epitome of something I’ve been waiting a long time for. In reality it is slightly odd to think that this kind of product would ever be made and sold to general audiences, but luckily it seems the one almost guaranteed way for these actors who have now become staples of the American comedy scene to regain their place among the Hollywood elite and re-establish themselves as the kings of the comedy genre is to make fun of themselves and they do that to hilarious results here. Anyone who has ever been really into movies and has ever loved a certain comedic actor or group of actors knows what it’s like to want to hang out with those kinds of guys and girls because you too feel like they would love to be your friend if not for anything else but because you share that same sense of humor they’ve branded. As creepy as that may come off or as much as they probably wouldn’t care to be your friend at all we come to feel we know the actors in our comedies better than anyone else in the movies because they always relate closest to the kind of people around us, if not always intentionally. That may come off as slightly delusional to some, but to those who watch a good amount of movies, especially comedies, and to those that surround themselves with people that they find to be genuinely funny than I imagine it is as true for them as it is for me. All of that is to say that my anticipation and expectations for This is the End were pretty high. As one of the many apocalyptic comedies coming out this year I was also worried the film may not get the recognition I hoped it would so likely deserve, but first time directors Seth Rogen and his long time collaborator Evan Goldberg strike just the right chord between horror and comedy and lay claim to the fact they’ve had this in the works longer than anyone else. Thankfully, This is the End gives this brand of goofy subversive humor new life in the form of a sharp satire that invites us to experience the end of the world with who our minds have come to place as some of the most ridiculously funny people working today.

From the opening scene it is clear that we are in for a rather meta ride as Seth Rogen as himself picks his real-life friend Jay Baruchel up from the airport (this core friendship in the film comes from the short film that inspired the flick, Jay and Seth vs. the Apocalypse). Baruchel is the voice of Hiccup in How to Train Your Dragonas well as playing small roles in Knocked Up and Tropic Thunder. While Baruchel was not a part of the Freaks & Geeks group that seems to have slightly inspired these pairings of Rogen and James Franco, Baruchel became a part of the Apatow gang as the lead in their second failed sitcom effort, Undeclared. This was likely the beginning of he and Rogen’s friendship as Rogen has been a staple of Apatow productions from the very beginning (F&G also featured James Franco, Jason Segel, and Martin Starr). As they all play exaggerated versions of themselves here Baruchel is only in Los Angeles to hang out with his friend, but doesn’t necessarily like the culture of the city or Rogen’s new group of friends, especially Jonah Hill. While Seth delivers on Jay’s expectations for the first day of his visit things start to go downhill for Baruchel when Seth informs him they’re taking a trip to James Franco’s housewarming party. Upon arrival the two mingle with the likes of other featured players including the aforementioned Oscar nominated Jonah Hill, The Office’s Craig Robinson, and Michael Cera as a cokehead maniac. There are plenty of other famous faces littered throughout the crowd-Jason Segel shows up having conversation with Kevin Hart (who also appeared in three episodes of Undeclared) Chris Mintz-Plasse has a mini-Superbad reunion with Hill and Cera, Aziz Ansari, Mindy Kailing, David Krumholtz, Rihanna and even Emma Watson all make their way through the party until what is at first thought to be an earthquake shakes things up. Once outside it becomes all the more clear something much bigger than an earthquake is occurring as a huge sinkhole opens up in Franco’s front yard and the gruesome celebrity deaths begin. Paul Rudd even runs through the mayhem, making a pretty nasty mess in the process as the survivors (including Rogen, Franco, Hill, Robinson, and Baruchel) retreat back inside to figure out what the hell is going on.

Without giving too much more of the film away Danny McBride joins the core group and while the film, from here, doesn’t so much as have a structured story that goes from act two to act three as it becomes more an exploration of the dynamics between these guys and how they balance their celebrity status with how much they self-indulge and how close they want to get to others who may not be in the same league as them. This is clearly why Baruchel feels slightly on the outside. Each of them have had solid leading roles in hit movies or TV shows, but Baruchel’s most famous project has him behind an animated medieval boy. Franco, who knows he’s the most famous and most self-indulgent, has some kind of strange obsession with Rogen that leads to a conflict between who the better set of friends are. There is no real explanation for Jay’s hatred toward Jonah, but Hill again raises the bar with his performance as a serious thespian who wears an earring and is sure to point out the obvious character traits of people as if he were thinking critically about everything while at the same time fighting to win Jay’s affection. Robinson does little more than play the guy who try’s to keep the peace, but proudly wears his “Take Yo Panties Off” shirt and “Mr. Robinson” towel at every moment while conspiring with Jay to be a better person once they decide that what is happening is indeed the rapture. While the bulk of the film is based more on these relationships than any kind of story the one who really steals the show (and the characters who typically do) is the antagonist of the group, Danny McBride. McBride has always been a razor sharp wit that pushes the boundaries of vulgarity and filth, but here he takes it to a whole other level. We can tell he loves this concept and that he is playing this kind of version of himself where he can go to extremes and play up that persona those who’ve seen his work in Eastbound & Down or countless other supporting roles have come to think he actually is. It only makes things better that Franco has a vendetta against him and they get to play out these scenarios while making the audience see past their fame into who they really are or might be if the end of the world ever does come around.

That is what makes This is the End so consistently hilarious and so ingenuously smart. Despite the fact these guys could have easily made a 90-minute movie of them making fun of themselves we only get this thrown into an already heavy mix of other elements going on. This is the End doesn’t just deliver what we expect it to, but it also gives us more than we probably ever wanted to know. Still, we take it all in with an energetic glee that is so easy to feed off of from the performances. It doesn’t even end up feeling so much like a regular movie-going experience, but instead a kind of extended hang out session that eventually has to be wrapped up due to the fact that the world is over. I’ve personally always been a big fan of broad, mainstream comedies and though these along with horror movies are usually the easiest targets for critics to crap on this film proves the genre can be both extremely low brow while also containing enough self-awareness, enough wit and knowledge to lampoon the very thing that has made these people so intriguing in the first place: their movie personas. Despite that lack of a clear and defined narrative the backdrop of the apocalypse does provide for some pretty great set-ups and jokes that are too good to give away in a review. That combined with the pure intrigue of an invitation to hang out with these guys for a couple of hours is good enough reason to see the film, that these actors who have essentially played some versions of themselves for years in other movies have finally grown up enough to write and direct a film that pokes fun at that exact statement is a sign that there is hope for the American comedy so many have long declared dead. Would I liked to have seen a few more characters on the screen more? Yea, I think Segel especially deserved more time with these guys though the limited time Cera was onscreen is pure gold and is worth the price of admission alone. The film does lag just the slightest bit around the halfway mark, but the little vignettes we get due to their boredom make up for this lack of coherency completely. It is likely to go down as the funniest American comedy of the year and with good reason as it sports all the qualities of the best Apatow comedies with a little extra raunch thrown in for good measure. The students have officially become the teachers.