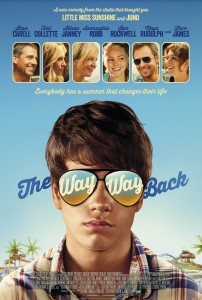 Writers Nat Faxon and Jim Rash who penned The Descendants together in 2011 have teamed up once again to both write and direct their first feature which has come to be known as The Way, Way Back. I was slightly disappointed it’s taken this long for the film to reach my neck of the woods as I’ve heard nothing but great things and completely adored their aforementioned collaboration (The Descendants was my second favorite film of 2011). It isn’t easy to tell early on what the appeal of the film might be. It is slow to start and almost irritating the way in which each character is so adherent to the dominating characteristics given to them by the script. Whether it be Steve Carell’s prickly dirtbag Trent or our protagonist Duncan (Liam James) who not only doesn’t stand up to his moms new boyfriend, but doesn’t seem willing to try and talk or develop relationships with those who have no ulterior motives. He somehow manages to come across several people willing to open up to him and start a conversation, but it’s clear he is simply an awkward kid in his early teenage years reeling from the realization of what a divorce brings with it and is finding it hard to fit in with people who seem to be anything but other objects who will do nothing but eventually let him down as his parents have done. The key to understanding what The Way, Way Back is hoping to achieve is to feel some kind of empathy with Duncan. Like George Clooney’s Matt King in The Descendants Duncan is coming to terms with a kind of tragedy and trying to learn from it, eventually discovering that he’s been missing out on a lot in life and that it’s now time to make up for lost time and go on from this point with a different perspective with hopes of being who he wants to be and not what others necessarily expect from him. It is a classic coming-of-age story we’ve seen countless times before, but seeing as each and every single person goes through this process (to some degree) it is a story we can all latch onto. How well the story is executed is what makes trying to capture nostalgia on screen successful or not and The Way, Way Back just happens to be very well executed.

Complimenting this well worn story is the fact that it takes place during summer. There seems to be no better season for nostalgia than the one where everybody, especially teenagers, are seemingly free yet searching for something to hold onto. We are introduced to Duncan as he sits in the back seat of Trent’s station wagon facing the opposite direction, literally watching the distance between what he’s accustomed to and the unknown get further and further apart. Duncan’s mom, Pam (Toni Colette), and Trent’s daughter, Steph (Zoe Levin), are both asleep as its evident they’ve been on the road for quite some time and Trent begins asking Duncan a series of questions to probe how the awkward teen sees himself. Instead of attempting to do this in subtle way though, the entitled Trent decides he can get Duncan to where he wants him to be by being a bully. This inevitably does more harm than good making Duncan resent Trent not only for trying to take his dads place but by the simple fact he is pretty much a jerk about everything. Once arriving at Trent’s beach house we are immediately introduced to his newly divorced and consistently drunk neighbor Betty (Allison Janney) who also has two children in Susanna (AnnaSophia Robb) the exception to the rule of girls who hang out at the beach in bikini’s who takes an interest in Duncan for more than just the idea they have the pain of dealing with divorced parents in common. There is also Peter (River Alexander) a confident, cross-eyed kid who Betty mercilessly picks on and pawns off on Duncan in hopes that he makes friends past his action figures. Besides Betty, Trent has a small group he typically hangs out with when at the beach that includes Kip (Rob Corddry) and Joan (Amanda Peet). Duncan quickly begins to feel like an unnecessary wheel no matter who he keeps company with. Attempting to escape these confines he stumbles upon a water park straight out of the eighties and is run by stalled adolescent Owen (Sam Rockwell). It is in this dated water wonderland that Duncan finds solace in its quirky features and fellow co-workers, a place he feels comfortable, but more importantly feels like home.

It is in this sprawling cast (and I’ve yet to mention the likes of Maya Rudolph as well as Rash and Faxon themselves) that breathe life into the characterizations that bring an honest portrayal of family dynamics to the screen. It was admittedly odd when first catching the trailer to see Carell playing opposite his persona and giving a nasty turn. Though his time is limited here we recognize his type as soon as the “family-to-be” reach their destination and he begins passively bossing people around while clearly on a constant power trip that gives him a disfigured picture of himself. As Rockwell’s Owen states later in the film, it is his own shortcomings that he angrily projects on Duncan. Colette has become so good at her American accent and at playing these motherly figures that the whole thing feels second nature at this point. The difference between her and another actress playing this role though is that when the film shifts into more dramatic territory she has the chops to bring it and when The Way, Way Back hits that emotional high point it is her character we watch to see who she really is when life puts a challenge in front of her. The script asks her to be passive and typical until a defining moment and Colette handles it with pleasure, demonstrating why she can be as much a character actor as she is diverse in starring roles such as Tara Gregson. The real scene-stealers here though are Janney and Rockwell. Each of them sling their comedic dialogue with no holds barred, delivering it perfectly in tune with the emotional core of what stage their characters are at in their lives. Both have issues, Janney’s Betty is attempting to continue routine after it’s already been broken by her divorce and Rockwell’s Owen is resisting growing up; hoping the longer he holds on to the nostalgia of the water park the longer he can continue to feel like a teenager. The truth hits him in the winter and he is clearly intelligent enough and has plenty of perspective to realize he can’t capture what made those summers so memorable for much longer without becoming anything more than sad. He sees his future in Caitlin (Rudolph) who manages the park along with him and through helping Duncan in his struggle for normalcy he comes to realize what he needs to do to make his current days just as meaningful as the good old days.

What I enjoyed most about the film though was how its story didn’t ever resort to its conventions to pass the time. This and it never strayed too far from its focal point, only showing enough of the supporting characters to inform the feelings and decisions of our main character. As I said in the beginning, Duncan at first comes off as slightly irritating, not willing to give anyone a chance at breaking his sulking mood. Fortunately, the movie gets going just in time to avoid criticisms of slow pacing and gives Duncan more to do than be sad. Not only is it when he scores the job at Water Whizz, but as he begins to develop a relationship with Susanna. This aspect was the one that I was afraid might feel the most contrived. The whole girl next door thing has been done to death and that she might be the perfect match for our hero makes it all the more cliche, but the timid and genuine chemistry between Robb and James make it work. They aren’t immediately forced into an awkward situation as much as she needs someone to have a real conversation with (I mean, she reads books while the other girls read magazines! Hello!) and he is so scared that if he talks too long he’s going to mess up so in turn he keeps it short and she becomes all the more intrigued. James, who hasn’t had a major film role and definitely not a leading role like this before now, gives Duncan a believable arc as he transforms from the introverted teen we meet in the opening moments to the more assertive young man we get by the time the credits begin to roll. It is hard to see the performance when it seems the actor might be very similar to his character, but there are certainly choices going on here that might not have been made and highlights that might not have come through did James not have some real talent in being able to convey actual human emotion in front of the camera. The Way, Way Back won’t win any awards and it may only leave as much of an impact as it did during the summer months, but ultimately it is a truly heartwarming tale that is as authentic and bittersweet as it is unoriginal and predictable. A testament to the fact it’s not the destination, but the journey that matters.