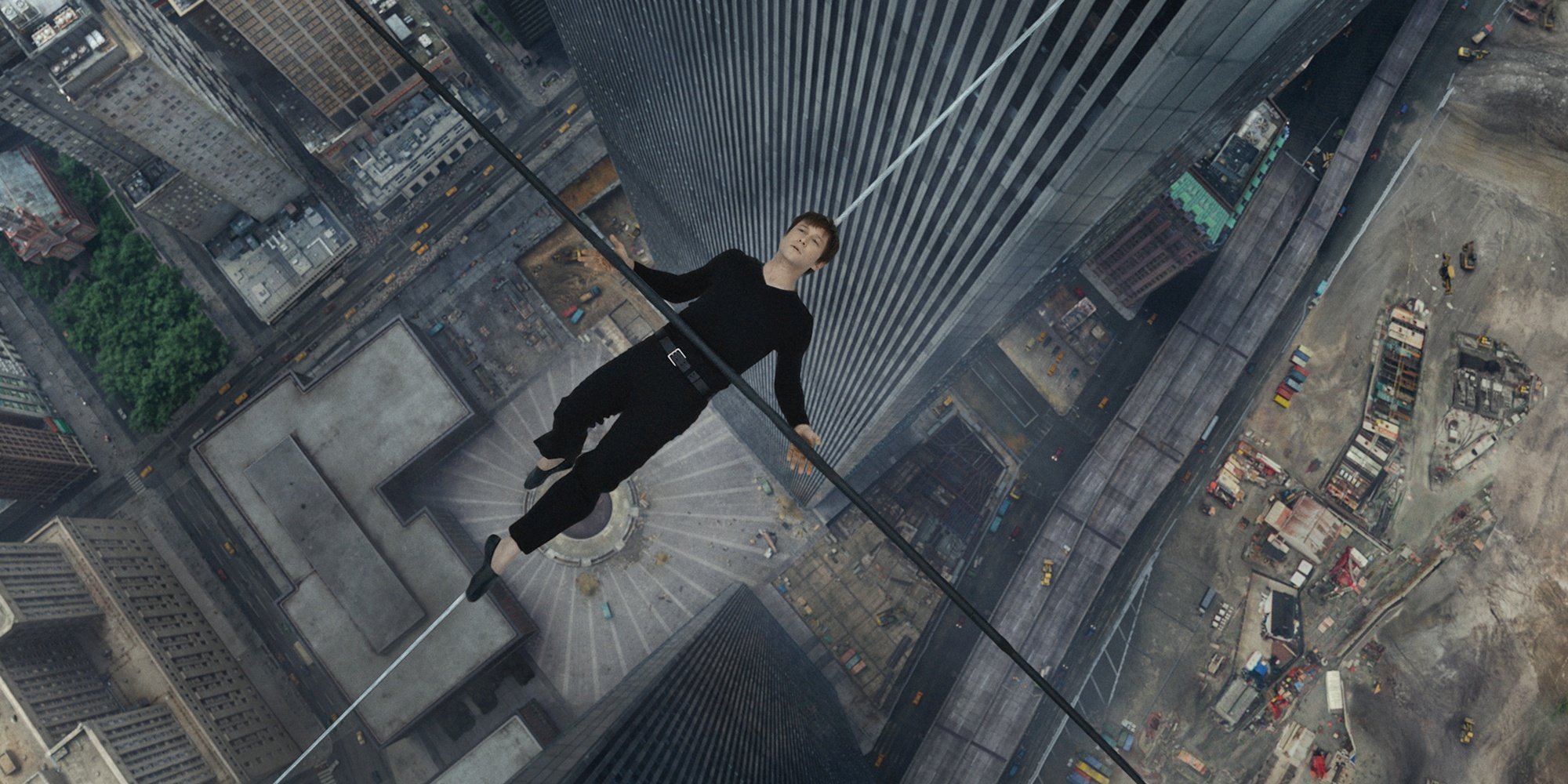 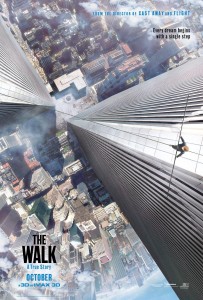 Man on Wire is the Academy Award winning documentary from 2008 that preceded this dramatization of French high-wire artist Philippe Petit’s walk between the Twin Towers of the World Trade Center on August 7, 1974. What made the documentary such a critical success and one of the more all-around entertaining documentaries ever made was largely due to two factors-1) Petit himself and 2) the heist-like nature required to pull the stunt off.  Petit is a character who needs no exaggeration. To watch him describe his mentality and desires in the documentary was to paint so vivid a picture that re-enactments were never needed. There was also a surplus of photos and footage from around Petit and his accomplices planning and executing this rather risky gamble to fulfill one man’s crazy dream that filled in the gaps when Petit wasn’t acting out his recollections. So, the question is why would anyone want and more importantly why does anyone need another version of a story that has already been told in a magnificent (and no doubt more honest) way? The documentary was filled with drama and tension so why dramatize it further only to restrict it to a narrative structure that would likely end up making the distressing story rather passionless. There seems to be no definitive answer as to why this new interpretation was necessary within director Robert Zemeckis’ film, but strangely it seems to make perfect sense given the man behind this particular vision. Zemeckis has always been a filmmaker who likes to push the envelope when it comes to technology and trying things other filmmakers wouldn’t dare attempt (see Who Framed Roger Rabbit, Cast Away, The Polar Express). In Petit’s story the director has found an inherently dramatic, fun and literally breathtaking tale that perfectly accommodates the type of innovative filmmaking methods he likes to march out and test on his audiences. And so, while The Walkmay not be a movie we all needed, that certainly doesn’t make it one worth ignoring. In fact, it’s rather invigorating once it gets going.

If you’re not familiar with Man on Wire it’s hard to recommend you see it before seeing The Walk given you’ll more or less be watching the same movie consecutively. Of course, this new version of the film is a more linear story that features a pure dramatization of the events that are mostly talked about in the documentary, but still, you get the same basic story with the same highs and lows. With a widely loved documentary already out I’m sure this gave Zemeckis and his co-screenwriter Christopher Browne a limited feeling on what they could change, condense and add. The two do an admirable job of breaking Petit’s story down into the three essential acts that give us the original inspiration of the main character (played here by Joseph Gordon-Levitt), the setting of the objective and then (in the final hour) the full execution of the act that will define our characters life. Giving us more insight into what guided Petit into wire walking in the first place than Man on Wire, The Walk introduces us to Petit’s real-life mentor, Papa Rudy (Ben Kingsley) who was a popular circus performer in France. The Walkalso gives stronger reason to believe in Petit and Annie’s (Charlotte Le Bon) relationship. The two are given their due as a couple, but their story never takes over the main narrative as this is not a story about a boy and a girl, but more a boy and his wire. There was no way around it, but I was happy to see the film stick to the same outcome concerning these two as what real life held for them. It is in a dentist office one day as he’s waiting to be called that Petit sees a picture of what will eventually be the Twin Towers in New York City. He immediately sets this goal of hanging his wire between them as his ultimate coup. Aided by an unlikely band of international recruits that include Jean-Louis (Clément Sibony), Jeff (César Domboy), Barry Greenhouse (Steve Valentine), Jean-Pierre or J.P. (James Badge Dale) as well as Albert (Ben Schwartz) and David (Benedict Samuel) Petit overcomes insurmountable odds to conceive and execute his mad plan.

For the first hour or so of the film we receive the aforementioned backstory that allows for Kingsley, Le Bon and Gordon-Levitt to provide the groundwork of these characters as well as reinforcing what makes Petit so hellbent on going where no man has gone before (and never will again). We are treated to the standard scenes of Petit’s parents not approving of his lifestyle and career choices, the meet-cute between he and Annie as well as the love/hate relationship he shares with Papa Rudy throughout. As the other extraneous characters begin to be introduced (Jean-Louis and Jeff being the initial inductees) there is a shift in the tone that allows the ambition of Petit to go from just that to something of an actual plan. How Petit and his accomplices afford plane tickets back and forth from Paris to New York or the no doubt expensive equipment it actually takes to pull off a stunt like this are never addressed, though Petit apparently has enough money to pay Rudy to show him how to tie a correct knot (which eventually comes back around to try and cover the bases, but doesn’t really). These are all minor complaints though as The Walk clearly has one, decisive goal and that is to provide the audience with a thrilling adventure, the likes of which we need to see on the big screen to really appreciate. It is not so much that this first half of the film is filler, but that it all feels rather inconsequential when we see what follows it. There is a scene where J.P.’s character is introduced and we think we will get to know him as well as Albert and David, whom he recruits, a little more before we finally reach the point we’ve all been waiting for, but the very next scene jumps to August 6th, the day before Petit is set to do his walk. It is somewhat jolting to understand that this quickly a plan has been put in motion, but Zemeckis clearly was intent on giving the actual stunt it’s due. The director even allows for Petit to recount the plan without cutting to the characters going through with the actions as we expect, but rather lays it all out for us and then shows it to us in all it’s blood, sweat and tear-laden glory.

The genius of the film lies in the small moments that occur as Petit and his crew ascend the tower and encounter countless close calls that almost render his dreams impossible. With the type of dedication to the daring risks it took to pull something of this caliber off the film automatically takes on the same heist-like qualities of the documentary. Going through the carefully plotted steps also, without trying too hard, brings out the ideas and motivations behind why so many people would risk their own safety and livelihood to make one man’s desire a reality. Each of them know that what Petit is attempting to do is crazy and somewhat reckless, but to be a part of something that has never been done before is an exhilarating high some just can’t turn down. In this case, it would mean to become a part of history and thus, well worth all the risk and trouble they might encounter. The risks of what might happen if Petit doesn’t succeed in walking his wire are never really taken into consideration given most will know he completes his walk successfully, but this is something of the charm of the piece as well. Zemeckis makes no endeavor to dig deep into the crevices of Petit’s brain to figure out what makes him tick, but rather only gives us our protagonist’s thoughts by having Gordon-Levitt perform a cheesy and somewhat odd narration that places him on the Statue of Liberty with the Twin Towers always shimmering in the background. With what he has to work with, Gordon-Levitt does fine, but it would have been nice to see more of Dale’s J.P. who really becomes the face of the operation in allowing his natural charisma to get the team through more than a few tough spots as well as Valentine’s Barry who is immediately appealing. A little less of Samuel’s David wouldn’t have hurt either.

Regardless of all these facets, The Walk remains a rousing thrill ride that really capitalizes on the IMAX and 3D aspects of its production. My stomach was churning as Petit put on his costume and prepped himself for that first step onto the wire. There is a moment just as Petit steps out that the music drops out and the silence of birds in the distance is all that’s left to engulf us. Unfortunately, this tactic isn’t used for long, but it really makes this single moment as effective as it could be. While I would have preferred that Zemeckis use minimal music rather than the sweeping score that comes blazing in his use of “Fur Elise,” is a nice touch as it emphasizes the lightness of Petit’s tiptoes on the wire. It seemed unlikely that Zemeckis’ film would be able to match the acclaim or even what made the documentary so fascinating and that’s not even taking into consideration the feeling The Walkwas unnecessary, but given we have so few films these days that truly embrace the qualities of big-screen cinema, this film is something of a rare opportunity to viscerally experience the feeling of what our characters are going through. Given it’s rated PG-rated it’s also that rare movie everyone can see and anyone could love. There is something of an event quality to the experience while also serving as a love letter to New York City that will make each and every audience member feel all the more united and ready to cheer.