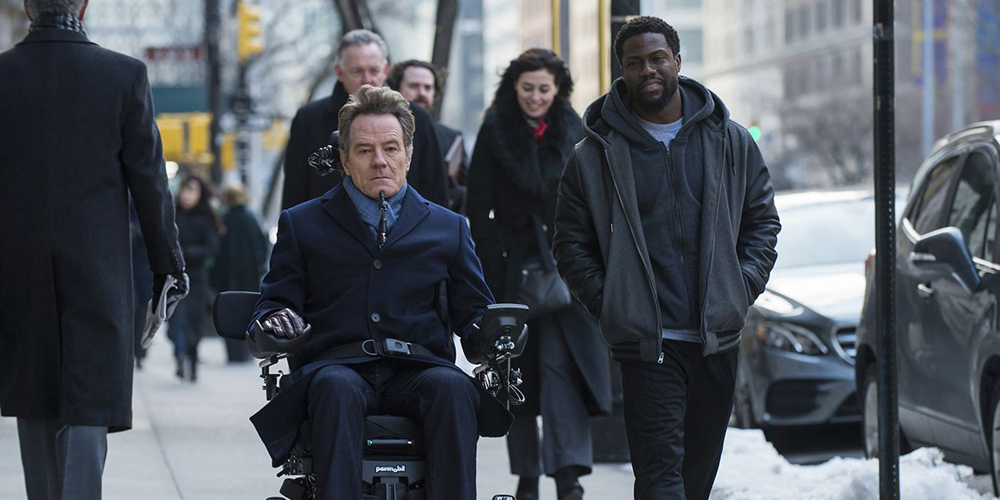 Charming is the key word here. You will be charmed. The Upside is charming. Charmed in the sense not that The Upside will put you under a spell necessarily, but more in the sense of it being a pure pleasure; a delight, if you will. Many a foreign films are re-tooled into American stories so as to make the context more familiar and the circumstances more relatable/understandable, but oddly enough the 2011 French film, The Intouchables, might be the last foreign film to come to mind when considering what would benefit from a re-contextualization as it, by virtue of its broad and rather simple odd-couple premise, feels the least foreign in terms of beats and emotions relayed. Still, for one reason or another it was deemed a big enough hit overseas and therefore must have been doing enough right to make a stateside studio want to re-make it once more (it has already been re-made in India as well as having a Spanish-language re-make to boot) and so why not hire the likes of Walter White and the most reliable comic actor of the moment to bring it to a wider, English-speaking audience? Thus, The Upside was born and first premiered on the festival circuit back in the fall of 2017, but was shelved and sold off following the Harvey Weinstein sexual abuse allegations. Eventually bought by STX Entertainment, the studio is either hoping people overlook the time of year in which they are dumping this into theaters and simply trust the inspired pairing of Bryan Cranston and Kevin Hart or they are just trying to unload what is sure to make some money, but what they ultimately realize was always an unnecessary piece of cinema. And yet, unnecessary as it may be, the inspired pairing of Cranston and Hart is what makes director Neil Burger’s (Limitless, The Illusionist) re-make of the film a film with genuine heart and even a little insightful substance from time to time rather than that of a film completely devoid of any charm or wit that exists solely as an opportunity to replicate a previous winning formula. The Upside is certainly formula and it goes without saying any seasoned movie-goer will know to expect every beat this hits, but that doesn’t mean it’s neither appealing nor endearing as it strokes its familiar elements to the point it is these charming qualities that stand out most.

So, in this third re-make based on the true story of the life of Philippe Pozzo di Borgo follows a paralyzed billionaire, Philip Lacasse (Cranston), who strikes up an unlikely friendship with a recently paroled convict, Dell Scott (Hart), whom he hires to take care of him. Naturally, things don’t begin this way as Lacasse, who has lost all ability to move from the neck down due to a paragliding accident, has seemingly suffered what is a far greater loss in the death of his wife. As a result, and despite his business manager, Yvonne (Nicole Kidman), doing all she can to double as his personal assistant, Lacasse simply has no drive to live any longer. As Lacasse, Cranston plays the guy with a hard emphasis on the “Do Not Resuscitate (DNR)” code and partly hires Scott due to his inexperience and the fact he’ll undoubtedly mess up bad enough he’ll end up inadvertently killing him. Kidman’s Yvonne clearly has feelings for her boss in that there is a genuine care for him present (though it should be noted Kidman is completely wasted and her character arc forced), but she also knows what he’s up to when he hires Scott who-it’s worth mentioning-stumbled into the interview by accident-and wasn’t one of the many qualified candidates Yvonne likely spent too much time screening before inviting them for face to face interviews. Scott is simply looking for signatures to turn into his parole officer to prove he is actively looking for a job, but it’s clear the man couldn’t be less enthusiastic about actually having to work. Scott has an ex-wife (Aja Naomi King) and a pre-teen son, Anthony (Jahi Di’Allo Winston), that he owes untold amounts of child support to. To be fair, there is a desire present within Scott to mend the relationship if not with his ex, at least with his son and a desire to be a part of his son’s life, but for all the drive and natural intelligence Scott displays he matches it with ten times the amount of laziness. Of course, when Scott learns Lacasse has some real money behind him and is more or less called out as a failure by Yvonne before he’s even given a real shot something both sparks him to prove her wrong and, of course, to make that money. 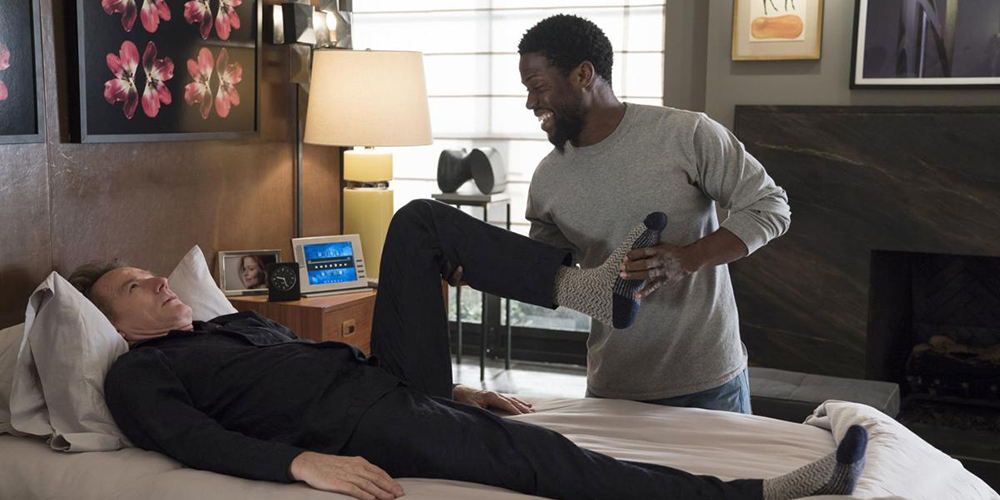 Now, it’s hard not to see the tropes already forming as regardless of their backgrounds what matters most in this movie is of course that these characters take life lessons in racial harmony from one another to both discover who they truly are and to better themselves simultaneously. It’s one of those age-old tales of balance where the stiff, upper-crust white man is taught how to let himself go and that there is more to life than having wealth by the good-natured black man who society has forced to stay quiet all these years, but would you look at that-might have something valuable to contribute when given the chance. It’s a trope that’s almost the same as the “white savior” cliché, but is only self-serving to the underdog character in regards to taking advantage of an opportunity that wouldn’t otherwise have presented itself. Any way one chooses to look at it though, it’s a cliché and one that I imagine can be uncomfortable for a black person to watch given these movies where black people are hired in a subservient role are over and over again utilized to bring more enlightenment to the given situation, but are more times than not played as something of an unexpected twist. Like, why so surprised?

Needless to say, The Upside could have certainly gone in this direction if it so desired, but what stands the film apart-and this is certainly due more to Olivier Nakache and Éric Toledano’s original screenplay than Jon Hartmere’s adaptation I imagine-is the fact the script keeps both characters at enough of an unlikable difference that they balance one another out. Kevin Hart plays to certain stereotypes, but so does Bryan Cranston; they both learn to deal in their shortcomings, they both come to realize they’re stronger, more capable, more intelligent, blah blah blah…whatever the case may be. The film enters this realm of routine through its back and forth of one man learning a lesson from being around the other, applying it to his personal life, and then the counterpart doing the same thing until they come to this mutual understanding that despite their obvious differences…they’re actually pretty good for one another. It’s a system of storytelling that has proved successful time and time again and it will continue to be recycled over and over long after this third re-make of an oft-forgotten French movie is also forgotten, but it’s used so often because it makes the audience automatically feel better about humanity. When such formulas are brewed effectively though, they make the audience want to feel better about themselves and to its credit-The Upside accomplishes this more than it doesn’t. 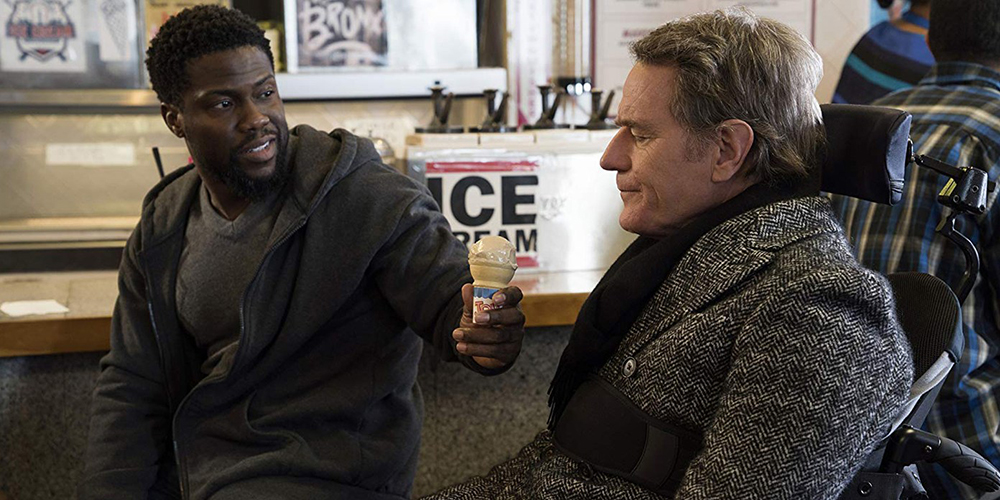 In fact, The Upside falls somewhere in the middle if we’re measuring how effective it is in executing said tropes and archetypes. It is humbling because while we aren’t meant to immediately like either of these characters it’s not hard to appreciate why they feel the way they do coming from the circumstances laid out for the viewer. Further, it is the performances and camaraderie of Hart and Cranston that elevates the material from formulaic to that aforementioned quality of endearing. Hart is able to garner enough of the spotlight early on that the script and Burger are able to allow him ample opportunity to flex his chops as an actual actor while dropping in the expected bits of humor that are standard with any movie Hart appears. I’m not saying it’s necessary, but maybe one day Hart will make a film where he doesn’t allow himself the reliance on his sense of humor to free him from a scene or scenario that is otherwise meant to carry real weight, but for now-The Upside is a nice step in a more interesting direction as the comedian does deal in a handful of heavier moments than we have been conditioned to see him perform and handles them with a rawness that is fresh and kind of invigorating.

Cranston is of course known for his more dramatic work though, and serves as a good foil for Hart as he plays along in the “guess what crazy thing the funny guy might do next,” game taking Lacasse through the necessary arc of depressed, on the mend, spiraling back downward, and then of course through to a redemption into peace and tranquility where all he was searching for in life is revealed to him as he simultaneously improves the quality of life for those around him either through his money or newfound perspective and company. This may sound rather dismissive, but it’s not because Cranston is giving a bad performance it’s just because this is the kind of performance the man could give in his sleep. The lone exception is a scene between him and Julianna Margulies where the two are left alone and some small, inescapable truths are captured and therefore a sense of raw (there’s that word again) honesty is generated. These moments feel rare because the majority of the film does adhere to this manufactured sense of familiar story beats, so when it breaks from the norm to get real about the circumstances each of these men are facing and the characters themselves are then forced to confront these realities as well, they really land. It also helps that Burger and cinematographer Stuart Dryburgh lend the film a tangibility through both its contrasting environments and the style of the movements the camera makes depending on which environment we’re in. The Upside makes it clear things aren’t always pretty even when life sends us through a comedy and/or tragedy of errors, but that what makes the difference is which way you care to categorize it and how you choose to take away the life lessons it intends to teach you; lucky for most of us, The Upside decides to interpret these in a mostly-say it with me-charming way.