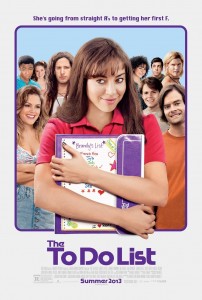 Walking into something like The To Do List it is hard to decide whether or not you are going to get a film along the lines ofAdventureland or something more akin to an Adam Sandler comedy, but the cast would certainly suggest the former. That was my optimistic hope going into the film and while I never expected this to be the comedy of the summer (the film was originally scheduled to come out this past February) or even a kind of cult hit I did expect to find a rather low key dirty comedy with enough good bits to sustain its brisk running time. What we actually get is a great cast littered throughout a flimsy film that knows what it wants to be and has a clear agenda, but doesn’t necessarily have the intelligence or originality to achieve its own aspirations. As this fact became clear within the first fifteen minutes of the film I was at least relieved to see so many funny people and even rather credible actors popping up in roles of all shapes and sizes whether it was cameos, supporting players, or main cast. As films such as this usually go there isn’t enough substance or depth to the characters to justify the emotional journey the makers would like us to go on, but as far as staging crude and vulgar sex acts in awkward places between awkward people this movie hits the nail on the head. The title of “sex comedy” is a term tossed around loosely these days and used to describe pretty much any R-rated comedy that includes at least one boob joke, but The To Do List earns this branding with its head held high. I don’t know if it was the fact I wasn’t sure what to expect from the film or that it was so unabashedly blunt about its sexual awareness but the film is ultimately a mixed bag ranging from amusing sight gags to jokes as old as the time period in which it’s set (sadly, this means 1993 was twenty years ago). While Aubrey Plaza has become known for playing the witty and extremely deadpan chick in films like last years Safety Not Guaranteed and TV’s Parks & Recreation the actress takes small steps here to separate herself from that persona which should count for something, but ends up meaning very little when the project surrounding you really isn’t that good.

Written and directed by Maggie Carey this feature debut is filled with amateur moments that feel extremely rough and unfinished. I don’t know if this type of style is intentional, but the fact I can’t tell will force me to go ahead and attribute it to the fact this was all done as a kind of on the fly style, improvised fashion that instead of emphasizing a sense of fun and randomness makes the whole project feel more lazy than anything else. Still, there is a strange sense of pride that comes with this brand of humor as it seems Carey isn’t attempting to necessarily make a strong case for sophisticated women, but is instead pointing out that even the most self-respective women can be as dirty as they want to be. Carey paints this picture of a young and intelligent woman through Brandy Clark (Plaza), a recent high school graduate and the valedictorian who has a very type A personality and is somewhat of a prude that approaches losing her virginity as she would a homework assignment. It is a rather funny concept and on paper probably made a lot more sense and was able to turn a laugh much easier than the final product is able to realize. When Brandy’s friends, played by the hilarious Alia Shawkat (Arrested Development) and Sarah Steele (Spanglish), decide to take her to a graduation party with alcohol and popular people rather than the church lock-in she is introduced to that first piece of infatuation embodied by the immaculate Rusty Waters (Scott Porter who was surprisingly good in 10 Years). It is at this moment Brandy decides she must lose her virginity to Rusty before the summer is up so she will be as well prepared for the college experience as she possibly can be. This all stems from the fact Brandy is a control freak, an obsessive perfectionist who sees everything as some kind of competition and her trapper keeper is the source of all organization. This leads her to naturally make a list of all the sexual experiences she has yet to try (which is everything) and commits herself to completing the list before the end of summer comes. As Brandy is extremely good at homework you can imagine how this goes.

The story does include a cavalcade of different characters with a cast that is more than game and helps sell everything this movie is trying to throw out, and the movie is throwing out a lot. It is actually kind of endearing how far the film is willing to go and how shamelessly it trots out sex joke after vulgar sex joke. Most of them are jokes we’ve seen before and can see coming from a mile away, but every now and then we get a scene so ridiculous and so obscene we can’t believe they actually went that far which makes it almost impossible not to laugh. Most of these instances can be drawn from the scenes that Plaza and Johnny Simmons share together. Simmons is an interesting case because he’s served as supporting if not almost background characters for so long it is odd to see him playing the lead male role vying for our protagonists heart. He and Christopher Mintz-Plasse share a few scenes away from the women they are trying so hard to impress that elicit Carey’s intention to show boys dealing with relationship issues and desires for certain women the same way girls obsess over the small things in building up to something as simple as asking someone out on a date. It is these small facets of the script as well as the constant banging over our heads of 90’s references that had me at least chuckling the majority of the time. There is no particular reason the film needed to be set in 1993 except for maybe as an excuse to use a soundtrack full of that decades hits, but we get about ten references a minute to the time before the internet dominated everything; when people still used VHS tapes and had to call each other on land lines and catch them at their house to make plans. I found most of this to be entertaining, but the ongoing gag does grow tiring and the audience is made more aware that the aspirations the makers of the film hold for this project are not going to be met. This is a shame really, as there is a clear frankness with which the film approaches its topic, but it isn’t able to convey its sexual empowerment subtext because its buried under so much sophomoric humor.

When it rises above these instances and gives the audience some genuine laughs it is mostly due to the game cast that I mentioned earlier. Most of all we should mention the always wonderful Bill Hader who, as he’s done in Superbad, Hot Rod, and the aforementioned Adventureland, brings an unexpected layer of hilarity in a character that could have just as easily been tossed aside and played by anyone. Here Hader is required to play the community pool manager who doesn’t know how to swim and has only enabled himself from going nowhere in life by slacking at what little responsibility he already has. It is when he is brought together with Brandy’s equally unambitious sister Amber played by Rachel Bilson that one of the best gags and a few of the best lines are delivered. Bilson really surprised me here as the only thing I’ve ever seen her as is Summer fromThe O.C. and as she was nothing like that character here, but older and more willing to do anything for the joke her casual tone when talking to her sister about things she clearly has no idea about and the self-praise she conjures up for herself when reminiscing about her own college days captures just the right amount of sibling dynamics and individual characteristics. Andy Samberg and Donald Glover also show up in bit parts that don’t amount to anything more than cameos while Brandy’s parents as played by Clark Gregg and Connie Britton have their own characters arcs they have to deal with and is one of the more entertaining aspects the entire film. Gregg is the oblivious yet generic father while Britton’s mother figure knows her daughters are way past and entering their sexual journeys and represents that frankness with which Carey means for her entire film to handle its subject matter. The To Do List isn’t an awful film, but it can get pretty nasty and certainly isn’t something I’d drag my parents to. Above all of that though it simply isn’t as funny as it should be given its attitude towards sex and the cast it’s assembled to make things happen. It could have easily been a better comedy about juveniles made by adults, but is instead a juvenile film made by juveniles.