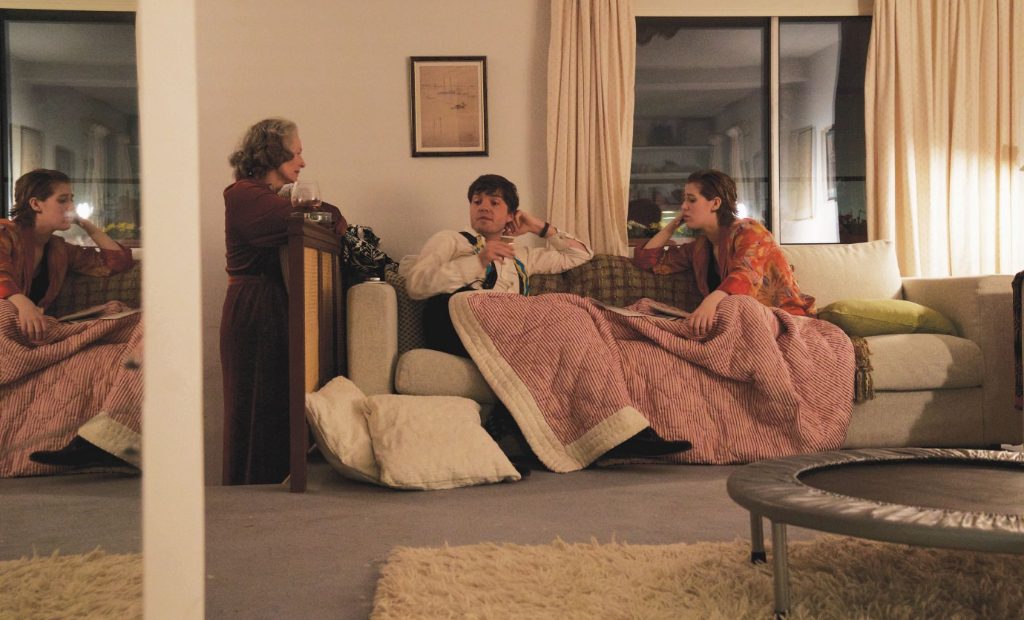 What a disadvantage it is, to be a well-bred girl of means. Pale-skinned and unassuming, longing to somehow matter, yet so easily compliant, not daring to demur. Julie, played by Honor Swinton Byrne, lives in Knightsbridge, in her parents’ posh-shabby pied-à-terre. She doesn’t quite fit the picture. She is a bit boyish, and she has dreams – she goes to film school and wants to create stories about social justice, set in Sunderland. But it’s the early 1980s – things are different. London is quiet in a way that is now impossible to imagine, and her tutors, aware of her privileged social background, do not take her seriously. They think she hasn’t yet lived and that she is still unequipped for life, and even less to make films that matter.

When Julie’s temporary lodgers move out, having ever so slightly taken advantage of her hospitality, a young man steps in, gradually taking over her life. Is she attracted to him? There is no way of knowing. Julie lives quietly, within her own interior life. Anthony – Tom Burke – is older than Julie, and imposes on her with calm superiority. When she tries to talk to him about her film projects, he tells her, with a certain finality, that he likes Powell and Pressburger.

Anthony works at the Foreign Office and has been to Afghanistan. He is also caring. He cooks, and wears an apron in the kitchen, in a manly, efficient sort of way. The couple are of the same class, but Anthony bears its symbols more ostentatiously. He wears velvet embroidered slippers, owns monogrammed leather luggage, keeps his pin-striped suit jacket on at home. He has unexplained absences, presumably related to his secretive job. And then, at a dinner party, Anthony’s stylish and blasé filmmaker friend – in a brilliantly executed cameo by Richard Ayoade – drops a bombshell. Julie quietly absorbs the shockwaves and stays on course, though nothing now will be the same.

Though she is in her early twenties, she is far from being an adult – a woman – and this too, makes her relationship with Anthony disquieting. When she wears lingerie Anthony has brought as a present, it looks incongruous. When they go out and drink champagne in grand rooms, they appear joyless, living on a narrow emotional bandwidth.

The Wallace Collection in Marylebone plays an important part in their romance. Early in their courtship, Anthony gives Julie a postcard of a Fragonard painting, called The Souvenir. It features a young woman carving initials on a tree trunk – a young woman known as Julie. And later on, well, the Wallace has again a part to play.

Joanna Hogg’s film seems extraordinarily oblique and almost deliberately artless. This is in good part because the story is told from Julie’s perspective. At this stage in her life, she is still clueless, emotionally embryonic. She has been educated to not complain and not explain, and does not seem to be curious about the world. When she hears a massive explosion nearby – something that really did happen, in 1983 – she briefly looks out of the window and then disappears to do something else. And Hogg’s direction, her cinematic language, seems to follow that same logic. The camera does not dance around, does not enquire. It plants itself and observes, then moves on. What it observes is a young woman in a bubble, quietly absorbed with a man hermetically sealed in his own world. He has his addictions, and meanwhile he is her addiction. Can she live past this? Perhaps.

A sequel has already been announced, and at the film’s Berlinale 2019 press conference, Tilda Swinton, who plays Julie’s mother in the film and is Honor Swinton Byrne’s mother in real life, was categorical that her daughter does not intend to follow an acting career beyond this – The Souvenir is to be a one-off. Let us see.