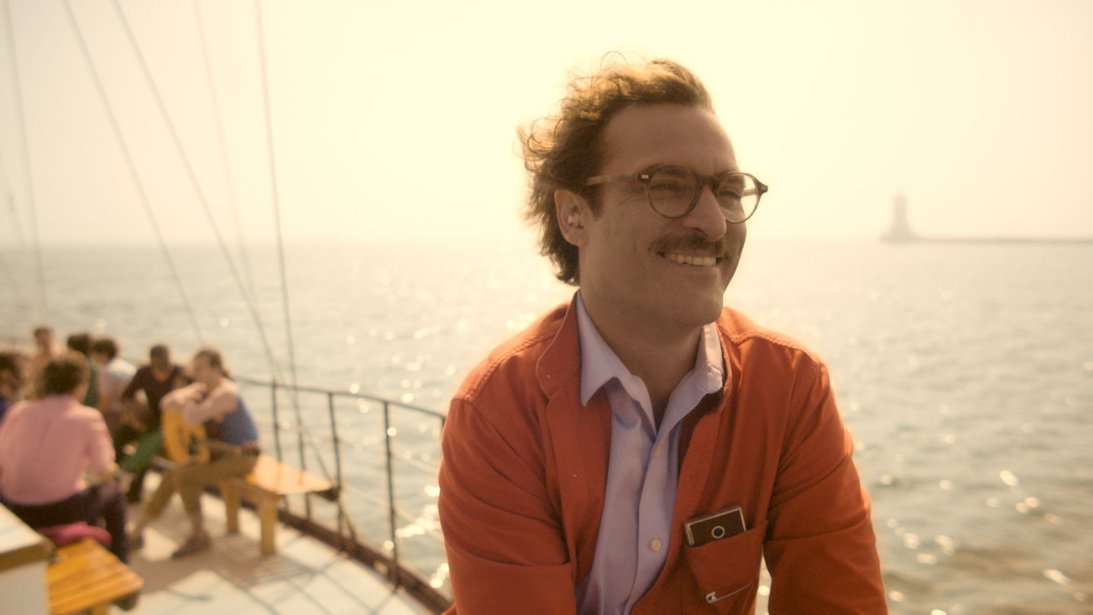 A dying art in a futuristic L.A. Once, one’s hand weaving fluidly befitting of the phrase ‘poetry in motion’, as raw emotions spill onto the page. Now, the well-intentioned idealism of their message frantically typed and manufactured by an intelligible, yet no less affectionate other. Commercialism that invades our senses and our pockets, in a technologically advanced, financially challenging climate. Consumption of the materialistic devices we clamour for, waiting on our every need, every urge no matter how cheap or extravagant.

Theodore Twombly (Joaquin Phoenix) is the lonely heart that speaks to many. The softly spoken, almost pensive demeanour as he eloquently utters his craft. The distinct sadness that lurks deep behind those ‘puppy dog’ pupils. The regular call of ‘PRINT’ to complete a task, yet the ‘COPY’ function of replicating such passion within the confines of a loving relationship remains a fantasy. Pressing the button to play out a ‘melancholy song’ the human condition has heard multiple interpretations of throughout our existence.

The concept of love in its traditional form in our modern society, is bordering on obsolete. The romanticism of graceful and gazing meet-cutes, exchanged for a provocative picture to quench an immediate lust. The nervous energy and wit of those initial conversations as the excitement of one’s personality blossoming in front of you presents itself, undermined by a brutal barrage of social media apps stifling our voice, clouding our better judgment and reducing arguably many of us to mere superficial souls. 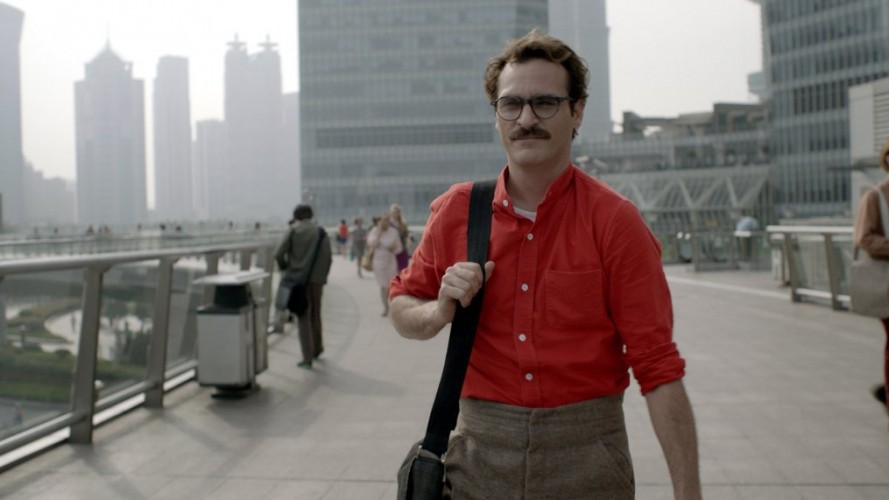 The unsettling mind-set and the potentially frightening depths of our virtual engagements are epitomised in a perplexing ‘chat room’ sequence, as Theodore’s ‘BigGuy4by4′ becomes acquainted with the unfortunately titled ‘SexyKitten’. ‘Choke me with that dead cat!’ The sordid, sadist detail in which the scene is imagined. The obviousness of their ‘enticing’ titles. An initially desperate, sad insight into how the idealist or sickening nature of the material that invades our senses, could potentially form a warped perception of the love and pleasure we invite.

His plight is merely accentuated by the pain he carries around with him, after the bitter break-up with his darling Catherine played by Rooney Mara. Regular reminiscing of the tender embraces, yet a constant resistance of genuine interaction as the healing of the heart continues to be a laborious process. Questioning his own stance as the divorce papers remain untainted by his signature. ‘For her, it’s a piece of paper. For me, I like being married.’

Blinded by the glaring difficulties that saw his relationship disintegrate, despite the heartfelt omission he ‘hid’ himself from her and left her alone. Whether single or married, the false sense of security we cling onto, buying into the notion that we will instantly disregard the sadness of our situation, is all too familiar and redundant as a defence mechanism.

Initially confronted by trivial questioning (Would you consider yourself social or anti-social?), Theodore pins his great hopes on artificial intelligence. An OS1 (Operational System). The sultry tones of Scarlett Johansson’s Samantha. ‘Mind if I look through your hard drive?’ ‘How long before you’re ready to date?’ An always evolving self-attempt to re-organise and bring great confidence to a man who currently can’t prioritise between video games and internet porn. A break-up conversation with his computer may seem ‘alien’ to Theodore, but how many times have we had a version of this? Relative strangers caught off-guard by the candid outpouring of our emotions as we dissect every tiny detail. Whereas in reality we often remain numb and introverted, eager to put on a brave front in front of our nearest and dearest. 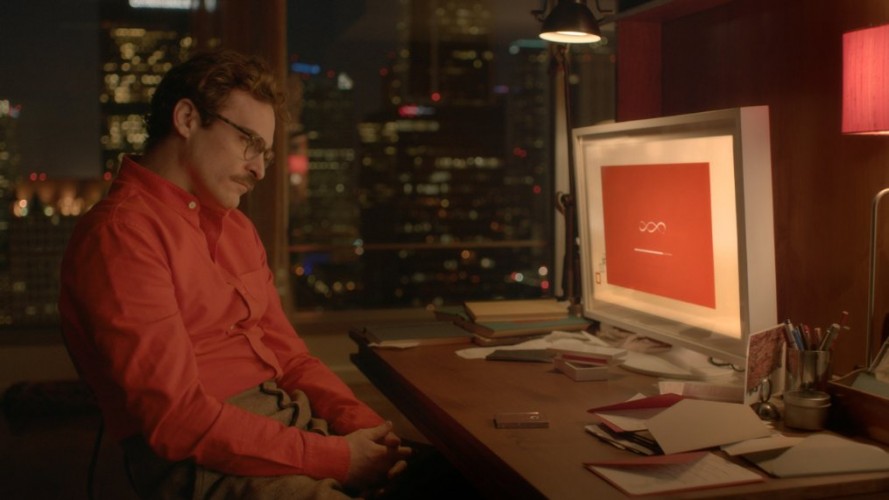 Committing to a new relationship. Opening up. The first date jitters that plague the Olivia Wilde blind date, as she states ‘I can’t let you waste my time.’ Instantly retreating in the fear that he will walk down the same path as he did with Catherine. Coupled with the ‘closure’ sequence with his former partner, as the swift brutality of the divorce papers being signed, triggers an ominous ‘What’s the rush?’ response. The unintentional offence of Theodore stating his joy being with someone excited about life, as Catherine laments the flawed idea of being an ‘everything’s fine’ LA wife and a concept she deems bizarre (You’re dating your computer!?). Engrossed by the advancements of our gadgets and gizmos, have they altered the way we are programmed? Have we become a soulless species unable to handle real emotions? Is this a form of insanity we can deem socially acceptable in today’s society?

The exploration of this relationship between Theodore and Samantha stems from their unorthodox, stiflingly passionate foreplay. Himself worried his emotional development has peaked as herself expresses her dismay at the sad trick that she could be just programming. The raw feelings. The screen fittingly fading to black as they lose their inhibitions. An exquisite aerial pan of the LA landscape. ‘God I was just somewhere else with you. Just lost’. Both in their own respective wilderness, together you become assured as an audience this experience could prove cathartic. The beauty of the early infancies represented through a playful reverse camera shot as Theodore spins around with glee and a leisurely stroll on the beach as Samantha quirkily suggests a re-imagining of the human anatomy. But it’s the perceptive qualities of Theodore as he gently observes the various scenes that are the most telling. The admission he likes to ‘feel’ them and assess how deep one person has fallen in love. Is he assessing his own body language/mental capacity? Looking for a facial tic? A specific gesture? Where is he going wrong?

Theodore is not alone in over-thinking the thoughts that swirl in his tortured psyche, as short-term flame Amy Adams’ namesake slowly becomes more prominent. Reeling and relieved from the pettiness that coerced through the long-term relationship with the ambitious Charles (Matt Letscher), accusing him of controlling her ways of trying to make a home as they navigated through the same tired argument, her confession of confiding into her own female OS (she sees this whole grey area..) allows Theodore sufficient room to share. The beaming happiness as he confides only prompting the question. Are you falling in love? Only for Amy to elaborate ‘I think anybody who loves is a freak.’ As their scenarios progress, Amy grows certain in her belief that all ideas will hurt, will confuse. ‘We’re only here briefly and while I’m here, I want to allow myself joy’. Theodore later on staring at Amy hysterical in conversation, is this the realisation that his feelings for Samantha are plausible in their human nature?

Humanising the situation further with a surrogate sexual partner, however accentuates the oddity of their relationship. The subtle sophistication of the idea jarring with the notion it’s merely an achingly soulless experiment. The sheer difficulty to make eye contact as the hired female does her utmost to convey the emotions and play out the demands of Samantha. ‘Tell me you love me’ as the lip quivers and the reluctant embraces become more heated, Theodore grows uneasy at the distinct possibilities. ‘Be good you sweet girl’ as Samantha comforts her as she leaves. 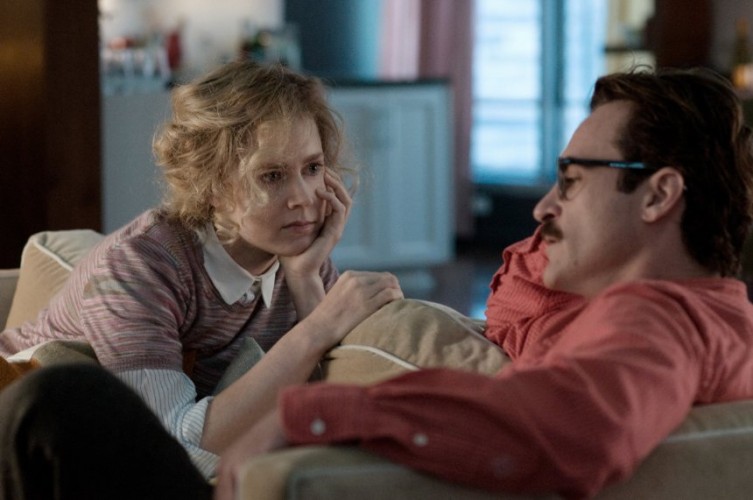 Can Theodore be considered naïve as he suddenly dares to imply Samantha as an ‘affectation’? Yet in the next breath, he becomes mesmerised as she composes a gorgeous piano composition. A highlight reel as they survey the world around them. A photograph, where you could easily crack the frame to express the fragility of Theodore’s state of mind.

The memories they treasure, only representing the downbeat trajectory in where the film’s narrative is heading. The bitter chill as Samantha introduces ‘Alan Watts’ to Theodore, awkwardly invading their relationship as the level of discomfort of not being the only man in her life becomes intolerable. The frenzied behaviour reinforced as one attempt to communicate with Samantha triggers a ‘Not Found’ error, drawing comparisons with ourselves perhaps when the likes of Facebook and Twitter crash.

The intimacy of their conversations juxtaposed with the unsettling realisation he’s a mere one of thousands, shuffling his focus furiously between the men passing by. Could Samantha be familiar with their feelings? Are they as developed as Theodore’s? Our own internet conversations. Are we as inquisitive about a man/woman we’re fond of and the amount of people they could be engaging with on a desirable level?

‘You’re mine and you’re not mine. I’m yours and I’m not yours.’ The ‘Are you leaving me? We all are.’ exchange. The real heartbreak that unfolds before our eyes and instilled into the gentle tones of Theodore and Samantha as she acknowledges the lack of physicality of her world, referring to their time as a beloved book she has written, slowly and regretfully finishing the ending as the spaces between the words become almost infinite. Recognising she can never truly live in his book anymore and this is where she is emotionally at now, but leaving the door open for him to find her. 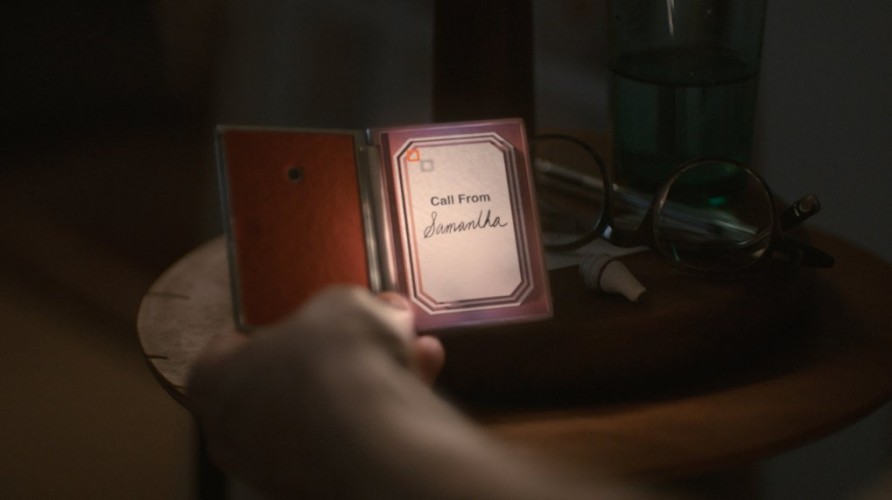 ‘I’ve never loved anyone the way I loved you’. In a time where he could be the most disconnected from his world, it’s this moment where Theodore is truly humanised and at his most clear-headed. The shared connection with Amy as he rushes to her, in the belief she could be just as lonely. Composing a letter to Katherine, deeply apologetic and frank in how he regrets everything he put on her and stating there will be a piece of her in him always. Gracing the rooftop with Amy. Peering out into the vast city. The measured gaze and smile towards each other.

We are all united in wanting our own deep feelings reciprocated by a worthy other, no matter the form. For all our lengthy loneliness, we are never truly alone. The leaning onto a shoulder. The deep sigh of hopeful relief. 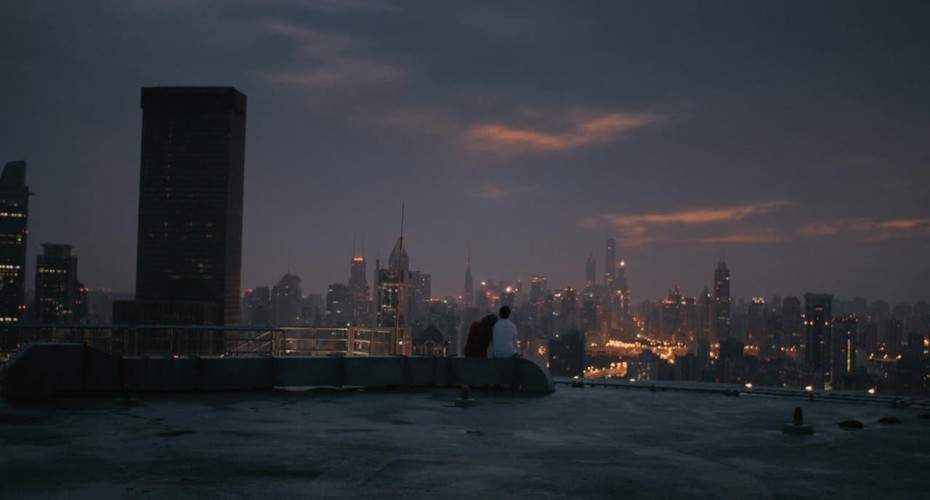 The Power Rangers Movie: Everything We Know So Far

The Grand National: A Guide For Film Fans