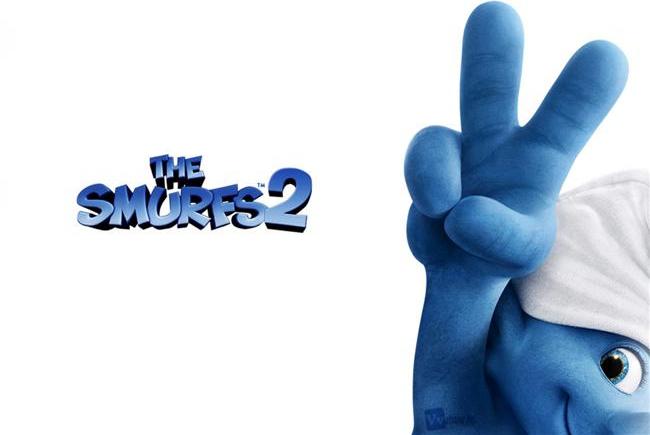 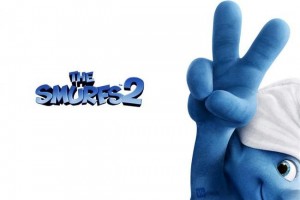 Two years on from the previous film, evil wizard Gargamel has reinvented himself as a successful magician in Paris. His ‘magic powers’ dependent on smurf essence. As his supply of smurf essence runs low he sends his failed experiments at making his own Smurfs, the Naughties, to kidnap Smurfette. His plan is to learn Papa Smurf’s secret spell that turned Smurfette (also one of Gargamels creations which is set up in a fairly neat pop-up book style orgin story) into a real smurf and use it to turn his Naughties into an army of Smurfs. When the Smurf’s learn of this all hell breaks loose(ish) in Smurfland and they mount a rescue mission to France, lead by Papa Smurf and Doogie Howzer M.D.

It would be easy to pounce on The Smurfs 2 and spend the next few paragraghs beating seven shades of smurf essence out of it. In some ways it feels like the film’s been designed for that purpose, but the sake of fairness and the fact that I’m not in the habit of picking on little blue people, let’s attempt to be positive. As Gargamel, Hank Azaria commendably puts in the legwork. Going all out in a scene-munching performance that at least says he’s trying. The Smurfs 2 also has an unusual take on parental values, showing steparents in a positive light rather than the evil invaders from many a children’s film. The fish out of water highjinks that the previous film relied on so heavily have been toned down a little, althought the use of ‘smurf’ as subsitute for seemingly any type of word has gone through the roof.

This is a kid’s film, based on a kid’s cartoon series, based on a kid’s comic first released in 1958. Should we really expect that much from it?  You could say that this film is a harmless story about how all families are trying to find their way. Getting it wrong, yes, but at least trying and loving each other. It’s not claiming to be offering an in-depth look at our world, and it’s happily serving up the most simple of lessons, so let’s leave it there and move on. You could say that.

You could say that this is product. A cynical attempt to get us to part with large amounts of family-sized cinema tickets. Now, Pixar make films for kids to make money (you only have to look at the huge range of Cars and Finding Nemo merchandise littered throughout my house to see that), but they don’t just think, “That’ll do, it’s only for the kids”. They first craft stories that kids and adults care about together, and then the merchandise pretty much sells itself. The Smurfs 2 has the feel of a marketing plan that started the other way round. This is what turns it from being a silly movie that can keep the kids entertained for ninety minutes, into an elongated advert. The Smurfs aren’t here to entertain you; they want your pocket money.

There is one awful, awful moment in The Smurfs 2 where the film tries to ‘reach out’ to the adults in the audience and show us that, “Hey, we’re thinking of you too.” It goes like this (PLOT SPOILER) – Neil Patrick Harris’ stepfather is turned into a duck (you don’t need to know why). His response? “I’m really ducked off.” You and me both, Brendan. Did I mention it’s Brendan Gleeson? Brendan Gleeson, and you give him that line. The best children’s films take the adults along with them because there are universal messages that mean something to people at all stages in life. Look at The Iron Giant. Look at Toy Story 3. The Smurfs 2 decides that the best way to do this is by making thinly disguised puns on swear words so that they are “Down with the grown-ups”. Laugh? No, I didn’t.

The Smurfs 2 is the film equivalent of Smurfberry Crunch – a Smurf branded cereal in the 1980’s that turned kid’s poo blue, scaring the life out of parents across the globe before it was withdrawn.