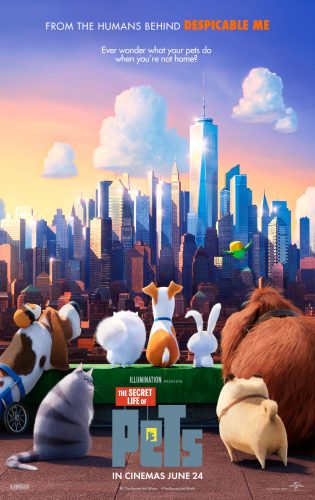 It was one of the internet hits of 2015.  This time last year, the trailer for “The Secret Life Of Pets” was on the road to pulling in around 20 million views on YouTube. No doubt its makers are hoping for similar figures when the film’s released in the States next month.

In the meantime, it lands in the UK on Friday, an animation treading a similar path as some recent TV documentaries and aimed at families – more specifically, families with pets.  After all, what animal lover can resist the prospect of a movie that tells them something new about the four legged member of their household?  Better still, that tells them what their mutt or moggie gets up to while they’re out at work.

That’s the idea behind the film, with the pets in question all living in one particular New York apartment block.  Just about every human there – we don’t see much of them apart from their legs and feet – has a pet and the one at the centre of the story is Max (voiced by Louis C K), a small, friendly dog belonging to Katie.  His world revolves around her, so it’s no surprise that his moist little nose is put out of joint when she brings home some company for him, the shaggy, XXL rescue dog Duke (the voice of Eric Stonestreet).  Inevitably, they don’t hit it off but, while out with their dog walker, they lose their collars, are pursued by the Animal Patrol and seek sanctuary with a group of human-hating animals, led by psycho bunny Snowball (the voice of Kevin Hart).

The first part delivers what the trailer promised – a peek inside people’s homes to see what their pets get up to.  Essentially a longer version of the trailer, it’s also the best part of the film because, as soon as the animals get out into the big world, it becomes little more than a chase movie.  And there are plenty of chases: Max and Duke are usually the quarry and behind them, at various points in the movie, are some especially hostile alley cats, Snowball and his gang and Animal Control.  Down into underground sewers they go, into the Hudson river, up onto building sites – they get everywhere.  So there’s plenty of action to appeal to the children in the audience.

But let’s go back to that first part, in the apartment block, because that’s where the heart of the film lies.  And the central idea would make a great short film – but nothing more.  Here it’s been padded and stretched as far as it can go to fit the mandatory 90 minute format.  There simply isn’t enough there and it’s terribly obvious.  And the support feature, “Mower Minions”, underlines that.  The little yellow guys set up a gardening business to pay for a smoothie maker (don’t ask!) and wreak havoc in their usual fashion.  Standard, amusing Minion fun but, again, a short pure and simple.

“The Secret Life Of Pets” also lacks another ingredient essential to moving it out of the routine.  None of the characters have that little touch of magic to lift them into cult status – quite an achievement when they’re all, potentially cute, animals.  Yes, Max is likeable enough, so is Duke, but that’s as far as it goes.  And their friends are one-joke wonders.  Buddy the dachshund uses the KitchenAid to give himself a massage.  Upper class poodle Leonard listens to Vivaldi when his master’s at home, but on his own, he’s a head banger.  And that’s all they have going for them – that, and the fact that they’re better than Hart’s Snowball, who is just plain nasty and downright unfunny.  The mouthy little critter is enough to put you off rabbits for life.

After all the pre-publicity and the excitement that surrounded the trailer, this is a film that falls well short of its original promise.  With a paper-thin story, and bland characters, the result is best described as a faux paw.  And that’s no secret.

Barbershop: The Next Cut