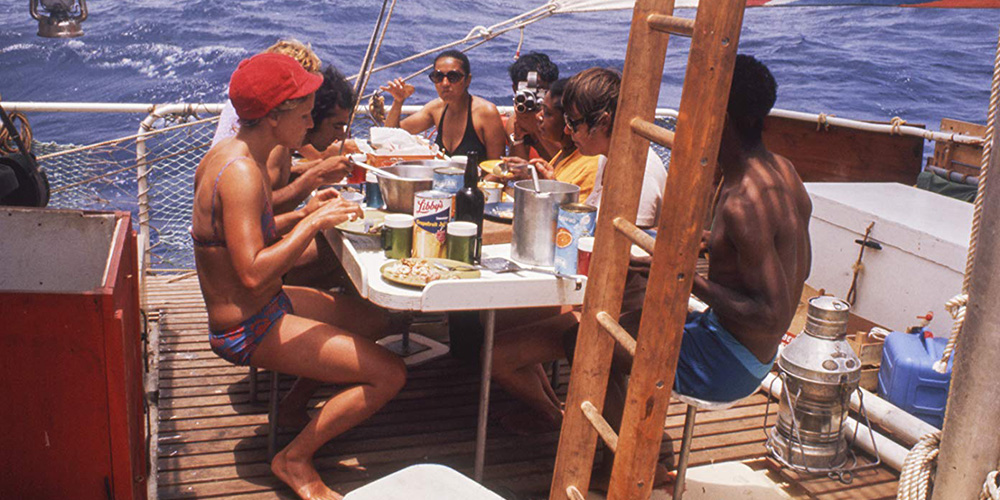 With a name as ominous as The Raft, and a one linesummary that begins ‘In 1973, eleven strangers were placed aboard and thrust into the Atlantic Ocean’, you might might be forgiven for expecting the latest YA dystopian offering, or Cuarón’s hippie sequel to Gravity.

The reality, in fact, is much stranger. I’ll begin again.

In 1973, eleven strangers were actually placed aboard a raft, and thrust into the Atlantic Ocean. The Raft, a documentary, recounts this social experiment, examines the motivations of its founder, Santiago Genovés, and reunites the surviving subjects to lay to rest the events of their 101 days at sea.

The most important question that The Raft plays with is the question of Genovés’ true reasoning behind the experiment. Through his diaries, enigmatically reanimated in voiceover by Daniel Giménez Cacho, he appears every inch the social anthropologist he says he is, fascinated by ways in which he might be able to solve the problem of violence in society – he might be doing the work that prevents wars, he thinks. “The UN has sent us a message, wishing us luck on our mission for world peace,” Santiago declares. 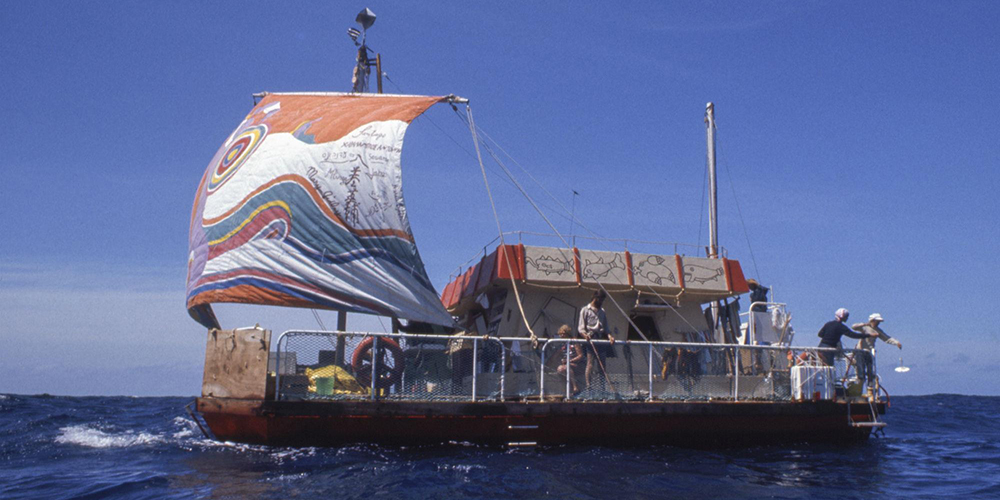 But as Markus Lindeen, the director, carefully splices together over the course of the documentary, Genovés methods didn’t appear to reinforce his lofty goal. Instead, what emerges is the portrait of a man who is determined to be right, determined to incite the very violence he states he’s looking to eradicate. His desire to create conflict seems to be somewhat at odds with his professed dreams of global harmony – he’s revealed to be petty, snide, and more than happy to be a source of toxicity.

The grainy warmth of the 16mm footage from the original experiment is cleverly laid alongside the present-day reunion of seven of the original eleven raftmates, who are gathered on a crisp, Scandinavian-looking, wooden replica of the original Acali raft, sat in the ocean of a darkened soundstage. The cinematography of the film is really one of its triumphs — as we see the shaky footage, buffeted by waves, so we can reflect upon them, forty-five years later, with a clean, focused stillness. DP Måns Månsson and Lindeen do a beautiful job here, creating symmetry in discussion between the surviving subjects, framing talking head interviews efficiently, and using the exquisitely constructed replica raft as a carrier onto which they project the emotions of the experiment.

When you’re working to adhere found footage to new material, it can often be hard to anchor (ahoy!) the two together, but using the medium of the new raft provides a neat bridge that needs no explanation. When the experiment’s tension peaks in 1973, the replica raft is pumped full of smoke and lit red from within like an abstract art installation, adrift in the soundstage’s darkness. Its function as a vessel by which the film conveys tone is truly impactful, and it provides an interesting and surprisingly emotionally weighty function as a backdrop for the interview subjects. 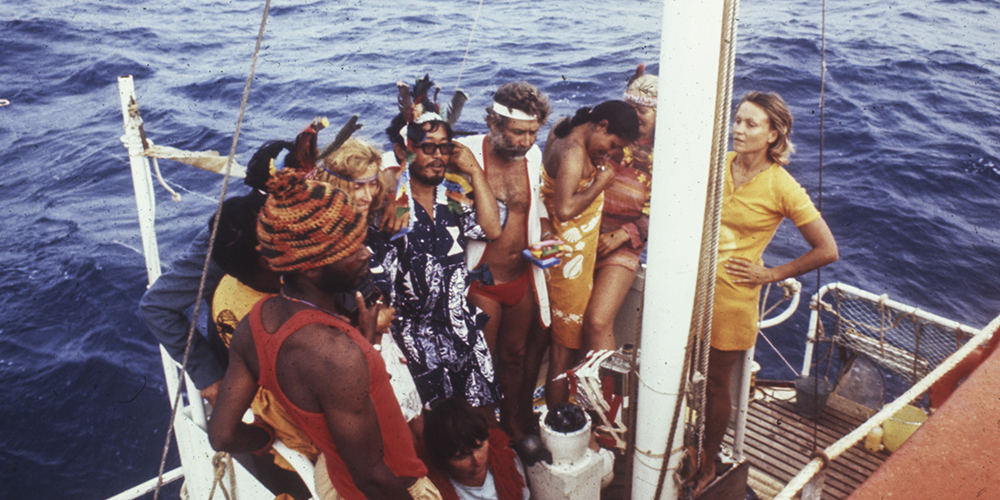 Picture of the 1973 Acali raft that crossed the Atlantic with eleven people onboard in a controversial scientific experiment in human behavior.

“We are back again,” says Swedish sea captain Maria Björnstam, as she steps aboard once more.

Perhaps one of the downsides of reuniting the raftmates with the absence of Genovés (who passed away in 2013) is that, aside from a few empathetic comments from the surviving subjects, a moment of Santiago’s own self-reflection, and a small segment on the depression into which he fell after learning about the media’s scathing treatment of the ‘sex raft’, Genovés isn’t really given a chance to redeem himself. Even the narration, which lends voice to his notes and diaries, has almost an underlying scathingness in the extracts chosen and their timing. If it’s a particular image of Genovés as a provocateur that Lindeen wants, that’s certainly what he gives us.

Armed with questionnaires asking questions like ‘Who do you hate on the raft?’ and his infallible belief that violence and sexuality are intrinsically linked, Genovés sets about stirring up conflict aboard the tiny vessel in whatever method possible. “He wanted us all on the raft to have many reasons to find the experience hard and difficult,” recalls one subject. As Acali drifted further and further into the Atlantic Ocean, his methods for creating drama grew nastier (“He called me a primitive and a thief,” says Fé Seymour) and he became petulant, annoyed at the lack of ‘results’ his test was producing. In an experiment supposedly about understanding how man can engineer harmony, he seemed upset that all of the raftmates were getting along – and they noticed.

“I wanted to find a way to make peace on Earth,” Santiago/Daniel loftily narrates, “she [Maria, the captain] rolled her eyes and looked away.”

There’s a final conversation between the raftmates, aboard the replica, in which it feels like there’s a sadness that Genovés never quite understood that he proved the results of his hypothesis – just without following his set methodology for creating conflict. Though his feelings on the experiment are never fully understood (there’s one clip of footage in the credits in which he deems himself ‘enriched’, which doesn’t quite resolve itself with the Santiago the film has presented), it feels that he missed the entire larger goal of his experiment in his quest for strife.

“We could talk to each with sophistication and depth, and understanding and love,” Fé says to her raftmates, looking around the table, “and isn’t that the answer to violence?”

The subjects share another moment, looking around at one another, before they get up and leave the darkened soundstage, chatting as they head outside into the sunlight – brought together once more by the experiment designed to tear them apart.