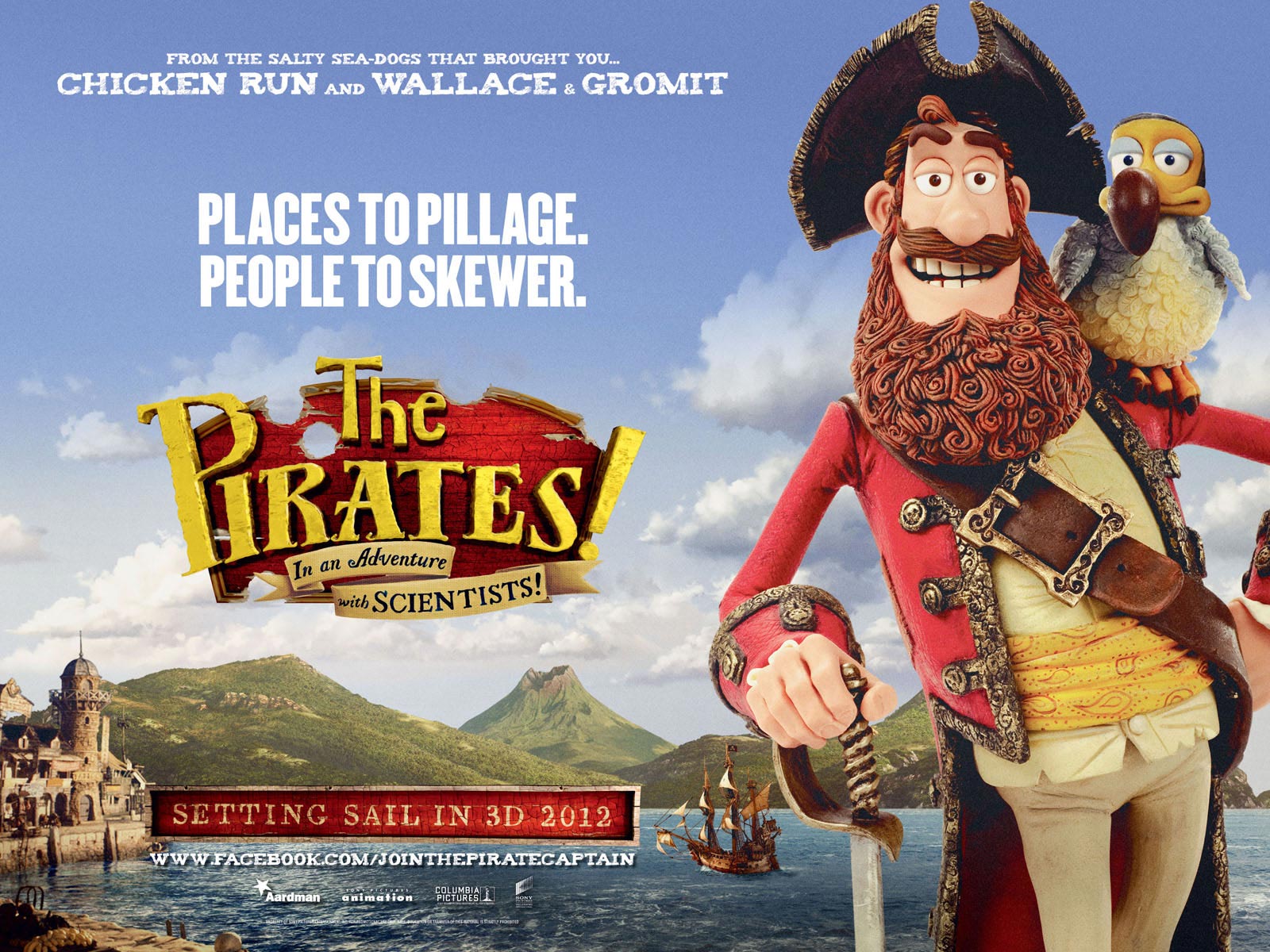 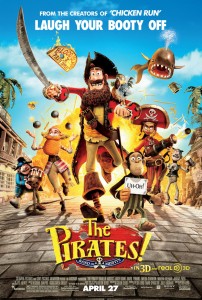 Like most right-minded people I’ve always had a soft spot in my heart for Aardman animation and their impressive back catalogue. Wallace and Gromit, that most British of animated institutions, have always raised many a smile in their short films and the daring duo’s big-screen outing ‘Curse of the Were-Rabbit’ proved to be a considerable success for the studio. As of course was their feature length debut movie, Chicken Run. The studio’s last two features however saw them leave behind their stop-motion bread and butter and take a leap into computer based animation. The final collaboration with Dreamworks studios, Flushed Away, was not a major box office success, but Aardman’s first outing with new Hollywood home Sony Pictures Animation, Arthur Christmas, faired much better and was a hit on both sides of the pond. With Pirates! though, the studio makes a timely return to the world of stop-motion and in doing so has produced arguably their finest work since the Wallace and Gromit short films which made the studio famous.
Based on Gideon Defoe’s immensely popular The Pirates! book series, the plot follows the exploits of the Pirate Captain (Hugh Grant) and his motley crew of salty seadogs. The luxuriously-bearded Pirate Captain is determined to win the coveted Pirate Of The Year award, but faces stiff competition from the likes of Black Bellamy (Jeremy Piven) and Cutlass Liz (Salma Hayek). The Pirate Captain is something of a laughing stock amongst the pirate fraternity however and he gets quite literally laughed out of the building when he arrives to sign up for the competition. The mockery only serves to spur him on however and he sets out onto the high-seas in search of the necessary piles of booty which would prove once and for all that he is worthy of the prestigious accolade.
Naturally this plan does not go particularly well and the hapless Captain seems unable to catch a break after making several failed plundering attempts. His luck appears to change though when he boards a vessel containing a nerdy scientist who turns out to be renowned biologist Charles Darwin (David Tennant). This sets him on course for a whole new adventure involving the ship’s beloved parrot (actually a Dodo), the Royal Society and their prize for scientific discovery, Darwin’s chimp-helper Mr. Bobo and a dastardly Pirate-hating Queen Victoria.
The first thing to say about The Pirates is that quite simply, it’s incredibly funny throughout. It’s got such a great variety of comedy as well, from visual puns and sight gags, to quick and clever one-liners. Stand out moments include the series of jokes revolving around the ship’s journey being shown via an illustrated map, Mr Bobo’s hilarious flashcards and the Pirates uncanny adeptness at disguise. Director Peter Lord strikes a brilliant balance between the sharp and witty and the downright silly, combining the best bits of classic Aardman comedy with a Python-esque dose of daftness. As has been said multiple times in previous reviews of the film, you will miss out on some of the gags on first viewing as they zip by at such a rate it’s almost at Naked Gun levels at times. In this sense I think it is a film which will really benefit from multiple viewings.
The whole voice cast deserves great credit as everyone here is on top form. Hugh Grant deserves special credit for his work as The Pirate Captain as he completely immerses himself into the role and delivers a brilliantly rounded loveable buffoon. Imelda Staunton has great fun as an OTT Queen Victoria who is part Monarch and part evil genius. The Pirate Captain’s loyal crew are also pitch perfect and also brilliantly named, including as they do, The Pirate With a Scarf (Martin Freeman on standard ‘put-upon everyman’ duties), Surprisingly Curvaceous Pirate (Ashley Jensen), Albino pirate (Russell Tovey) and the Pirate with Gout (Brendan Gleeson).
The film looks breathtaking at times; the level of detail and obvious care that has gone into rendering the stop-motion footage is plain to see. The studio has come a long way since the early days of Wallace and Gromit and The Pirates! is now arguably the high watermark in stop-motion animation. It’s an absolute feast for the eyes and you can’t help but admire the sheer time and effort that must go into producing a film such as this.
The plot isn’t the tightest and it does seem to lose it’s way ever so slightly towards the end, but quite frankly the jokes keep on coming and the tone remains as jovial and enjoyable as can be, so it’s only a very minor complaint. The two story strands, the Pirate Captain’s determination to win Pirate of the Year and his adventure with Scientists in London town, don’t always mesh together and it is in danger of getting a bit convoluted, but it really doesn’t matter by the film’s end and Peter Lord deserves nothing but credit for such a unashamedly fun and charming adaptation.
It may seem a little cliché to say this but this is truly a film that both kids and adults will enjoy in equal measure. It’s clever and witty but never loses that anarchic sense of fun which kids of all ages will always enjoy. I really hope the Studio decide to make a sequel as I’d love to see these chaps on another adventure and hopefully we’ll see even more of the supporting characters next time out. The Pirates! Is a very British comedy treasure and yet another critical hit for Aardman.