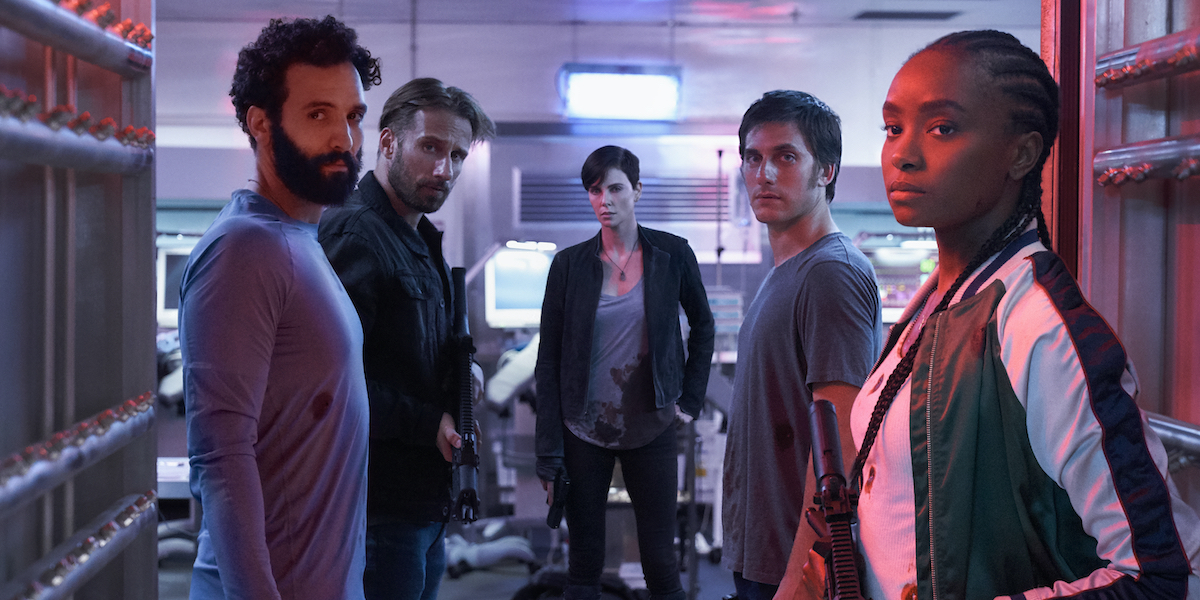 As film companies postpone release dates and movie theatre chains delay reopening, the arrival of the traditional Summer blockbuster in a cinema increasingly seems like a dim and distant prospect. Netflix’s latest offering, The Old Guard amounts to the home entertainment potential equivalent of that now lamented experience.

Based on a series of graphic novels by Greg Rucka, who also writes the screenplay, this tells of a covert group of mercenaries who guard humanity. Their secret is that death for them is not a permanent state. Just as they believe they have discovered another immortal to join their ranks, they become aware that somebody knows of their existence. A fight to retain their anonymity and prevent their enemy from replicating their powers ensues.

The centuries old bunch is led by its world weary most mature member Andy, played by Charlize Theron. She’s aided by Booker (Matthias Schoenaerts), a casualty of the Napoleonic Wars along with Nicky and Joe, portrayed respectively by Luca Marinelli and Marwan Kenzari. Before becoming a couple they fought on opposite sides of the Crusades. KiKi Layne is Nile, a young American Marine serving in the Middle East and the first immortal and potential recruit to the partnership in (literally) ages.

Director, Gina Prince-Bythewood has said she loves the organic diversity of the band of warriors in her film. These are not costume clad, Marvel or DC type creations. Her commendable efforts to present us with a fresh and credible team of heroes is unfortunately not supported by the screenplay. Back stories can be tiresome but this movie proves their importance as the fragments of the squad’s past that we are shown do not adequately define them. Most ill served is Andy, as the film seems to promise a full explanation of her history which is only partly given.

Of the cast, Charlize Theron and KiKi Layne impress most. Theron is a strong solid presence supported by Layne who effectively conveys Niles’s bewilderment and confusion as Andy draws her into the troupe’s clandestine world. That confusion is shared by the audience as neither she nor they receive sufficient explanation as to the cause of her new found condition. Nile might also wonder why the trio she’s compelled to join forces with, despite being hundreds of years old, carry none of the sensibilities of the age in which they were born.

Chiwetel Ejiofor is underused as an ex CIA operative whilst Harry Melling (Harry Potter’s Dudley Dursley) as the movie’s villain, CEO of a pharmaceutical company, does not so much chew the scenery as swallow it whole. His performance is out of step with a film which otherwise eschews the normal tropes of a superhero epic.

Slightly portentous in tone and sometimes a tad dull, the movie does not really come to life until its last half hour with a conclusion which optimistically sows the seeds for sequels. Enjoyable but not engrossing, this is however more of a pleasing diversion than the compelling first chapter of a new franchise.