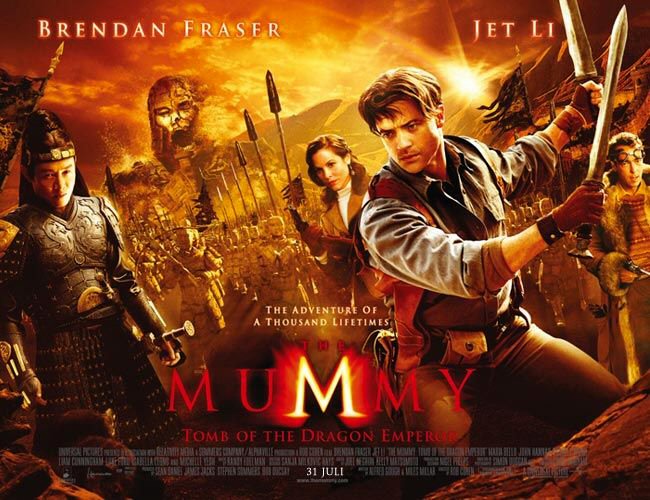 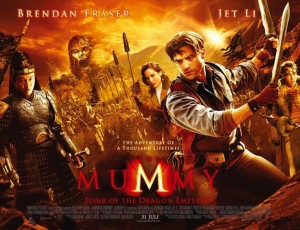 Director Rob Cohen resurrects ‘The Mummy’ franchise after seven years. Instead of keeping it fresh it turns out to be a near disaster. Rick and Evelyn O’Connell are now retired but they’re grown up son Alex (Luke Ford) has become the adventurer his father once was. This third mummy film is set in the Far East where Alex unearths the mummy of the Emperor of Qin (Jet-Li). However a witch (Michelle Yeoh) has cursed the Emperor and his army. Of course all hell breaks loose when the trio awaken him.

The location change to China isn’t the most satisfying decision. It’s a place you don’t really associate with mummies. Egypt had a more mysterious feel to it and people have more common knowledge of its ancient history regarding mummies.

It’s not only the setting that’s a big difference but the character of Evelyn. The absence of Rachel Weisz is noticeable and she is truly missed here. After refusing to reprise her role Weisz was replaced by Maria Bello. There is no denying Bello is a good actress but she is awful in this third outing.  She doesn’t have the charm or screen presents that Rachel Weisz had. She puts on a bad English accent and the chemistry between her and Brendan Fraser is lacking. Luke Ford replaces Freddie Boath as Alex and doesn’t have the ability to carry the movie. His attitude is irritating and his sudden change in accent from ‘The Mummy Returns’ is a mystery. Obviously Cohen doesn’t care about continuity. On a positive note Jet Li is a threatening villain and shows of his fighting skills, even if it doesn’t show his full potential.

Rob Cohen is experienced in the action genre so it’s frustrating that ‘Tomb of the Dragon Emperor’ is limited in thrills. It may look good visually but we have seen all these action packed events before. An army of mutilated corpses is becoming repetitive but the special effects have improved. When you think ‘The Mummy’ series cannot get any more mindless Cohen tops it. We now have giant yetis and a mummy who can turn into a dragon. It’s not all Cohen’s fault; the poor script by Alfred Gough and Miles Millar is mostly to blame. The dialogue is terrible, especially the opening sequence explaining how the Emperor was cursed centuries ago. There is nothing interesting about the story this time around. There isn’t any inventive thinking from the writers, which creates a series of bland events. What should be an exciting action adventure film turns out to be a boring experience.

‘Tomb of the Dragon Emperor’ is an unnecessary film. Bad decisions were made with the casting, the story isn’t original enough and Rob Cohen has made these once enjoyable films into a cartoonish mess. Let’s hope this mummy stays buried.

Dead Hooker in the Trunk