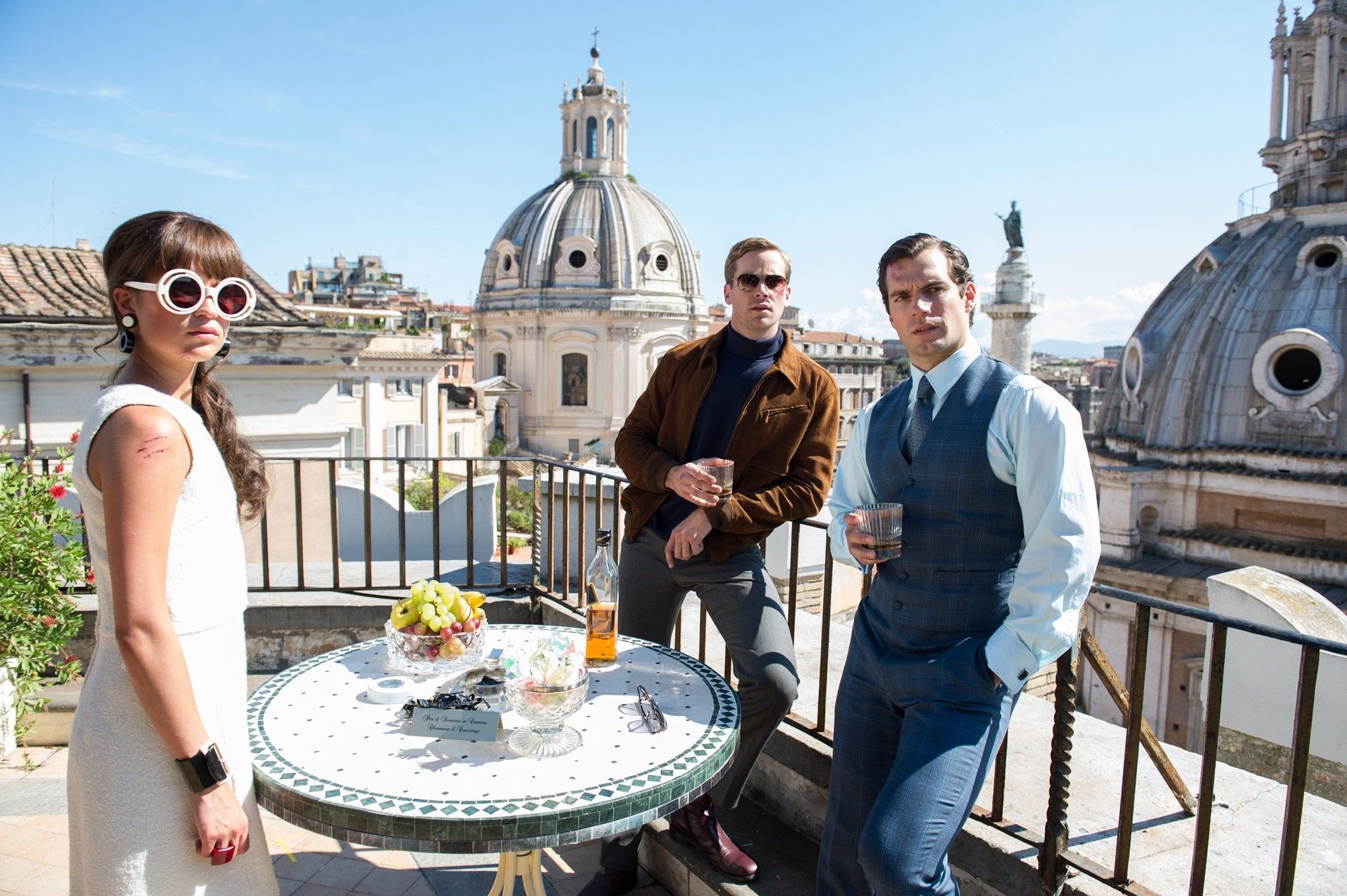 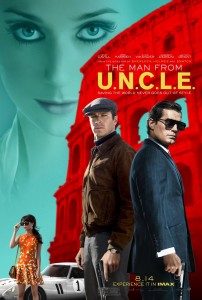 Though it doesn’t indicate the quality of the film in the slightest, The Man From U.N.C.L.E. will always fall under the unfortunate circumstances of having to open two weeks after Mission: Impossible-Rogue Nation. This is unfortunate due to the fact it will mean The Man From U.N.C.L.E. will have less of a cultural impact than the already slight one it was going to have without having to follow-up the last great action hurrah of the summer. This isn’t really relative to the film itself, but while it seems there was never much expected of The Man From U.N.C.L.E., it’s worth noting it is something of a shame due to the fact it now will definitely not come to mean much in the larger pop culture landscape. A shame because the film is actually quite fun and therefore rather satisfying when taken on the terms of what it is intended to be. Coming to us courtesy of director Guy Ritchie (Lock, Stock and Two Smoking Barrels, Snatch, the Downey Jr. Sherlock Holmes films) this film, based on the NBC show that ran from 1964-68 about two secret agents who work for a secret international counter espionage and law-enforcement agency called U.N.C.L.E. or the United Network Command for Law and Enforcement, is everything you’d expect from the director and all you could want from the genre in general. Enlisting Superman (Henry Cavill) and The Lone Ranger (Armie Hammer) to star is another way of suggesting this could possibly be another sub-par take on an old television property, which is a trend in and of itself that feels dated now (how ya doin’ 2000?), but Ritchie and his team (including first time feature writer Lionel Wigram) have somehow managed to cobble together a pile of standard spy movie cliches and make them into something astonishingly direct and abundantly stylish that completely owns what it is and, as a result, comes off as confident and self-assured as Cavill’s Napoleon Solo.

Set against the backdrop of the early 1960s period of the Cold War, The Man from U.N.C.L.E. centers around American agent Solo and his initial mission to befriend and enlist a Berlin mechanic in the form of Gaby Teller (Ex Machina‘s Alicia Vikander) so that he might track down her father who apparently built bombs for Hitler and disappeared a few weeks prior. This mission is abruptly interrupted by Russian agent Illya Kuryakin (Hammer) when the two come head to head over getting Gaby on their respective sides. Shortly after their little run-in, the two opposing forces of effortless suave and blunt force are informed they will need to team-up. Their superiors (Jared Harris and Misha Kuznetsov) tell them this joint mission is for the purposes of stopping a mysterious international criminal organization led by Victoria Vinciguerra (Elizabeth Debicki). It seems Victoria has married into the Vinciguerra family who are wealthy for the shipping business they own. Appealing to her own ambitions, Victoria has taken to the head of the family business after the death of her father-in-law. Vinciguerra Shipping also happens to coincidentally employ Gaby’s uncle, Rudi (Sylvester Groth), whom both the Americans and Russians believe is the culprit in kidnapping Gabi’s father so that they might weaponize the atomic bomb for their own dastardly purposes. Of course, this is all actually done with the hope of being able to manufacture such technology so that it will lead to much money being made, but our heroic duo are hellbent on restoring balance to the world of weapons control and naturally end up in a race against time to prevent a worldwide catastrophe and all that jazz.

It is impossible to divorce one’s self from the expectations we hold for certain pieces of entertainment and therefore those expectations can’t help but to inform our resulting opinion, but this becomes more relevant than usual with The Man From U.N.C.L.E. for some reason. It could be that I truly didn’t expect much from the film, though I am always entertained by Ritchie’s style, and that this does in fact feel like a complete product, a vision of a singular director who is aspiring to ambitions no bigger than to keep audiences entertained while showing us what his version of a James Bond movie might look like. In fact, from the word go the film has a certain energy to it as it more or less contains the same editing style that has infused Ritchie’s work from the beginning. Wherever he may draw his own inspirations from, Ritchie is sure to include plenty from the era in which this film is set. The Man From U.N.C.L.E. doesn’t just look as if it were a 1960’s product because of the wardrobe or the patterns of the wallpaper (though these factors certainly help), but because of the way in which things are captured, first and foremost the glossy style of the aesthetic that imitates any number of global adventures set in foreign cities strictly for the sake of being thrilling and alien. While the Bond’s of that era are clearly an influence as well, the original television show (from what I read, anyway) was something of a knock-off Bond itself and there is certainly a tongue-in-cheek mentality prevalent throughout this iteration as well. The Man From U.N.C.L.E. is rather delightful for not only these stylistic choices and the sneaking self-awareness, but also for the way in which it develops the characters involved by building a plot around their origin story rather than having a standard spy mission dictate the beginnings of their friendship. That said, it is all rather standard as far as the events we see unfold until it throws a not necessarily surprising twist into the mix, but one that gives the third act the necessary energy to stay on par with the rest of the film.

While the likes of Jason Bourne and Ethan Hunt have coaxed the latest iteration of Bond into becoming more serious in his approach to his super-spying (though I realize M:I has begun to wink at the audience a bit), both Napoleon Solo and Illya Kuryakin are here to remind us, along with The Kingsman earlier this year, that the lighter, wittier side of continental espionage can be just as fulfilling. Spearheading these efforts are the performances of Cavill and Hammer. While I’ve seen more of Hammer, it is Cavill who comes to be the more familiar, charismatic personality here. Solo is certainly the more confident and assertive party when it comes to not only getting his job done, but with outside factors as well. His confidence is appealing in a way that Hammer’s thick Russian accent and stiff awkwardness don’t allow him to be. That isn’t to say there isn’t any chemistry between the two of them, there is when there needs to be, but Hammer’s Kuryakin is given more of his personality by allowing Vikander’s Gaby to pull it from him. The film builds each of it’s leading personalities and their opposing methods solidly for almost an hour before the two agree to finally work together on a job and because of this, the moment feels genuinely exciting-as if we’ve just seen an accomplishment we didn’t know we were rooting for. Both Vikander and Debicki get more to do than the typical female player in one of these types of films, especially one set in the 1960’s. Vikander, who was stunning in Ex Machina, continues to do solid work as her performance will no doubt render more impressive and ultimately effective with a second viewing. Debicki (The Great Gatsby) is also in fine form and the movie gets points for putting her in the position of being the brains behind the operation, but gives it’s more villainous moments to Groth’s Uncle Rudi who gets a nice little spiel about fear and pain being the two masters in this life. Also, Hugh Grant makes good in what is essentially a glorified cameo. While The Man From U.N.C.L.E. doesn’t necessarily explore any unknown territory it does well with what it has to work with, conveying it’s unoriginal content in an interesting enough way.