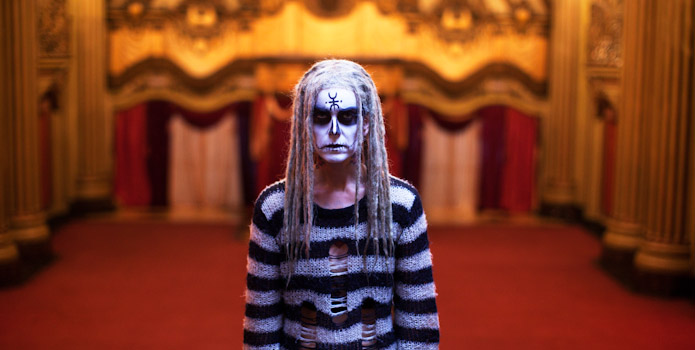 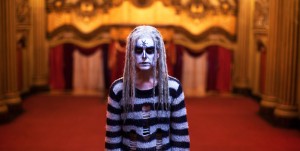 I’ve a confession. Perhaps I’m not best at judging horror films. For a start I’m not really a massive horror fan. I’ve watched enough of the genre in my time and appreciate a well told tale, but I’ve yet to join the small subcults of gorehounds or people who watch slasher films whilst rooting for the killer. I also detest, absolutely detest the current trend of jump scare films, which you could time your watch to for each scare. I’m also a massive scaredy cat when it comes to these sorts of films, more taken to hiding behind the pillows of the sofa than howling with glee at the dodgy effects.

So why watch a film, from a director best known for making mediocre films at best and butchering one of the genre’s classics with his 2007 remake of Halloween? Well first of all, I’m a fan of his work visually. Rob Zombie, in nothing else, has always got his visuals down. From his music videos to the past decade in the film industry, making stabs at making full blown films, he’s always managed to deliver films that are a feast to the eyes, which are only let down by dodgy scripts and a somewhat lacklustre directing of the actors in his films. That’s a trend carried on in The Lords of Salem, but with visuals this impressive, it’s something I can forgive.

What surprised me most is how restrained the film is. Restrained is not something normally associated with Zombie, whose past features have been House of 1000 Corpses and The Devils’ Rejects. There are lots of long, slow shots and unlike a lot of modern films it takes its time setting up for the third act.

The plot (of what small amount there is) concerns a descendant of John Hawthorne, one of the chief judges who presided over the Salem Witch Trials. His bloodline is cursed by some of the witches who he killed, who vow that one of his own blood will bring upon the birth of the Devilchild. Picking up in modern times, Heidi Hawthorne (played by Sherri Moon Zombie) is a local rock DJ in Salem, who receives a package from “The Lords” which contains a track that is both off putting and mesmerising at the same time. It triggers something in her and before she knows it, she’s suffering hallucinations which play right into the hands of a coven of witches. Further muddying the waters between reality and unreality is that Heidi is a recovering drug addict, so we can never be sure if what she is experiencing is real or not.

The minimalistic script works for the most part, just about explaining what’s happening, until the third act when everything breaks down into a sequence of wonderfully evocative images that  are reminiscent of some of Stanley Kubrick’s work in The Shining. If anything Lords, feels almost like homage to Kubrick, though that’s undervaluing the film as it’s still very clearly its own beast. Like the titular track introduced in the film, watching events unfold weaves a slow seductive spell over you, until it feels like you are a part of the ritual just by passively watching it, equally repulsed and fascinated at the same time.

There are very few out and out shocks; more a sense of unease and slowly escalating tension. As Heidi spirals downwards into a pit of addiction, any real sense of time beings to break down, until you aren’t sure if the events are happening over a few days or a few weeks. Deliberate or not, the scenes not focusing on her help balance this and show that, perhaps all of this is in her mind after all (until the credits reveal what really happened that is).

The performances of the actors involved is pretty good all round. Horror buffs will probably recognise some veteran horror actors in amongst the cast, which Zombie coaxes good performances out of. Bruce Davison as a local museum curator brings a nice sense of balance to things and when he’s on screen is a real joy to watch, carving a character out of what could have been an otherwise pretty stock role. Sherri handles her role well too and thanks to her interplay with the other characters is somone you can like. Liking her is vital considering her third act role, which involves her becoming a slightly pathetic person, malleable to the whims of others.

In the end, I’m not sure I quite liked The Lords of Salem, more that I was fascinated by it and slightly mesmerised. I’m not even sure if fans of his past work would like it if they went in expecting the same of the rest of his films. It’s such a radical departure from his usual way of making films, though his stylistic touches are still present as always.

Of his back catalogue, it’s probably his best work because even if it is a little self indulgent at times (casting your wife in the lead and having a character who is basically you from 10 years ago- c’mon!), the level of control demonstrated and the subtle symbolism inherent in each shot means there is always something to keep you watching.

What I really do regret now is not getting the two disk set, as apparently it has a commentary track on it. I really would have loved hearing his justifications for some of the shots as I feel that unlike a lot of modern directors, his justifications wouldn’t have been just because “they were cool” *cough* Zack Snyder *cough* and added some value to what is an otherwise bare bones DVD with only a film trailer on it to count for extras.

In the end, I leave you to make your own decisions. But if you do pick up The Lords of Salem, be prepared for some mesmerising visuals that will stick with you long after the film ends. Just don’t expect to come out of it quite having a film opinion on it, or even what happened. Like the best films, it’s happy to give you what you need, even if it’s not what you wanted.