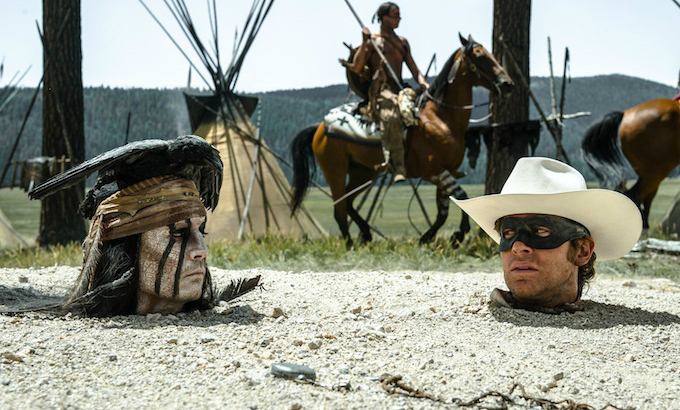 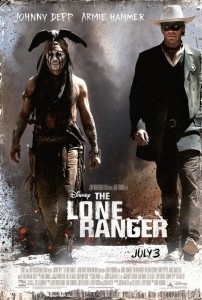 It’s hard to complain about a movie when you know so much hard work and care went into the production of it. The movie adaptation ofThe Lone Ranger has traveled a long and rugged road in order to reach the big screen and along the way I’m sure has seen many more tribulations than the common cinephile has been exposed to. As the whispers of production issues didn’t come into play with World War Z’s box office success a few weeks ago I was hoping the highly-publicized budgetary problems with Gore Verbinski’s latest might play out the same way, but where the reviews were surprisingly glowing for the Max Brooks adaptation it almost seems critics were ready to jump on this latest Johnny Depp adventure before it was even out of the gate. Quite the opposite happened last summer when hopes were high for the Depp/Tim Burton collaboration Dark Shadows, but released only a week after The Avengers the film was lost in the shuffle and word of mouth was not kind. Still, I found myself enjoying the film rather immensely and have since re-watched it more than once on blu-ray trying to find what was so repulsive about it. I can’t help but feel the same way about The Lone Ranger. I can certainly see where some of the criticism is coming from. The biggest issue the film faces is that of a tone and pacing crisis. There is never anything that jump starts the film and allows the audience to settle into their seats and enjoy the adventure about to take place and while there are fits and starts of rather harsh violence the film predominantly tries to take a comedic if not mostly slapstick approach to things. These kind of blunt tonal shifts can sometimes take us out of the experience we are trying to become a part of, but in the end it would be a disservice to this film and the people who might count on your opinion to decide if they’ll see it or not to call this a bad movie. It is not a bad movie, it is a beautifully shot film with a layered story and some fine performances. It took a while to get going and though it doesn’t really find its stride until the last half hour, one has to at least ask themselves what did they expect? It certainly couldn’t have been much better than what we’ve been given.

I imagine the core audience members venturing out to see this latest incarnation of the masked avenger have no connection with the original series that first premiered in 1949 and I imagine anyone who might have loved the original western series is likely too old at this point to even care about this film. That leaves one to wonder who exactly was pining for a big screen version of The Lone Ranger, but regardless it was easy to see what Disney was attempting to do here. Bringing back mega-producer Jerry Bruckheimer and pairing him with thePirates trilogy director and star in hopes of launching another massively successful franchise that would spurn untold millions in merchandise and attractions at their parks. With a rumored budget of nearly $250 million the mouse house is betting big on Depp and his eccentric version of Tonto, but even if that plan doesn’t pan out (and it probably won’t) what Verbinski and his team have delivered here is a meditated account of a modern western. Granted, I’m not overly familiar with the genre and have only seen a handful or so of these kinds of genre pictures from their heyday (and one Buster Keaton silent comedy in film school) it is clear where the inspiration is coming from. This was also true with Rango, one of my favorite films of 2011 that was also directed by Verbinski. While this love for the history of western films will go without recognition by most it is clear the goal was to do for the genre what Pirates of the Caribbean did for the swashbuckling tale. Verbinski is a director who doesn’t know how to make a film for less than $100 million though and that fact creates the conflict of trying to tell a small, personal story on a large (huge) scale. The layered script from Caribbeanscribes Ted Elliott and Terry Rossio along with Justin Haythe (Revolutionary Road) gives our main protagonists a natural set-up to get to know one another while at the same time involving them just enough in the antagonists plot for it to be necessary without resorting to convolution. The problem becomes evident when the final product isn’t the sum of its often great parts. And whose idea was it to frame the entire story with a 100 year-old Tonto telling it to a young boy? One of the many unnecessary pieces that could have been stripped away to make the film a leaner, more subversive film the audience could have truly feasted on.

One of the more common arguments I’ve heard concerning the film is that because of the fact Depp is a bigger star and essentially playing the sidekick the story has been conceived to center more around his Tonto. This never came to mind as I watched the film, it simply seemed a creative way to bring the story full circle while telling a history lesson many of the mainstream movie goers could possibly even become uncomfortable with. There is certainly an aspect to the moral code the film portrays that gives the white man his due sins as a greedy ignorant slob who slaughters culture for what they like to call “progress” but despite the fact I’m in that demographic of white men I believe we’re now at a point culturally where generations like mine are willing to openly admit our ancestors weren’t the best at handling things, but that in no way reflects who we are and dare I say it, the progress we’ve made. To step back and take a look at this in the bigger picture though is not to be irritated that the film is shoving our wrongdoings down our throats, but that a summer blockbuster has something to say and has a point it desires to make rather than simply feeding a modern audience with explosions and overblown action sequences. As I pointed out in my review for White House Down that film film did well with what its intended objectives were and thus received a little higher than average rating, and whileThe Lone Ranger does attempt to meet the objectives it sets up for itself it has much higher standards and thus isn’t as easily able to reach them. That the film itself is too long is naturally a part of the problem, but once it does get to the epic conclusion that has an expertly choreographed and executed action set-piece it somewhat defies the expectations of those who like to dismiss the big action scenes in favor of more thought-provoking cinema by becoming the kind of movie we all really wanted this film to be in the first place. It is a fun and exhilarating piece of cinema that deserves to be seen on the big screen (the whole thing does, really, its been beautifully captured by cinematographer Bojan Bazelli) yet it is the slowly paced introductions that always plague a movie that knows it’s an origin story that gives this film the unflattering characteristic of being dull that isn’t what the final film truly deserved.

The white man is the bad guy here, but more specifically it is two vastly different men who intend to control the country by building the railroad. Played in part by Tom Wilkinson who always knows how to create a devilish demeanor that allows class to preside over menace, but only slightly. On the other side of things you have William Fichtner playing a disfigured, flesh-eating outlaw who has it in his mind to get rich quick off the silver found in Indian country while putting bullets through anyone who steps in his way. The story does well to pull both the Lone Ranger himself, John Reid (Armie Hammer), into the conflict with these men as well as Depp’s Tonto. There are plenty of little subplots that are going after different ideas that involve the likes of a criminally under-used Helena Bonham Carter and Barry Pepper, but while I appreciated the fact Hammer’s titular hero wasn’t given the typical love story with his brothers wife Rebecca (Ruth Wilson who I at first glance thought was Michelle Monaghan) I also thought with her being the main female character here and with such an investment in the events taking place that there was a bigger role for her to play. Hammer, though it was clear in his casting he’d be playing second string to Depp, does a fine job of embodying the earnestness of the young and somewhat juvenile new kid on the block who is well educated, but could stand to get some field experience.The Lone Ranger is essentially John Reid’s ride along with Tonto as the experienced officer showing him the ropes and teaching him lessons that sometimes justice isn’t abiding by the law, but doing what is right in what man has to do to continue to survive while attempting to make the world a better place. There are one too many times where Reid is too stubborn to take Tonto up on these prompts and it does begin to become slightly annoying that he won’t learn the intended lesson, but Hammer isn’t too blame for the scripting and he is able to play deadpan when necessary while also able to embody the mythical aspect to the character by the time we come to the conclusion. It is true that Depp is essentially doing the same thing we’ve seen him do in countless other films that make him the oddball character that is played more for comedy than anything else, but nonetheless I was laughing at him and found him to be more endearing than typical. This is all to say that despite a few serious hiccups along the way and a slow enough pace to turn anyone into a detractor The Lone Ranger eventually redeems itself, classic score and all, and we see glimpses of what this was meant to be that while not great, was pretty damn good. Check back with me in twenty years and we’ll see what history has to say about this one.