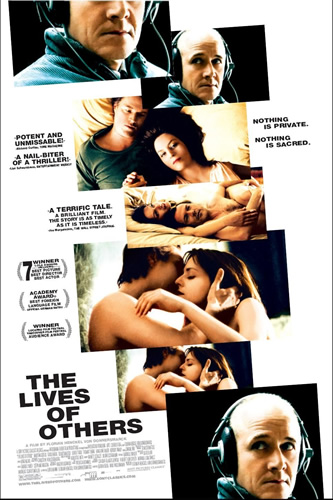 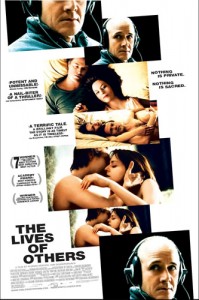 I always try to keep in touch with international cinema. Every time I do I always get surprised and find a good story and a well done piece of film. The last foreign film I saw was from France so I thought I would change it up a bit and see German cinema. This movie also won the 2007 Oscar for Best Foreign Picture so I was interested to see this movie for a while. Plus on some of my favorite sites and podcasts this movie had been brought up multiple times. If you can’t tell, I have been waiting for this one for a while. So would it be worth the wait? Read on to find out…

The Lives Of Others is set in the 1980s in the former East Berlin. Agent Wiesler works for the Stasi secret police and has been given a new assignment. He must wire and observe a writer, Georg, and his lover, Christa-Maria who is also an actress, and try to find any suspicious activity. As the observations continue, Wiesler becomes more and more interested in their lives. He finds out that Christa-Maria is cheating on Georg and goes out of his wave to make Georg catch her in the act. But things are bigger than Wiesler realizes, as Georg starts to plan to write material against East Berlin, a serious offense. As the government tries to catch Georg, Wiesler must decide if his loyalty lies in the state or with his newest obsessions.

The Lives Of Others wasn’t a disappointment but it wasn’t everything I hoped it would be. The story is definitely interesting set in a different time that gives us an inside look into a big brother style government. Its a movie about obsession, but a different obsession than what we are used to. The movie brings up an Interesting question, would you get involved in other people’s lives if you knew everything about them? That’s what happens to Wiesler because the more he learns about the couple, the more he wants to be involved and the more he wants to help.

On behind the camera, I will admit that I enjoyed the cinematography by Hagen Bogdanski. It felt like he had a good collaboration with Florian Henckel von Donnersmarck, who also wrote it I might add. There were some great zooms, but at the same time this was a film that felt transcendent. What I mean by that is that you forgot that you were watching a film and felt like you were back in 1980s Germany.

Unfortunately there were too many times where I was wondering why I should care for Georg and especially Christa-Maria. I couldn’t believe that the Christa-Maria character would sleep with a politician just to advance her career. It didn’t feel as if she truly loved Georg at all and that she was worse than the secret police. She, even after her so called revelation of love for Georg, turned him in at the end of film over to the secret police.

The only reason we root for George is because he is writing against East Berlin’s government, but I felt like I needed more than that to truly care about his fight against tyranny. For example, we root for V in V for Vendetta because he has a purpose. For Georg, it seems that his only purpose is anti-tyranny and for me that wasn’t enough. I will admit after reflection that I did enjoy the plot that matches with the fall of the Berlin Wall. In the end, it was not one person that destroyed East Germany, but people like Wiesler who did small things that crumpled the power of East Germany.

Overall this movie was good, but nothing that will stick with me. It has a good premise, good story, and strong camera work. But the characters could have been stronger which would have made it much more enriching in my opinion. Good film, but not must see.