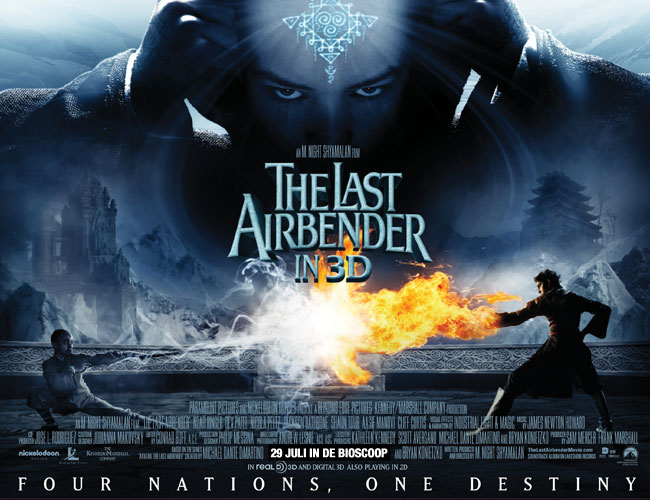 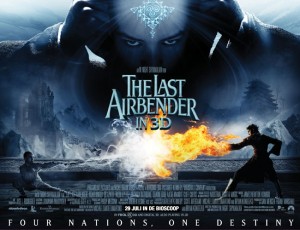 Based on the Nickelodeon TV programme and directed by M.Night Shyamalan. The Last Airbender follows the story of Aang, a young boy blessed with the ability to control all four of the elements, Air, Earth, Water and Fire. As the last of the Avatars, he is forced to quickly mature and develop his powers in an attempt to halt the power-hungry fire nation from enslaving the Air, Earth and Water nations.

Okay, so a BIG budget movie based on a child’s cartoon. Directed by a well-known and highly rated director (Sixth Sense, The Village) Shot in 2D then remastered to appeal to the apparent demand for 3D (Clash of the Titans). I suppose the latter could be forgiven if the final product was at least a decent film…

To begin at the beginning, Aang played by Noah Ringer, is found buried deep in the ice by hunters of the water nation, Katarra and Socca (Nicola Peltz and Jackson Rathbone). He is believed to possess the power of the Avatar, the ability to control all the elements, due to the unusual tattoos he is marked with. All well and good, however, he is then automatically expected to protect all the nations from enslavement by the fire nation.

We witness Aang learning to manipulate water with the help of Water-bender Katarra , then, without any real training, or the ability to control Earth or Fire, they travel from village to village somehow convincing the inhabitants that he is the Avatar.

It may seem that this is a very blunt description of the film, however, it really isn’t. The film lacked any level of depth, as did the 3D… The concept is brilliant; the series has been fantastically popular with children, despite its Anime roots, which has proved not so popular.

The special effects are mesmerizing, and clearly the budget went into them rather than hiring any screenwriters. Fantastic lines such as ‘There’s a village full of Benders’ and ‘If we had known you were a Bender’ are two personal favourites that prove this.

A completely linear story, backed up with amateur acting doesn’t allow The Last Airbender to ever get going and therefore falls completely flat. While the actors themselves would usually deserve a share of the blame, it’s not them personally. What could be expected from a group of movie newcomers? Only Dev Patel of Slumdog Millionaire fame, who plays the estranged Fire Nation prince out to capture the Avatar, has any real experience and he is not blessed with enough screentime to make an impact.

The best way to sum this film up is by comparing it to a superficial man or woman, while from the outside it may look fantastic, and draw you in, once you become better acquainted you quickly realise the lack of any personality or depth.

A disappointment to fans of the television series and the director alike, The Last Airbender is one of the highest budget flops in recent times and a true contender for worst film of the year.