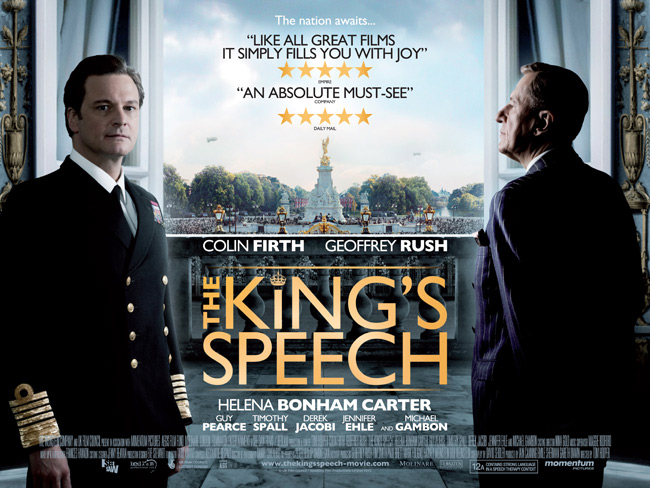 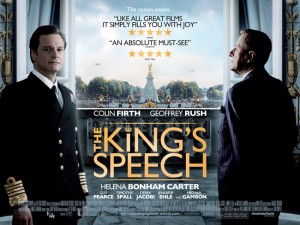 At the time of writing, The Kings Speech, directed by Tom Hooper, has won a Golden Globe, received 25 nominations for various awards and it is more than likely to be nominated and go on to win a handful of Oscars. But what is the fuss about?

The Kings Speech follows the trials and tribulations of Albert Frederick Arthur George, known to his family as ’Bertie’ and to the common person the Duke of York (Colin Firth). He is second in line to the throne after his older brother Edward (Guy Pearce). However Bertie suffers from an unfortunate condition for a man in his ‘public’ position, a seemingly uncontrollable stutter. Along with his wife, Elizabeth (Helena Bonham-Carter) he seeks the help of numerous speech therapists, all to no avail. Until Elizabeth commissions Lionel Logue (Geoffrey Rush) as a last chance to rectify Bertie’s stammer. Reluctant to accept Lionel’s methods at first, Bertie eventually buckles in the hope that he may eventually become a great public speaker, like his father the King.

So despite leaving out the minor elements that shape the film, this is the basic concept. Alas! I hear you cry, a film about speaking? How could that possibly be interesting? And I would agree, until I sat through the film I had no idea what to expect. Despite the momentum it was gaining from various awards councils, the genuine concept of how the film would be portrayed baffled me.

The first thing I noticed about this film was the novelty it portrayed from the first few seconds. A radio broadcaster, preparing to address the nation. A subtle scene in the bigger picture. A gargle on a glass of whiskey, and spray to ‘wet his whistle’ and his impeccable precision in each task he undertook, his repetition of consonants and the exact measurement between himself and his microphone. Then switch to Colin Firth, himself preparing before speaking on the radio. However at the opposite end of the confidence scale. Shaking, sweating and needing constant reassurances from his entourage. It is the clever comparisons between the general perception of the man the public believe in and the man he really is, that immediately gripped me from the start.

The back and forth he shares when first meeting Logue (Rush) is one of the exemplary scenes in the early stages, mostly shown in the trailer in truth, however the witty dialogue and well placed mockery of tradition sets the scene. By this I mean, Logue placing a wager with Bertie, well aware that royalty do not carry money and then offering to place his stake on the

grounds he pay him back. Logue challenges Bertie’s perception of the norm, pushing the boundaries of what Bertie sees as appropriate within the relationship between Prince and Pauper.

The acting is, well beautiful. Firth earns his plaudits with every scene he is in. Making the role personal not just to him, but to the audience. He manages to drag you into the pressures of such a highly looked upon position and the idea that despite having the ability ////for a life of leisure, the seriousness of such a role is not to be underestimated. Bonham Carter is a fantastic inclusion, perhaps an odd choice at first; she fills the role of Elizabeth I with a unique quality unexpected beforehand. While Rush is equally as important and intrinsic to the movie. Add to the mix some fantastic input from Michael Gambon, Guy Pearce and most of all Timothy Spall who is outstanding as Winston Churchill and the stage is set for a true classic.

While we have an extraordinary feat of human endurance currently displayed in 127 Hours, the films share a unique bond. That is the triumph over adversary. James Franco portrays the individual struggle of victory in times of grave personal turmoil. While Colin Firth shows the overcoming of a personal hurdle for the greater good of man.

The Kings Speech is a fantastic example of what can be done with clever writing and extremely talented actors. An unusual idea, which is delivered with undeniable Oscar winning class. While the King may stammer, don’t hesitate to watch this film.