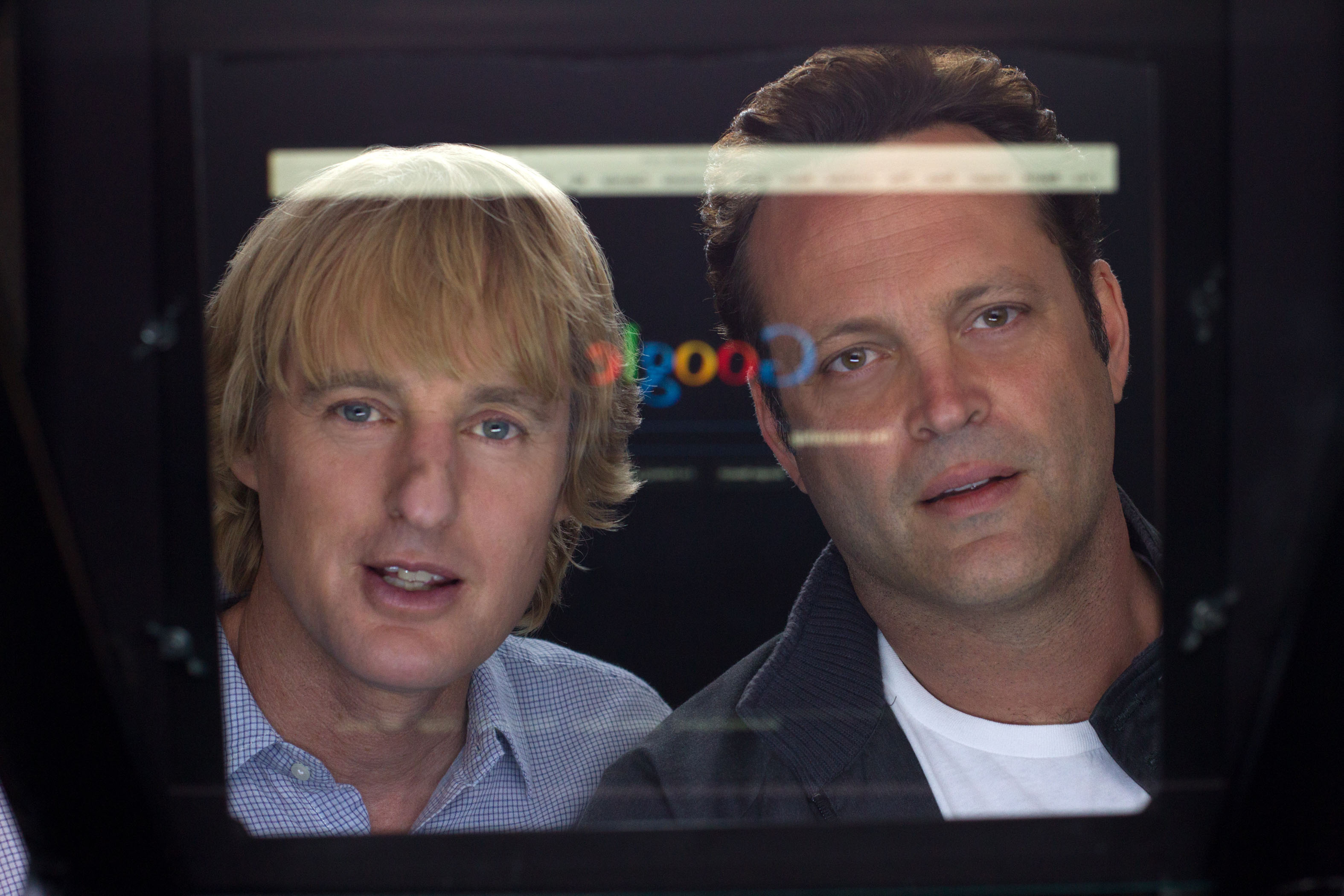 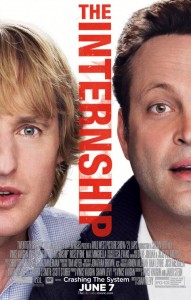 Going into a movie like The Internship you already know what you’re going to get and if you have convinced yourself of what this will be and have set your expectations to a certain level then this PG-13 comedy of misfits will have you more impressed than those initial standards might have inclined you to believe. I personally am a big fan of the people involved here and would have welcomed a Vince Vaughn and Owen Wilson reunion much sooner after their 2005 runaway hit Wedding Crashers, but instead of going for the easy way out and continuing to team up with one another these guys ultimately decided to stray from their core comedy group altogether. Sure, Vaughn made a few with his little crew of friends that include Jason Bateman, Peter Billingsly, and Jon Favreau, but he also made one too many Christmas-themed movies and didn’t fully take advantage of the opportunity that Wedding Crashers ultimately afforded him. Wilson has had similar troubles as of late not starring as a leading man in a genuine hit since 2008’s Marley & Me. He has gained more credibility after the success of Woody Allen’s Midnight in Paris, but his mainstream efforts like Hall Pass and The Big Year didn’t do much to keep his name strong in the genre he became most notable for. Granted we are no longer in the first five years of the new millennium and efforts likeOld School, Zoolander, Starsky & Hutch, and Dodgeball are now relegated to a time long past, but nonetheless I’ve always enjoyed watching these guys individually and the one time they teamed up prior will forever be a point of nostalgia, so I was more than open and willing to give The Internship a fair shot. Maybe it was because the trailers weren’t too impressive, maybe because I expected it to receive a lukewarm reception, or maybe because I finally admitted to myself these guys are getting older and a time will come when they no longer make broad comedies and that this may in fact be the nail in the coffin, but whatever it was I came out more pleased with the film than I ever expected. Maybe these guys have a little more to give after all.

From a story idea by Vaughn who also co-wrote the script The Internship is a simple fish out of water story that takes a few generation xers and places them within the culture of the best example of how different todays work environment is from the traditional nine to five this country is now so steeped in. It is an interesting premise, sure, and the inclusion of Google actually made this as real an experience as it could be made to feel considering these guys would never have a shot at an actual internship for the largest tech company in the world. Though some have criticized the film as being nothing more than one huge commercial for the search engine I would have much rather them used the real thing than to make up a fake company that would only ever come off as a cheap knock off anyway. While the culture of the company and the modernized way in which the business is run provides the backdrop for the story to take place, it isn’t necessarily about the culture of Google as much as it is about these two dinosaurs from the age of the American dream integrating themselves into the modern workforce and accepting the change that comes along with the advancement of technology. Billy (Vaughn) and Nick (Wilson) are old school salesman, they’re talkers and have refused to change with the times and adapt to how the majority of business is done these days: with a computer. When they’re place of employment is abruptly closed and their boss, as played by an underused John Goodman, skips town on them and collects his retirement the boys have nothing but their work history to go on in a day and age where even a college graduate is struggling to find a job. Nick goes to work for his sisters boyfriend at a mattress store while Billy is busy looking for jobs on the internet. When he comes across the opportunities available at Google he enrolls the two of them in the University of Phoenix and gets he and Nick an interview for the internship. After finagling their way onto the Google campus the two oddballs land on a team of outcasts with the manager who wanted to give them a shot in the first place as they compete for the coveted jobs that will be granted at the end of the summer.

The Internship is one of those movies where you know what direction its going in the minute the movie starts. We know that these guys will at first not be accepted into the group and that they will be seen as nothing more than extra baggage but that somehow their old way of doing things will become valuable to the mix and they will somehow help their ragtag team of misfits overcome the odds facing them as well as aiding them in overcoming their own cynical perceptions of the world and themselves so that everyone is happy in the end. It is that easy to know what is going to happen and it would be as equally easy to dismiss the film for being so predictable, but what makes most comedies worth noting is not necessarily the conventional stories or moral lessons they try to teach, but instead we look at how much fun the journey was in getting to the end of the story and in this case how great the chemistry is between the two leads. Clearly the biggest draw of the film is in fact the re-pairing of the laid back surfer guy mentality of Wilson with his slow southern drawl and the high strung, fast paced, rapid fire delivery that consumes Vaughn that combines to create a strong contrasting team with chemistry to spare. While the material they’re working with here doesn’t prove as profitable as that of Wedding Crashers it does present them a challenge of basically pulling none of their jokes from sex or drugs or any of the other common points of reference when it comes to today’s typical comedies. In that it is somewhat inspiring to see guys who have done so much before pick up a challenge such as taking a one note joke like them being too old to understand what makes a huge part of today’s society run and dropping them in the middle of it. While within the first ten minutes or so of the film you can see the comedy simply coming from the random back and forth banter Wilson and Vaughn spit at one another it is once they actually hit the core of the film (and they certainly waste no time dropping obvious jokes, don’t let me fool you) but there is also no denying they are able to get the extra laugh from unexpected places and in doing so keep the movie going at a steady pace with consistent smiles on the viewers faces.

The film certainly won’t be the quote machine that some of their previous efforts have turned out to be and it may not have the rewatch value of the likes of Old School or Anchorman, but that isn’t to say this isn’t completely enjoyable. It is a standard, solid effort of a PG-13 comedy and nothing more. Vaughn and Wilson both do fine jobs commanding their roles while Wilson gets the typical subplot of a love story with the beautiful Rose Byrne who is always a plus to have in your film, but doesn’t have the opportunity to do much here other than be stressed out and succumb to the charm of Wilson’s Nick. The better chemistry comes from that of our two leads with their younger teammates. Josh Brener is only slightly annoying as the new team manager Lyle who likes to refer to himself in the third person and tries way to hard to be cool upon first impression. It’s hard to believe anyone would look at Tiya Sircar as a dork, but her character Neha is supposed to be exactly that despite her fashionable wardrobe and tendency to not go out without wearing make-up. Then there are Yo-Yo (Tobit Raphael) a sheltered, home schooler who might have some kind of Oedipus complex and Stuart (Dylan O’Brien) who is constantly on his phone and typically zoned out from the real world and has no friends yet looks like an Abercrombie model. Despite these obvious conflicts of what is generally easier to accept in society and the hard truth reasons of why these young adults might be perceived the way they are being hidden under a prettier shell there are several montages and a few genuine moments that generate the camaraderie that grows between the group and how the relationship goes from purely tolerating Nick and Billy to embracing them and helping them learn the ins and outs of that little thing called the Internet. Josh Gad, who you may recognize from the recently canceled 1600 Penn., also shows up in a few scenes to good comic effect, but I wish we could have seen more from him. There are plenty of other little flourishes in the cast that only add to the overall competent factor of the film and director Shawn Levy (Real Steel, Date Night, Cheaper by the Dozen, The Pink Panther, Night at the Museum) is more than experienced in these generic kinds of comedies that it feels like he could have made this with his eyes closed. For all we know, he did because it does naturally give off that non-invested vibe but it also never fails to make you feel welcome and that is at least what is always so nice about the search engine this whole thing is based around.

This Is The End