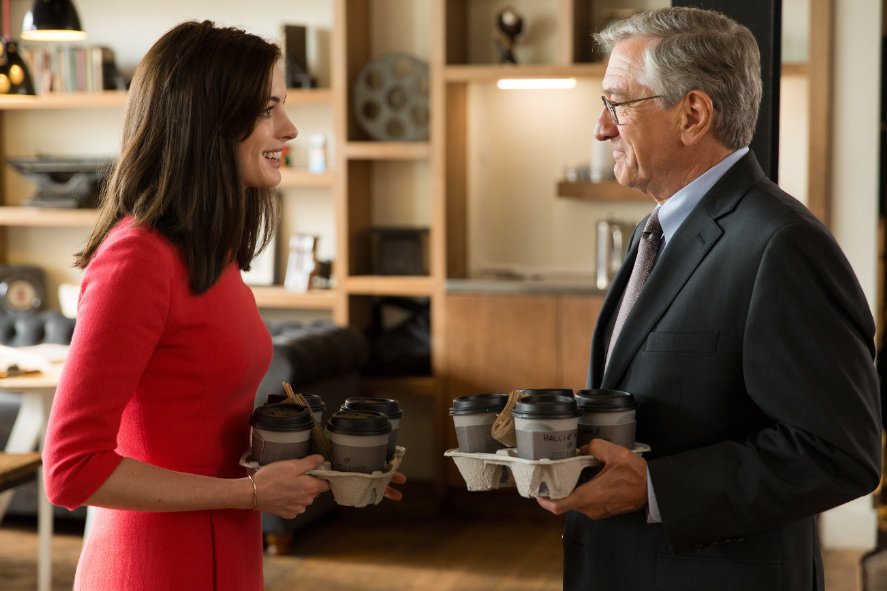 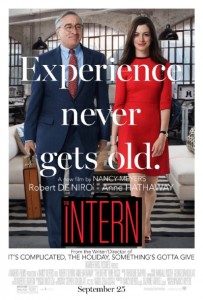 At 72 Robert De Niro is just about starting to slow down in terms of the number of films he is making each year. In fact The Intern is only his second film in almost two years. To me that suggests that the films he does choose to appear in will have been more closely scrutinised and hopefully be chosen due to their potential to be great films rather than a quick cash injection for the Robert De Niro retirement fund should he ever do such an unfair thing as retire! (Ahem! Little Fockers…)

Nonetheless combining De Niro with Academy Award-winner and the perpetually likeable Anne Hathaway seemed a great call by the equally chooses writer/director Nancy Meyers, who having directed just six films since 1998’s The Parent Trap, is also seemingly conscious in terms of which films she puts her name to. It’s worked too, with her reputation for writing and directing her own films leading to hits such as The Holiday, Something’s Gotta Give and What Women Want.  If nothing else she’s certainly capable of handling the big name actors and actresses she uses in her films with an array of talent that would form one of the most desirable and interesting dinner parties you could possibly imagine. The likes of Jack Black, Mel Gibson, Jack Nicholson and Kate Winslet to name a few!

All of this certainly seemed impressive on paper and prior to watching The Intern I was certainly intrigued – not something that happened when I first heard of the films concept – brushing it aside as another run of the mill ‘date-night’ movie that have become a staple of cinema in recent years thanks to their reliable box office pulling power and strong return versus the relatively low budget it can take to make them. Alas I digress…we’re here for a review right!?

The Intern follows retiree and widower, Ben (De Niro), who following the death of his wife has become bored with the life he now leads. Ben applies and is accepted into a ‘Senior Intern’ programme ran by a fashion start-up company ran by its founder Jules (Hathaway) determined to throw himself back into the world of work, Ben sets about proving to the reluctant and ever-busy Jules he is far more of a help than hindrance.

From the offset The Intern allows De Niro to prove he is a great actor, which was unexpected as often that may become lost in a film such as this that could have focuses on the slapstick element of a retiree returning to a new modern world of work. Instead Bens dedication and old-school mentality is the perfect compliment to the almost perpetual motion that is Jules’ life. De Niro almost feels like the old guy in UP! but in real life – you can’t help but absolutely fall in love with Ben’s persona – it’s relatable to almost any age group as one can see shades of their own fathers or grandfathers in Ben. Hathaway’s character Jules is almost a carbon copy of Ben only forty years or so younger – even if she doesn’t know it. She’s determined to maintain the quality of the company she started from scratch before it grew into a much bigger enterprise than she could have imagined.

The scenarios thrown up by the film are grounded in reality and aren’t too wacky or over the top that they focus on gaining cheap laughs from the audience – instead we grow to like the characters even those that aren’t at the forefront, with the supporting cast proving more than just plot fodder.

The interactions between Ben and Jules also reflect a real relationship and one that doesn’t become a father-daughter relationship that we might have expected. Instead a friendship based on a mutual respect for each other grows and this is perhaps the most telling aspect of the film as it certainly might not have worked had the writing and directing of Meyers not allowed it to grow as it does.

The Intern does run a little long at just over two hours you start to feel it’s gone on for quite a while as the final third begins to draw to a close. It’s strange though as looking back I couldn’t pinpoint any major time consuming moments that could have been cut, but perhaps the film would have benefited from more stringent editing.