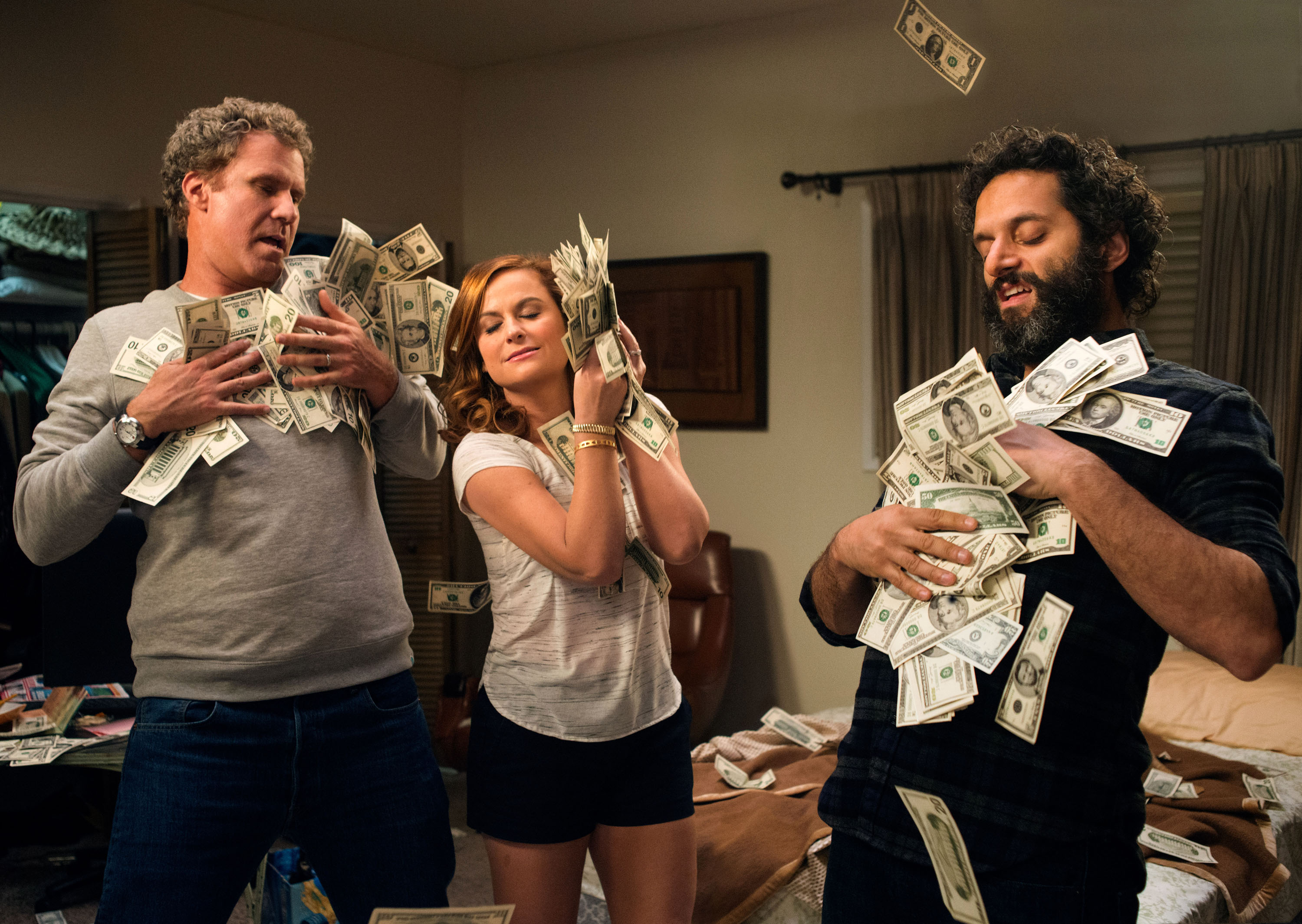 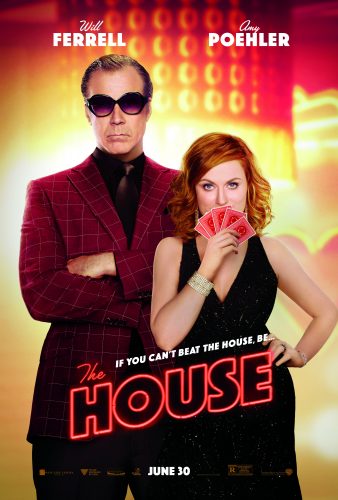 It’s a sad day when one of your comedic icons who you grew up watching seemingly puts the nail in their proverbial comedy coffin, but that seems to be where we’re at with Will Ferrel’s career. Ferrell needs another Adam McKay collaboration and stat. After a rather stale streak post Anchorman 2 (which I loved) that has included Get Hard, Daddy’s Home, and Zoolander 2 I was personally hoping for something of a turn in what would be Ferrell’s first R-rated comedy since Get Hard which also happens to be the directorial debut of Andrew Jay Cohen who has written or co-written the screenplays for both Neighbors films as well as last summer’s rather surprising Mike and Dave Need Wedding Dates. Needless to say, Cohen and writing partner Brendan O’Brien have crafted a premise that is a perfect jumping off point for a Will Ferrell comedy, but it’s pretty clear from the get-go that this is going to be one of those comedies that falls into the cheaper-feeling, amateur hour-type category. The House was never going to reach the intelligence levels of Ferrell’s work with McKay, but it isn’t able to even touch something like Blades of Glory which too felt cheap, no doubt, but was so consistently outrageous that it held itself up. Rather, The House is a movie that would have been a hotly-anticipated comedy five to eight years ago as it is the first time Ferrell has been paired with the ever-endearing Amy Poehler, but as things stand today there are seemingly no other marquee movie stars left besides *maybe* Kevin Hart, but even he has to be in the right vehicle for the box office to reward him. Ferrell is the last of a nearly dead breed and you can see the wear on his exterior as he sleepwalks his way through The House. It’s not only a little sad to behold, but disappointing in that I’ve previously always looked forward to a Will Ferrell comedy and even if no one else in the world might understand why-I was still excited for The House in hopes that Cohen might offer a new voice in the comedy world, someone who was hungry to jump start what has felt like an unusually stale output from the likes of Ferrell and his normal co-horts over the past few years, but instead of reinvigorating anything Cohen has made a film that fits snuggly between the letdowns that have been Ferrell’s last few films.

You can bring the fun of a casino or bingo hall to your own home, just like in ‘The House’ at Sailor Bingo

Speaking to that aforementioned premise, Cohen and O’Brien’s screenplay pits its two leads as an average suburban couple who severely embrace their suburbaness. They love their upper middle class neighborhood (where they have a house they could probably sell and make at least the first couple years tuition off of if they were truly desperate) they live in, they enjoy attending community meetings, and they have become best friends with their only child, daughter Alex (Ryan Simpkins), who they are now losing to college. They are about to become the owners of an empty nest (another reason they could afford to downsize) and while I admire the fact Alex is a cool enough kid to recognize how cool it is that she has parents like Scott (Ferrell) and Kate (Poehler) that doesn’t mean she doesn’t want to be a normal high school senior and spend the summer before her freshman year at Bucknell University with friends she won’t see as often come fall. The bigger problem that adjusting to the changes each member of the Johansen family will soon be facing though is the fact Scott and Kate have no money to afford Bucknell’s tuition. They were expecting Alex would receive a full-ride scholarship through their local chamber of commerce in their cozy Fox Meadow, but at the last minute corrupt city council member Bob (Nick Kroll) persuades the majority of the community to dedicate their resources to a community water park rather than allowing only one family to benefit from their annual budget. This leaves Scott and Kate scrambling for ideas as to how to fund their daughter’s future. Enter Scott’s best friend Frank (Jason Mantzoukas) who is the midst of a divorce with his wife Raina (Michaela Watkins) and who desperately needs the vacation he, Scott, and Kate have been planning to Vegas. And so, despite the fact the crux of the plot depends on Scott and Kate not having enough money to send their child to college they presumably drop a couple grand on a trip to Vegas where Scott gives Frank the bright idea to start an underground casino in their house where they might both make enough money to remedy their problems. Of course, we all know such a plan won’t possibly turn out for the best, but Scott and Kate decide to go along with Frank’s plan anyway which eventually sees them become unrecognizable in their roles as “The Butcher” and “The Burner”.

At a lean eighty-eight minutes one of the few redeeming qualities the film has going for it is the fact it doesn’t overstay its welcome. The House quickly sets up our conflict and does so in the way comedies do by adding in an ensemble of characters that are meant to provide small moments of comedy around that main conflict. Another aspect The House has going for it is indeed the troupe of strong comedy players sprinkled in throughout the supporting roles that offer isolated moments of funny, but aren’t strong enough on their own to create a feeling of a cohesive sense of humor across the whole of the movie. Whether it be the fresh presence of someone like Rory Scovel who I wasn’t familiar with prior and who brings a sense of obliviousness to the proceedings as he is more than willing to participate in whatever he might be included in or Lennon Parham and Andrea Savage as two rival moms in the community that tend to butt heads on every topic that comes up, but mostly a potluck that left a sour taste. There are other recognizable faces such as CedricYarbrough (Reno 911), Allison Tolman (Fargo), and Rob Huebel (Childrens Hospital) who, along with the main players, each try to bring their own special something to the mix that makes this experience enjoyable to a certain degree even if it doesn’t make the movie overall that much better. Examples of this would include Huebel’s do-gooder cop who always gets caught in unfortunate circumstances or the blossoming relationship that isn’t between Kroll and Tolman’s characters that elicit, at the very least, smirks from viewers who are familiar with these character actors and accustomed to their quirks. This even goes for Ferrell and Poehler who have fine enough chemistry with one another and very clearly understand the line they’re walking between what roles people expect them to fill through to the type of personalities they actually possess and/or come to inhabit. Many of the subplots and supporting players fill in as fine enough comedy fodder from time to time, but even as Ferrell and Poehler have something of an interesting approach to their characters in that they’re coming from a place where these people are really proud of what they’ve built despite not seeming to really have an idea of what’s going on or how to actually “adult” the end result still falls flat. In spite of Scott’s legit fear of numbers and the fact the script gives us no indication as to what either Scott or Kate do for a living these two have made a comfortable life for themselves and so to see two comedy minds like that of Ferrell and Poehler’s take on such a persona that would then evolve into this warped sense of reality because of this growing lie would seemingly be nothing but a lot of fun, but for one reason or another Cohen simply doesn’t know how to harness such energy.

What are these reasons, then? Why-given the talent involved here-could Cohen not craft a better film and a funnier comedy? One could go on and on about how much more difficult it is to craft a successful comedy than that of an effective drama, but that isn’t the case with the The House. The case with The House is more the script only does half of what it’s supposed to with Cohen and O’Brien assuming that they have a funny enough cast to prop up the funny side of their story. A movie is first and foremost only as strong as its script and with Cohen and O’Brien only providing a premise and a structure upon which that premise plays out what is absent are the key ingredients that would make any film worth watching: authentic and interesting characters. While Ferrell and Poehler do what they can what they’re more or less given are vague outlines of who these people are. Moreover, they are given the outlandish circumstances of the plot for which Cohen and O’Brien seemingly hoped their comic actors would react to in hilariously comedic ways. Past only being funny, comedies have to have characters we care about, that we become interested in, and want to ride out the remainder of their conflict with even if we know it has been comically blown out of proportion. The Housesimply doesn’t offer anything of such substance. Rather, it zips by and hits the expected beats of a generic studio comedy in order to check off all the boxes that need to be checked in order for this to be called an actual movie. Admittedly, Cohen does seem to want to try some things out aesthetically with his feature debut as the color palette changes to a more monochromatic canvas of dark grays and steel blues in some sequences and faded brown with hints of gold in the homemade casino ones over the course of the film. While it’s easy to detect this shift in tone from the earlier, bright images that paint the picture of a scenic suburban neighborhood the fact the only reason such a shift takes place is because these characters we don’t actually care about are getting deeper and deeper into their lie makes it something that doesn’t really register as an artistic choice. That’s the worst of it all, in fact, in that The House itself doesn’t even care if its audience cares about its characters, but would love nothing more than if we pointed and laughed at them. This doesn’t work for all the reasons stated above, but when we do laugh it’s mostly thanks to Mantzoukas so thank God, but not this movie, for Jason Mantzoukas.