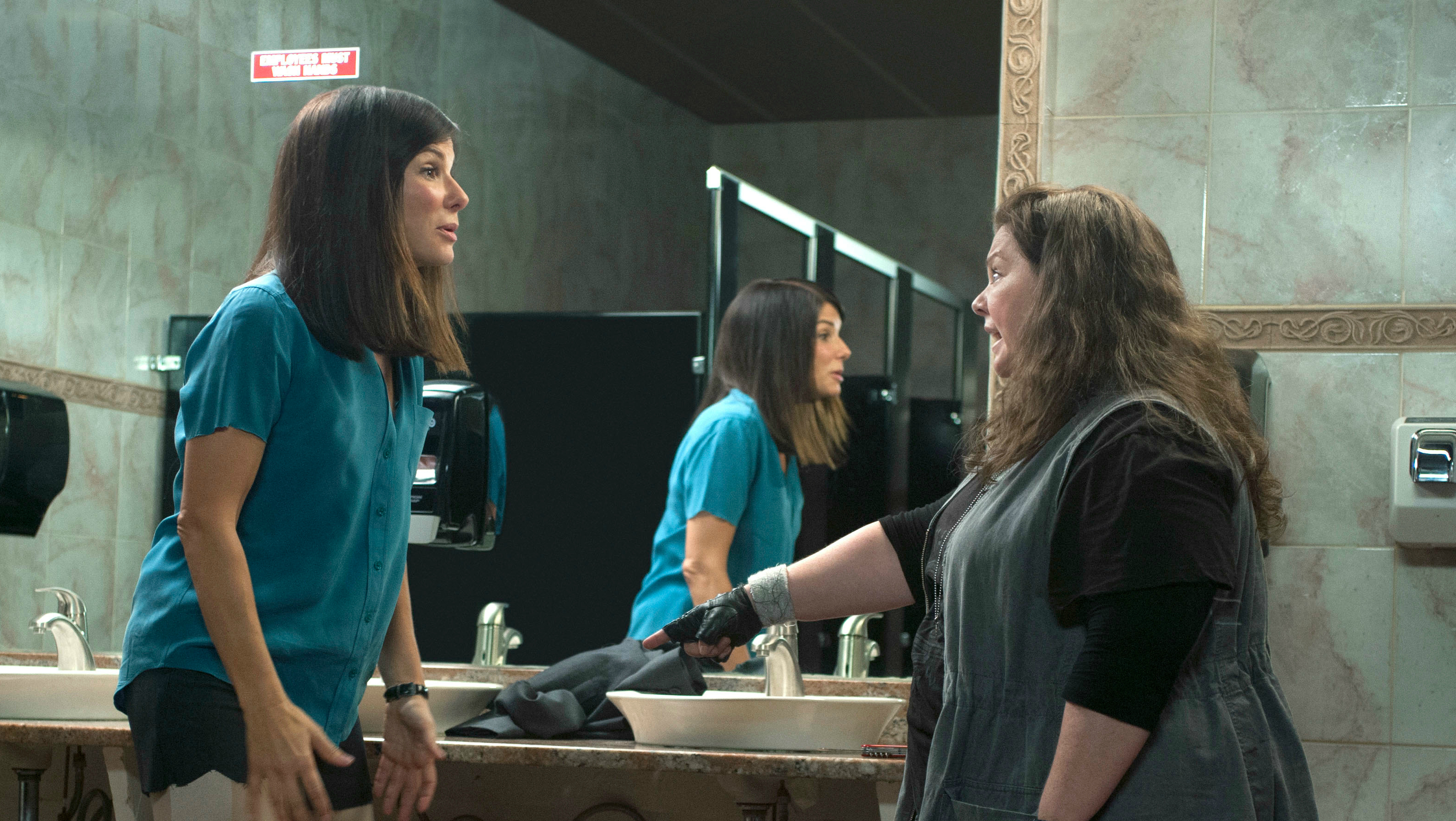 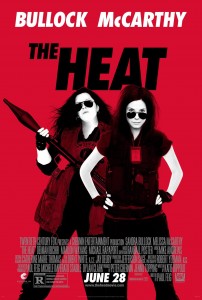 Much has been made of the fact it has taken this long to get a buddy cop film with two female leads made. There is certainly merit to this argument as The Heat is a ridiculously fun time at the movies even if the premise has been worn out for a good twenty years now. The plot is hardly what matters here as the real story is who’s finally filled the roles of those two lead women and the chemistry between co-stars Sandra Bullock and Melissa McCarthy is so strong it will surely convince anyone doubting the power of women at the box office. The film will no doubt be a hit as well as officially confirming McCarthy’s status as a certifiable draw. She did well with the average (though some would say downright terrible) Identity Thief co-starring Jason Bateman who is a fine comic actor, but not necessarily a big box office draw on his own. Next to American sweetheart Sandra Bullock and under the direction of Bridesmaids helmer Paul Feig, it is almost a guarantee that if there were a chance for women to get their fair share of summer blockbusters then this would more than be the way to go. There is plenty to complain about when it comes to The Heatas it doesn’t possess the effortless balance of comedy and heart that the directors previous, female-powered, film so easily conveyed. Instead, The Heat doesn’t need or even try to be anything more than a raunchy, no holds-barred action comedy that is more that able to be held up against any number of buddy cop movies that feature two male leads. I’ve never taken issue with the idea of women getting the short end of the stick when it comes to having the responsibility of a big budget studio comedy or any other genre on their shoulders, but I’m also a white male which puts me in the most favored demographic and therefore I don’t really have much room to speak. What I will say is that I had a consistently good time throughout this well-intentioned if not mean-spirited piece of fluff that isn’t here to say anything new or break any ground, but simply to make us laugh and in that regard it succeeds with comedy to spare.

With her first feature screenplay Katie Dippold has delivered on every cliche she could have possibly thought to include as more than anything it feels she sat around watching the likes of 48 Hrs, the Lethal Weapon movies, and hundreds of other less popular incarnations of this set-up. That isn’t a problem though because Dippold has taken the more ludicrous aspects of those movies and applied them to a surprisingly plausible setting here. There isn’t much in the way of outlandish one-liners just as the speaker pulls off in their car leaving a slick impression, no. Instead, when Bullock’s FBI agent Ashburn attempts such a move here she is quickly thwarted by the fact she has to pull into ongoing traffic and the transition isn’t nearly as smooth as she’d hoped for. There are at least a dozen of these little self-referential moments throughout the film that if you’re an avid enough film-goer you will catch onto. The fact the people behind the scenes are well-aware the type of movie they’re making is comforting more than anything and if you’re not as well versed then you won’t get as many laughs, but there is still plenty to go around. Ashburn is the uptight, forty-something who has dedicated her life to her career (so much so that she chose to go with it over her husband) and despite being more than capable at her job her social skills are about as good as a cardboard box. When she is sent to Boston to track down a mysterious drug lord she is forced to team-up with local hot-shot Mullins (McCarthy) who destroys anyone that gets in her way and may as well run the city because even the captain of the police force can’t seem to control the powerhouse that she is. As these things go the odd couple dynamic works for a bit providing awkward exchanges and set-ups until an event occurs that brings our two protagonists together for the greater good of the simple plot. We all know where this is heading and we honestly don’t really care about who the mole turns out to be or what his motivations are, all we really care to see are the antics that exist and the relationship that is formed between Ashburn and Mullins. Bullock and McCarthy play these characters perfectly, no doubt improvising many of their scenes, that lead to not only a sense of satisfaction in a tired premise, but a rejuvenated idea that sometimes you don’t need anything more than a few great performances to have a pretty good movie.

From the opening scene in which Bullock’s character is expertly set-up and the actress perfectly delivers one-liners that give us her idea of funny and her off-putting personality to our first encounter with McCarthy as she wreaks havoc on a number of guilty parties I was entertained if nothing else. Some folks will complain about the fact this is showing nothing more than women conquering the rather dumb genre of buddy cop movies while others will talk about the way in which McCarthy’s character is so reckless with how she treats her suspects and the foul things that come out of her mouth. The fact of the matter is the film seems aware of this even, moving further past the simple fact of, “Hey, we’re women and we can do this too!” That obstacle is played out and overcome with a minor albino antagonist while the more pressing issue of if Mullins actions are as unruly and unlawful as those she is arresting people for shouldn’t even be debated. It is easy to assess the film with its lack of story as one that hasn’t thought too hard about itself or put much into its development other than changing the sex of the two leads, but as the heart of the movie is in the relationship between Ashburn and Mullins so the most development likely go into those characters. Yes, Mullins chases down an African-American and drops him off the side of a building and yes she certainly has an unorthodox way of conducting an interrogation, but that is what makes the character so strangely intriguing and when played by someone with the talent of McCarthy who knows so well how to spin a line and play physical comedy to perfection we don’t, or shouldn’t, get caught up in the politics of is this helping the case for women in cinema or is it unethical to sometimes shoot first and ask questions later? Of course it’s unethical and of course that may not shine the best light on this particular woman every time, but that is simply who the character is and to play her as anything less would have been to take away the tension, the comedy, and ultimately the effortless arc in which Mullins and Ashburn go from easy enemies to sisters. Not only this, but as the film draws to its conclusion where the already greenlit sequel is so nicely set-up, we get a few heavier moments that give McCarthy and Bullock a chance to show a little more range, add a little more weight and in many ways redeem anything that has come before that you might have disagreed with.

As long as there will be movies and society there will be debates such as this, but my point is that the movie is well aware of these things and has taken the opportunity to place two women at the head of a buddy cop flick not with the intention of trying to make social commentary or say anything necessarily important other than the fact of how well these two actresses play off one another. You could even make the case for the film being completely pointless, in many ways it probably is, but that doesn’t mean it isn’t fun. It is a rollicking good time as even now, hours after exiting the theater, I can think of three separate sequences that had me rolling. That, on top of the countless one-liners McCarthy delivers with such precision, means I likely missed a few jokes in between I was laughing so hard. Though this is clearly about our two female leads they are given a more than healthy supporting cast that includes Academy Award nominee Demian Bichir as Bullock’s boss, Marlon Wayans in a more minor role that keeps him in check just as he needs to be, as well as MadTV and SNL cast members Michael McDonald and Taran Killam. McDonald is especially interesting in the role of a type of mob boss/druglord that plays so much against the persona he built on the sketch show it is as disturbing as it needs to be while maintaining the fact he is more than capable of being funny. It is a surprising bit of casting, but it works really well. The same can be said for character actor Michael Rapaport who plays one of Mullins disgruntled Boston brothers (Joey McIntyre plays another of her brothers) that resemble the family from The Fighter only with a large cast of testosterone over estrogen. It is in little touches such as the knick knacks that Mullins’ father keeps around the house and passes down to his loved ones or the pet that Ashburn has, but not really that keep the laughs coming throughout. While the movie doesn’t inherently possess that effortless balance to its vulgar and sweet sides the relationship and chemistry between Bullock and McCarthy comes so easy I would pay to sit and watch a sitcom with these characters despite the fact I’m sick of police and detective procedurals on TV. It was never about the story, but director Feig weaves his two dynamite performers through such a nicely structured if not sometimes slowly paced movie that it is impossible to take your eyes from what this project was really about. What is that you might ask? Continuing to prove how funny women can be without depending on romance as the crux of the plot. The Heat proves such a thing is possible and can be successful, what kind of cues will be taken from this? I’m anxious to see.